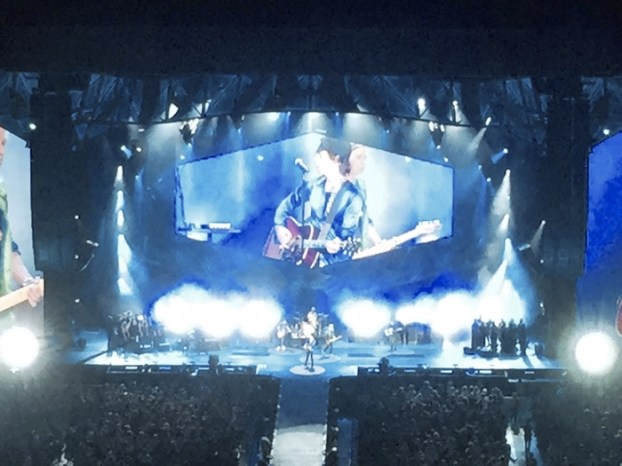 Ivy Overcash is in the choir at the lower right in this photo. The Rowan County native is part of the Emory University Choir, which backed up the Rolling Stones on their hit, 'You Can't Always Get What You Want' during the band's recent concert in Atlanta, Ga. Submitted photo

She got satisfaction: China Grove native sings backup for the Rolling Stones

Rolling with the Stones Ivy Overcash has a story to tell at dinner parties for years to come.

On Tuesday night, she was part of an Emory University choir that sang backup for The Rolling Stones at their concert in Atlanta.

“It was indescribable,” Ivy, 25, said Thursday morning. “We got off the stage and said, ‘What did we just do? What just happened?’”

Some two dozen members of the Emory University Concert Choir joined Mick Jagger and Keith Richards, both 71, along with Charlie Watts, 74, and Ronnie Wood, 68, on stage for their first encore, “You Can’t Always Get What You Want.”

The Emory students received box seats for the show at Bobby Dodd Stadium on the Georgia Tech campus, but had to wait backstage for the last four songs at the end of the show.

“It was an intense moment,” Ivy said. “When the lights came down and the choir came out, the audience knew which song was about to start. They went crazy!”

Ivy’s director, Dr. Eric Nelson, was notified several months ago about the choir’s participation in the concert. No one involved could talk about the gig until after the fact. Wherever the Rolling Stones perform, the band invites local choirs to join them for the iconic number.

“Everybody was just shocked,” Ivy said. “Even if you don’t listen to the Rolling Stones, you know it’s a big deal.”

“The music program at Emory is small but mighty,” she noted.

The group rehearsed once before school was out, and then got together for an informal rehearsal on Sunday. On Tuesday, they spent several hours rehearsing at the stadium.

“We did go on stage with the band and did a brief sound check with them,” Ivy said. “They greeted us and were very friendly. They shook hands with Dr. Nelson and our other conductor. It was really surreal to be in that intimate moment. It was a really professional atmosphere. We were part of the crew and we were told not to ask for autographs. It was incredible how much energy they have. They seemed vibrant and full of life.”

In the crowd of 55,000 that night were Ivy’s parents, Davey and Ketti Overcash of China Grove.

“I was just super excited for her and for the choir,” Ketti said Thursday afternoon. “That song was a very prominent part of her 16th birthday.”

It seems that young Ivy had gone to get her driver’s license that fateful day — and failed the test. She was mortified, her mom remembers, but a set of Rolling Stones concert tickets saved the day.

“It was just like some kind of karma with that song coming around again,” Ketti said. “She’s had so many opportunities at Emory. I’m just really proud of her and what she’s doing there.”

“It was just a wonderful experience,” Davey said Thursday afternoon. “We are proud parents.”

Davey said he was especially impressed with the show’s timing, choreography and visual effects. “It was unreal.”

Ivy is a 2007 graduate of South Rowan High School and a 2011 graduate of Appalachian State University with a degree in music education. She has completed the first year of a two-year master’s program in choral conducting. This fall, she’ll apply for doctoral programs, and hopes to continue conducting studies in the fall of 2016.

Before the concert, Ivy and her parents spotted each other with binoculars, and waved back and forth. Otherwise, they didn’t get to see each other until the next morning.

“When the lights went down and the choir came out, it was just the most thrilling thing to know she was up there with a band we have loved for so long,” her mom said. “It was a thrill and an honor to be there that night.”

Ketti has been a Stones fan since the mid-1980s when she saw them in Charlotte — before her daughter was born. Ivy grew up listening to the band.

Although “Beast of Burden” is Ivy’s favorite Rolling Stones song, the song she sang on Tuesday night with them has moved up in her personal rankings.