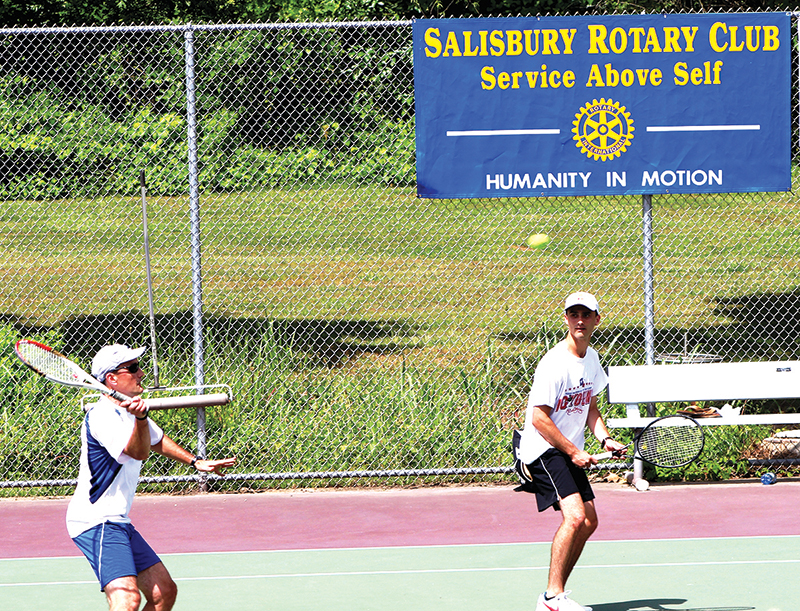 SUBMITTED PHOTO Ames and Austin Flynn were one of three pairs of father-son combos. They advanced to the finals of Men’s Open Doubles.

It’s not the French Open or Wimbledon but the recent Salisbury Rotary Tournament served up the atmosphere of a grand slam tournament for players and spectators. The annual fundraiser included 14 events and 80 players in junior, adult and senior divisions for singles, doubles and mixed doubles.

The event featured former high school state champions as well as newcomers. Many came from around the county but some traveled from Greensboro and Charlotte.  It was great, competitive tennis but, at times, it might have looked and felt like a family reunion.  The field was packed with husbands and wives, sons and daughters, siblings and cousins. Even an uncle with his great niece played together because they love the game, support the cause and want to share special memories on and off the court.

“The match was very tough,” said Storey, who played No. 1 singles and doubles for the Hornets this year. “He had a good serve and hit the ball deep so it was hard to be aggressive.”

After losing the first set, Storey changed his game plan.

“I tried to keep the rally balls deep and cross court,” he said. “I didn’t want to give away any free points.”

His strategy worked as the 17-year old won his first men’s open title.

Storey also teamed up with his older sister Katelyn Storey, a former state doubles champion, in the Mixed Doubles event, which featured the largest field among the different groups this year. The brother-sister combo advanced to the finals before losing 6-1, 6-1 to winning cousins Hannah Lebowitz and Aaron Post.

It was the first time either team had paired up together to play in a tournament.

“I had an amazing time playing with my sister,” said Storey. “She’s a great partner and is a lot of fun. We were very relaxed and having a blast. It was an experience I will remember for a long time.”

Winners Lebowitz and Post are no strangers to tennis. Lebowitz played for Salisbury High and won numerous state team titles and state individual and doubles championships.

Post, the winner of the 2014 Men’s Open Title, is also a former champion at Salisbury High and standout at Appalachian State. The relatives are part of the family tennis legacy as the grandchildren of the late Eddie and Rose Post.

“I have always enjoyed the Rotary Tournament,” said Lebowitz.  “…Over the years, I have played in the tournament with my mom, brother, boyfriend and now cousin, and that has made this tournament a really special experience for me.”

In other results, Karasik and Evan Sutker (from Charlotte) took the Men’s Open Doubles final 6-3, 6-2 over the father-son team of Ames and Austin Flynn. Despite the loss, the Flynns enjoyed all the matches.

“We love sports, especially tennis,” Ames said. “Austin and I know each other’s game so we can anticipate what the other will do and position on the court.”

The Flynn men were not the only family members participating in the tourney. Anna Flynn, who played on Salisbury High’s state champion tennis teams, played mixed doubles with her brother.  Their mother Jennifer competed in the Women’s Senior Doubles division. Both agreed it was a great experience.

“Playing with anyone in my family is fun,” said Anna. “My brother really knows my game including my strengths and weaknesses, so he can help and give me actual advice during a match.”

Jennifer offered some friendly advice for other families who play together.

“The challenge is being patient with one another on the court,” she said. “We tend to leave the court and move on to other things though, without letting any tennis frustrations or bragging rights linger.”

For many families, especially married couples, it could be a dangerous venture to be on the same side of the net together with racquets in hand. That was not the case for the husband-wife team of Dr. Chip and Kari Comadoll, who have been married for nearly 28 years. The couple served up great tennis in the mixed doubles competition advancing to the semi-finals.

They were not overwhelmed by younger opponents or the hot and humid conditions.

“Whether we win or not, Chip and I enjoy coming back to this event each year,” Kari said. “It’s a lot of fun with great players and a wonderful atmosphere.”

“If I changed occupations to a divorce attorney, I would highly recommend other couples playing tennis together,” he joked.

Roarke Burton won the Boys 14 Singles and Doubles event with Luke Grenoble.  Burton played for Knox Middle School but didn’t start competitive tennis until the seventh grade. He logged the longest match times including marathon battles against Ben Childress in singles and Childress/Lillie Rusher in doubles.

“Every match was long, difficult and physically demanding,” Burton said.

Proceeds from the event support Salisbury Missions of Mercy and medicines for the portable dental clinic held at Catawba College.  To view more photos and tourney details, visit www.rotarytennis.wordpress.com.