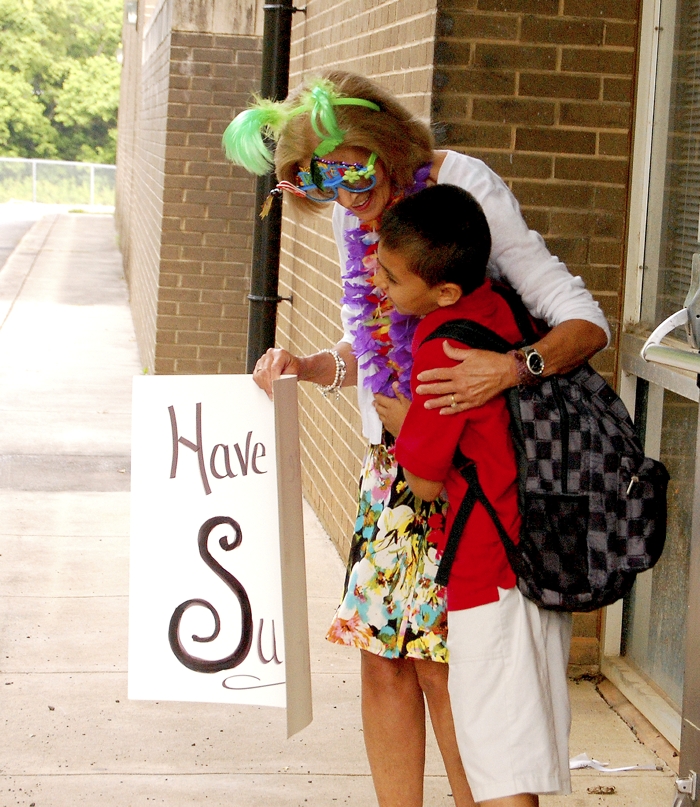 Friday was the last day of the school year for Kannapolis City Schools students, but for Fred L. Wilson Elementary teacher Ann Cline, it was her last day of school ever.

Cline has taught Exceptional Children students in Kannapolis for 43 years – 42 of those years have been at Fred L. Wilson.

Cline is known around school for her excitement and enthusiasm, especially in the morning car rider’s line.

“We dress up for every occasion,” she said, adding that she and her fellow teachers often greet the students in the mornings in holiday-themed costumes.

Providing an education for her students is important, but Cline is ultimately motivated by her love for them.

Every morning, she greets each of her students by name and tells them good morning. The children, in turn, say it back to her.

It’s not just the kids she loves, however. Cline’s room is filled with photos of her students and their families.

“I truly love the kinds. I hope I show that to them,” she said. “When the kids come up to you in the hall and give you a hug, it’s all worth it.”

Her fellow teachers and staff at Fred L. Wilson have become a second family, she added.

“This has been a wonderful faculty,” she Cline said.

Cline is the youngest of three children, all of whom went into the education field.

She started her college career at Wingate, which was a two-year college at the time, and transferred to Appalachian State University to complete her degree in education.

At the end of her junior year, Cline and her sorority sisters began volunteering at a facility for children with special needs, and that’s when Cline’s passion for special education began. Cline attended summer school to complete her degree in special education. She completed her student teaching in Lenoir before returning to Kannapolis to teach at Shady Brook Elementary School.

“This was home,” she said. “I wanted to be around my parents.”

Cline initially planned to go back to Lenoir after a year, when the teacher she taught under retired, but after a year in Kannapolis, she couldn’t bring herself to leave.

The second year, she transferred to Fred L. Wilson Elementary School, where she’s taught ever since.

“Education as a whole has changed,” Cline said.

Technology and new schools of teaching have evolved over the years.

Exceptional Children education has changed as well, she added.

Although Cline said she’ll miss her students and colleagues terribly, she’s excited to spend more time with her family.

“I want to spend more time with my grandkids,” she said.

Cline also plans to do some traveling and to volunteer extensively.

“I volunteer for hospice,” she said, adding that they’ve already asked her to volunteer more hours.

She’s also involved with the Alpha Delta Kappa teaching sorority and is on the board of the Historic Gold Hill and Mines Foundation.

She’s also already planning to come back to Fred L. Wilson to volunteer.

“I can’t just walk out the door and never come back,” she said.