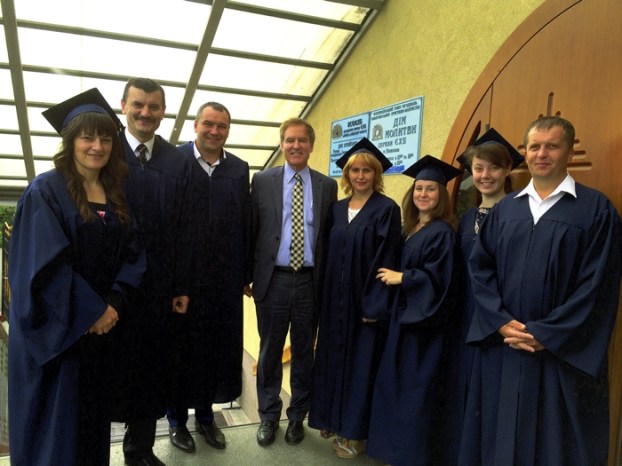 Richards with some of students who are graduating This was my fourth trip to Kiev in order to teach a course at KRBC in Vyshneve, which is located a few miles southwest of the city. Picking me up at the airport, Vitaly Shulga and his wife Helen took me on a tour of Kiev, which I had seen before, but found to be extra special this time. The view of the Dniper River from Memorial Park is splendid as are the Botanical Gardens. Everyone as usual was most gracious and accommodating. There is no place which has architectural splendor quite like Kiev.

I preached from the New Testament book, Philippians 2 in the morning worship service on 5.24 at the Church of the Gospel, which is a Ukrainian Baptist church located in Vyshneve. The service began at 10:00 A.M. and went until 12:25 P.M! It was amazing though how quickly the time went. I love their music and choir as well as individuals who recited various poems. Of course, I preached with the help of an interpreter and understood what was being sung and said through such help.

There were many students in the Church History class; they had an outline of the lectures in Ukrainaian and with the help of the interpreter, Katya Bochevar, the sessions went smoothly. The plan was to make it to the eve of the Reformation, or the late fifteenth century, but we were a little short of making it to that period. One of my students, Yuri Andrushenko had just returned from the fighting in the eastern section of the Ukraine. I heard the phrase many times that “the Ukraine is at war.” But they said that they were thankful to God the College could continue its work. They told me that prices have quadrupled, yet the average salary has remained the same or is less. In spite of their trials, I knew the privilege of being with believers who look to Christ as their hope in this world and in the life to come. It is always a spiritual blessings to be with the people at KRBC, which couples with the Church of the Gospel.

The ages of the students in the class varied. I interviewed three of the twelve graduates, and two men said they plan on being pastors and one stated that she wanted to deepen her understanding of theology and Bible in order to reach the teens of her city. At the beginning of each class, I would comment on a particular passage of scripture and remark how such a passage speaks to our current situation. They have many heart-warming customs such as standing for prayer and also prayer before the meal and prayer after the meal.

We always had tea time, Ukrainians do not drink much coffee, which the students love. Lunch was served at the conclusion of class by a group of first-class cooks. The food is always wonderful. They told me that they want to eat only organic food. I especially appreciated the buckwheat, which they serve generously, and of course the yogurt, kompot (fruit drink) and borsch are always special. Some foods one must acquire a taste, but for me this is not the case with Ukranian food. I made sure to walk at least two hours daily in order to keep the weight off.

The church’s Awana program is amazing. They had their closing session on Friday, 5.24 in the afternoon with a large turnout of children, complete with games, music and lots of food. I was introduced to one family who are not believers but are drawn by the atmosphere of the church and college. This family is one of many thousands, about 20,000-25,000 in the last two years, who have left the eastern section because of the war to find refuge in Vyshneve and other smaller suburbs of Kiev.

There were twelve students who graduated on 5.31. Each one received a beautifully laminated diploma as well as a medal which I placed on each candidate. There were six speakers including myself. By the way, an interesting custom is to have several speakers in a church service, anywhere from two to four. I asked about this and was told that it was a tradition which went back to communist days. Many times the first preacher would be taken away by state authorities, then the second one would preach with the chance he too would be taken. Next, the third speaker would commence. I never did get a clear answer about what the probability was that a fourth speaker would be needed!

It is a profound spiritual experience to be with the leadership, students and other teachers at KRBC. Continue to pray for this work of God which is a very bright light displayed by righteous living, compassion for the lost, and a vision for what God would have for Kiev and the entire Ukraine.

It seems like these days every problem gets passed around in search of someone or something to take the blame.... read more