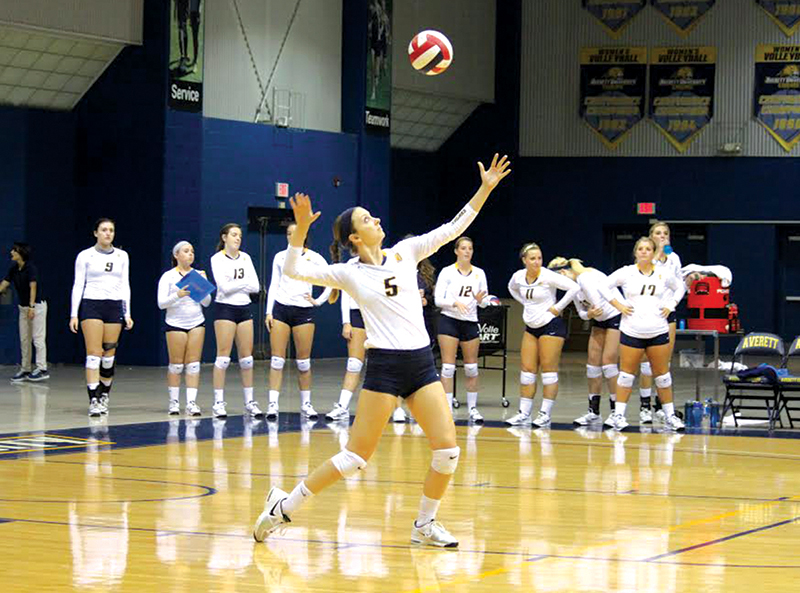 PHOTO COURTESY OF AVERETT ATHLETICS Nicole Barringer (5), a product of South Rowan, graduated from Averett University and will stay at the school as a graduate assistant for the volleyball team.

Barringer has accepted prestigious awards recently, including Female Student-Athlete of the Year for the USA South Conference and USA South Woman of the Year.

This fall she’ll be starting a coaching career as a student assistant at Averett. It’s all proof that when doors seem to be shutting, a window is opening somewhere.

Barringer, who turned 22 on Friday, made All-Rowan County teams in volleyball, basketball and softball, but when she was a senior at South Rowan in 2011, colleges weren’t beating down her door.

Her best sport was volleyball and as an athletic, 5-foot-9 setter, she could’ve held her own in Division II. But none of the partial athletic scholarship offers she received were appealing.

“Looking back at it, Averett wasn’t my top choice or even my second or third choice because they’re Division III, and I thought I could play Division II,” Barringer said. “But Averett was offering me a huge academic scholarship. It was my best option.”

She had two goals when she arrived at the school in Danville, Va. — start as a freshman and win a championship.

The transformational experience for Barringer came prior to her sophomore year when Averett coach Danny Miller named her team captain.

“I’d captained teams in high school, but that’s kind of expected when you’re a senior,” Barringer said. “But when you’re named captain as a sophomore, that’s a different feeling. Coach Miller saw leadership qualities in me before I saw them in myself. He gave me an opportunity. I tried to run with it and I really pushed myself to be a leader.”

She became a leader not just on the volleyball court but in academics and service. She was the USA South’s Student-Athlete Advisory Committee president and represented the conference at national meetings. She’s given lots of speeches in lots of places, something she’d never been comfortable doing.

“I used to tremble inside when I got up and had to speak in front of a large audience,” Barringer said with a laugh. “I still get nervous, but now I don’t sound nervous.”

On back-to-back days during the first week of June, Barringer received the Don Scalf Award as her league’s female student-athlete of the year and the USA South Woman of the Year award. Besides what she did on the court, Barringer maintained a 3.61 GPA as a criminal justice major.

“Awards like this aren’t things you ever think about or even dream about,” Barringer said. “I’m speechless and I’m humbled. I’m thankful for the support I’ve had from my family, from my professors, from my teammates and from Coach Miller. He’s held us to high standards and I’ve had a great platform at Averett not only to play a sport but to grow as a person.”

Barringer, who graduated in May, will help Miller as the graduate assistant coach this fall while she works on a master’s degree.

“I’ll be helping coach girls I’ve played with,” Barringer said. “But it won’t be awkward. I’ve been hard on them already.”

A coaching career wasn’t in her plans when she arrived at Averett, but now it’s an option.

“I know I’m going to see a whole different side of volleyball as a coach,” she said.

Four years ago, Averett was Barringer’s fourth option, but now it’s her home.

“I see so many kids from Rowan County coming here now to play different sports,” she said. “I hope they can all have as rewarding an experience as I’ve had.”