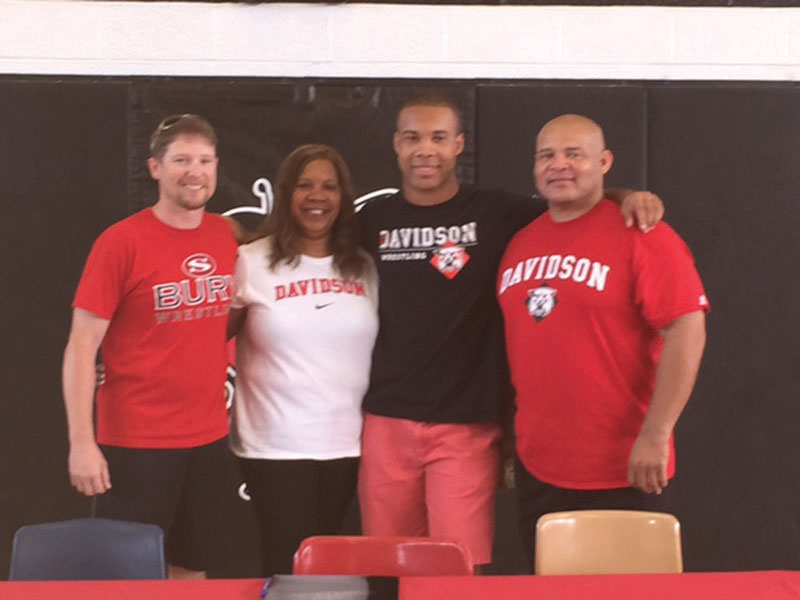 SALISBURY — Even NCHSAA wrestling referee Michael Rollins came to the signing party held in the Salisbury High gym for Jeffrey “J.C.” Burton.
That says something about how highly regarded Burton is with everyone who’s gotten to know him over the years.
Burton signed with academically prestigious Davidson and should be a standout wrestler for the Wildcats, but whatever he does in athletics will always be runner-up to getting a well-rounded education.
“That drive for education comes from both my parents (Jeff and Carmen),” Burton said. “The schools I started looking at when I was a freshman were Davidson, Wake Forest, North Carolina and Vanderbilt. To go to any of those schools, I knew I would have to focus on academics first in high school.”
Burton took the tough AP courses at Salisbury and has compiled a 4.4 GPA.
Burton will never forget the day he was accepted at Davidson after applying for early admission.
“That was a big thrill when I found out online that I’d been accepted,” Burton said. “I remember I was in my room, and I yelled so loud my parents thought something terrible was happening to me.”
While academics came first, Burton found time to be an All-Central Carolina Conference and All-Rowan County linebacker in football. He was the Hornets’ leading tackler.
He was annually a contender for wrestling championships. He qualified for the 2A state tournament three times.
He placed fifth in the state tournament as a junior at 182 pounds and had a record of 38-10.
As a senior, he was 46-5, won the Midwest Regional championship and placed third in the state tournament.
Burton said Davidson gave him a choice of football or wrestling. He had to pick one or the other as football season extends into the start of wrestling season.
“I’ll really miss football, but it wasn’t a hard decision,” Burton said. “Wrestling has been my No. 1 sport since I started wrestling in third grade.”
Salisbury coach Tim Pittman was Burton’s coach with the RoCo wrestling team when he was introduced to the sport, so he’s had a major impact on Burton’s life. So has assistant coach Shane Miller.
“Coach Pittman was there from the beginning and Coach Miller molded me,” Burton said.
Miller missed Burton’s signing because he was in Mississippi serving with the National Guard, but he was there in spirit.
Burton competed at a high level in recent weeks and is still improving. He won Southeast Regional championships at 182 in two different divisions (freestyle and Greco) in Atlanta. It was a performance that elevated him to a national junior ranking of 17th at 182.
Pittman wasn’t surprised that Burton keeps raising the bar.
“J.C. has worked harder this spring than I’ve ever seen him work,” Pittman said. “He’s been either working out or competing non-stop. He’s showed great dedication to his sport.”
Davidson has a good wrestling program and sent two grapplers to national competition last season.
Burton plans a pre-med major.
“We’re all proud of J.C.,” Pittman said. “We’re even more excited about him getting into a school like Davidson than we are that he’s going to have an opportunity to compete.”