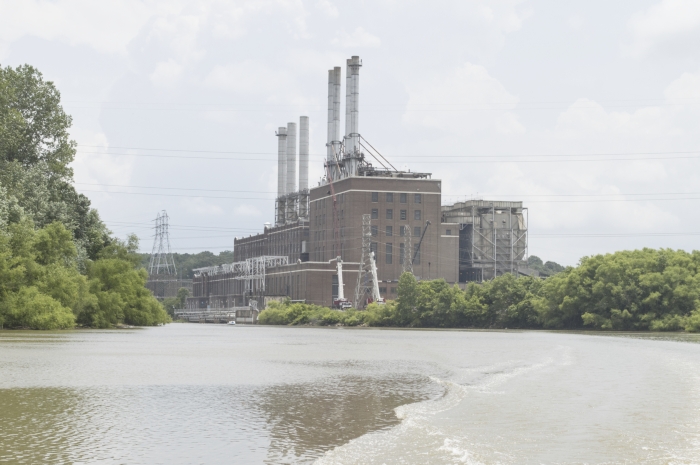 Buck Steam Station as seen from the Yadkin River in 2016. Josh Bergeron/Salisbury Post

DUKEVILLE — More Rowan residents are without clean drinking water after the North Carolina Department of Environment and Natural on Thursday released additional test results for wells near Buck Steam Station.

To date, 44 water wells in Rowan County have been declared unsafe. The greatest number of wells have tested above state standards for hexavalent chromium and vanadium — present naturally and in coal ash. Both chemicals are also toxic for human consumption at certain levels. The latest results — released in a blog post on the Department of Environment and Natural Resources’ website — included exceedances for a number other chemicals including: antimony, cobalt, lead, manganese, zinc, sulfate, iron and total dissolved solids.

Sulfate is a chemical that’s been linked by Duke Energy to coal ash contamination. The chemical was found in Buck Steam Station’s own water well.

A total of 45 results have been returned for well tests near Buck Steam Station and 100 have been identified for testing to date. It’s unclear when the remaining 55 results may be returned to local residents.

Duke Energy, defending itself, has denied responsibility for any unsafe water wells near Buck Steam Station’s coal ash pits, and claims vanadium and total chromium in nearby groundwater are naturally occurring. The company has provided U.S. Geological Survey maps of both chemicals that show increased levels across the Piedmont. Hexavalent chromium is a subspecies and the more toxic form of total chromium, but Duke Energy spokesperson Erin Culbert said the chemical may also be naturally occurring.

The company says a groundwater study at its Buck facility — scheduled for completion this fall — would determine if Duke is responsible. Duke Energy has also said the test results meet federal water standards, which means the water could be piped through a municipal water system.

Environmentalists and residents say it’s likely Duke is responsible for condemned wells because of the company’s decades-old practice of dumping coal ash into man-made pits within eyesight of nearby homes.

Yadkin Riverkeeper Will Scott said it’s reckless and irresponsible to think naturally occurring amounts of the chemicals rule out the possibility of contamination coming from Buck Steam Station.

“Duke still can’t produce any stronger evidence to support its position than a couple of highly generalized and outdated statewide maps,” Scott said.

After reviewing Rowan’s test results, Dr. Lisa Bradley, a toxicologist and member of the National Coal Council who has previously done work for Duke Energy, said she’d be willing to drink the well water near Buck Steam Station, specifically citing state standards for the two most common chemicals.

“I think that the state, in coming up with both their hexavalent chromium and vanadium numbers have been very conservative,” Bradley said.

She said all of the constituents of coal are present at some level in nature.

“Everything that’s in coal ash was in the original coal,” Bradley said. “Coal was basically created from swampy areas where all the plants died, were buried and there’s a huge geologic pressure that over millions of years crushed it to become coal.”

Although it denies responsibility for well contamination, Duke provides water on a recurring basis to families near Buck Steam Station. Mooresville company Niagara Bottling has also provided water to residents.