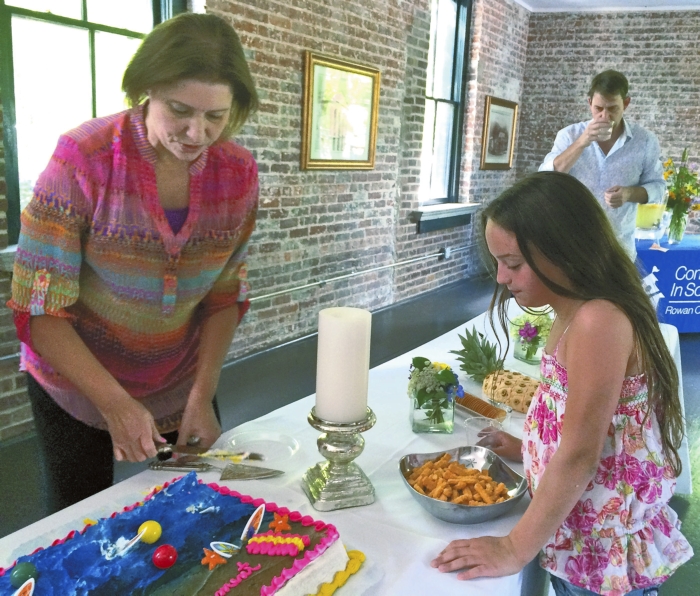 Vicky Slusser, retiring executive director of Communities in Schools of Rowan, cuts a piece of cake for granddaughter Madalinn Griffin at a reception held in Slusser's honor. Photo by Jeanie Groh/Salisbury Post

Cheers erupted as Vicky Slusser arrived at a surprise party Thursday evening at the Heritage Room in downtown Salisbury. Cheers gave way to applause and applause gave way to the strains of “For she’s a jolly good fellow.”

After 18 years of serving as executive director of Communities in Schools of Rowan County, Slusser will retire at the end of the month.

“Nobody has ever earned retirement any better,” said Communities in Schools Board Chair Ron Turbyfill. “She has put more into this program than we could ever compensate her for.”

Turbyfill went on to talk about all the tangible ways Slusser has helped the children of Rowan County.

Slusser held back tears as she walked around, hugging current and past Communities in School board members and staff.

“I am overwhelmed,” she said.

“I’m not going away,” Slusser said. “I’ll just be getting more sleep, hopefully.”

Slusser said she’s looking forward to spending more time with her family after her retirement.

“My husband and I are going to travel,” she added.

In 1998, after her husband retired from the Army, Slusser and her family moved to Rowan County for her to take the executive director position. Not only is she responsible for running Communities in Schools of Rowan County, but she’s also the program’s primary fundraiser and grant writer.

Since Slusser came to Rowan County 18 years ago, she’s run a top-notch program.

“She’s been around long enough that she knows everything,” said Wanda Huntly, Overton site coordinator.

Robin Hendrick has been Communities in Schools of Rowan County’s volunteer coordinator for the past three years, and works closely with Slusser.

“She’s so easy to work for,” Hendrick said. “She cares about us.”

Turbyfill announced a new scholarship honoring Slusser at the party.

Over the past six weeks, Communities in Schools board members and staff have worked to raise funds for the scholarship, which will offer funds for one or two Rowan County students each year.

The main requirement is that applicants write an essay detailing how Communities in Schools helped them make it to graduation.

“This is not a one year thing,” Turbyfill said, adding that they’ve raised funds for several years worth of scholarships.

Applications for the scholarship in Slusser’s honor will be accepted through the end of the month.