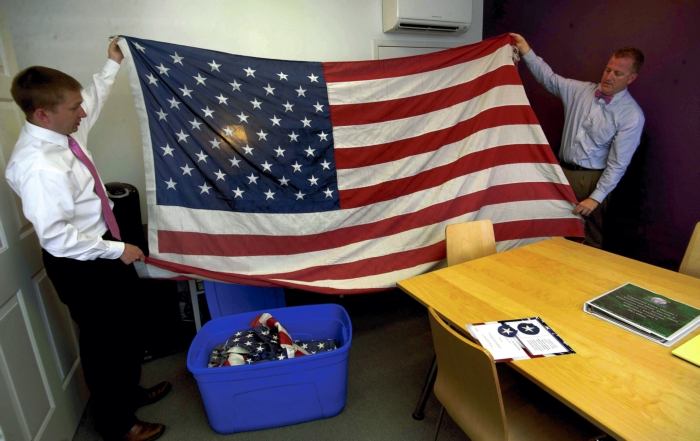 JON C. LAKEY / SALISBURY POST Carolina Cremation receives many worn and tattered American flags from several drop off barrels located in the Salisbury area. Will Staton, left, and Russ Roakes fold up a large flag that was dropped off in one of the collection bins. American flags, when retired from service, are supposed to be destroyed by burning.

SALISBURY — The U.S. flags stored inside the plastic container were like neatly folded dungarees, faded from years of wear and washings. Will Staton pulled out the flag on top.

“This is one of the larger ones we have,” Staton said.

Staton grasped one end, and Russ Roakes held the other, and as they unfurled the flag, Roakes kept stepping closer to the far wall. Sitting nearby, Matt Staton guessed the faded Stars and Stripes measured 6 feet by 10 feet.

The flag had once flown outside a local fire station and had been deposited in one of several receptacles the Statons’ Carolina Cremation provides to accept used flags, before retiring them with one more patriotic duty.

They are draped over the bodies of U.S. veterans before they are cremated.

Will Staton says it’s always a special moment for the company, and later a veteran’s family members, when they receive one of the stars cut from the same flag that was burned with their loved one.

The star swatch is attached to the certificate of cremation. It is presented to the family with the cremains, and it can be emotional, seeing that lone white star with a faded patch of blue behind it.

This service Carolina Cremation provides accomplishes two things. First, it’s a fitting farewell to a military veteran. Second, it disposes of a U.S. flag in the way the U.S. Flag Code intends — “a dignified way, preferably by burning.”

Since 2012, when Carolina Cremation and Powles Funeral Home began its participation in this “Retire Your Flag with Honor” program, several hundred local veterans have been cremated with donated U.S. flags draped over them.

Roakes, a funeral director with Powles, says more than 1,000 used U.S. flags in all sizes and condition have been contributed so far.

With Flag Day coming up Sunday and July Fourth around the bend, it seems like a good time to remind people that the “Retire Your Flag” receptacles are available. You can feel comfortable that your worn flag will be disposed of properly, with the added bonus of knowing it will be used to honor a veteran one last time.

The June 14 date for Flag Day goes back to June 14, 1777, when the Continental Congress first approved the design of a national flag. In 1916, President Woodrow Wilson issued a presidential proclamation establishing a national Flag Day on June 14, though a few states and localities had been holding a birthday celebration for the flag since as early as 1885.

But it wasn’t until 1949, during President Harry S. Truman’s time in office, that June 14 as Flag Day became law, and it also required the president to issue a Flag Day proclamation every year.

Receptacles for the U.S. flags are located in Salisbury at Uncle Buck’s Pub & Grub, Made Man Barber & Shave, Stallings Memorial Baptist Church and Carolina Cremation at 650 Industrial Ave. Powles Funeral Home in Rockwell also has a receptacle, as will the Faith Soda Shop in the near future.

“And, obviously, if anyone else is interested, we are happy to talk,” Roakes said.

After its current renovations are complete, Powles Funeral Home hopes to install a drive-up box into which people can deposit used flags without getting out of their cars.

Uncle Buck’s on South Main Street in Salisbury was the first place to offer a flag receptacle, and it by far has been the most popular place for dropoffs, Roakes said. The restaurant has a custom-made deposit box.

Donated flags have come from individuals and veterans groups such as honor guards and VFWs. The flags have been as big as the fire department’s version, or as small as hand-held flags. Every so often, the receptacles have flags from the various military branches, which also are burned with a veteran.

But in all cases of a veteran’s cremation, a U.S. flag is draped over the body, unless a family would request that it not be. That’s never happened. Also, the star swatch given to the family is from the flag burned with the veteran. The company does not keep a supply of pre-cut stars around to attach to the cremation certificates.

“The meaning for the family would not be there,” Matt Staton said.

At times, families will request several stars from the flag as special keepsakes for various members of the clan.

Roakes has been surprised that none of the used flags to date have included a note, giving background on where the flag was flown or who made the contribution. If any notes are attached in the future, Roakes said, it might be information worth sharing with the families of veterans who are cremated.

Carolina Cremation stores all the donated flags at its facility off Industrial Avenue. So far, the company has not had a request to cremate a veteran with a particular flag.

Will Staton said a few times, when the cremains have been delivered, a veteran’s family will make the gesture of giving Carolina Cremation a replacement flag.

Of all the used flags donated, Roakes said, none have pre-dated 1960 and had only 48 stars in the blue field.