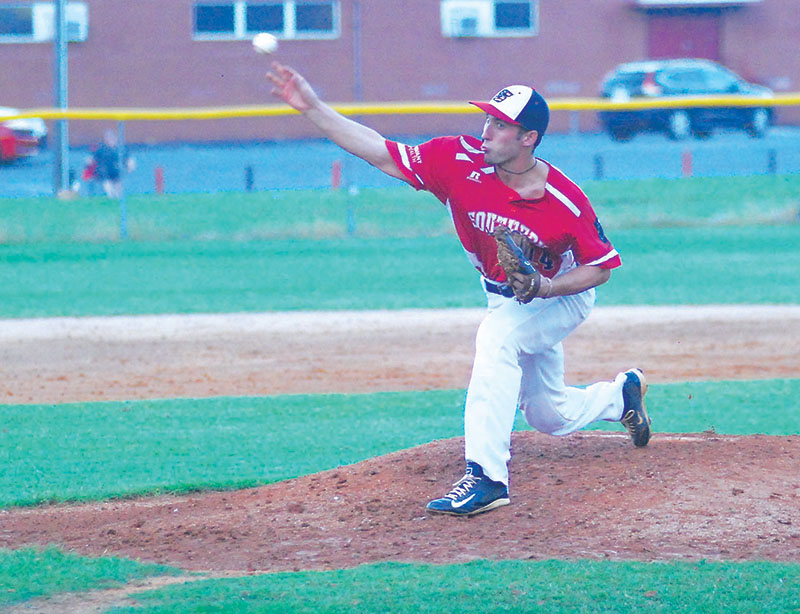 LANDIS — Dillon Atwell graduated with Carson’s class of 2014, while Owen White won’t graduate until 2018. So they were never high school teammates.

They did team up to win an American Legion baseball game Wednesday, leading Southern Rowan to an easy 7-1 victory against visiting Concord.

Concord was shorthanded due to graduation activities and wasn’t able to muster any offense against Atwell. A wily veteran and a two-time Rowan County Pitcher of the Year, Atwell tossed seven breezy shutout innings and didn’t walk a batter.

“We got what we get from Atwell every time — a solid outing and a chance to win,” Southern Rowan coach Ben Hampton said.

Atwell made his American Legion debut in the summer of 2011 — when White, who started for Southern Rowan last summer as an eighth-grader, was just 11 years old.

Atwell struggled in the first inning of his recent start against Winston-Salem, but he was back on track against Concord (1-10, 1-4).

“I made a few corrections and got off to a lot better start,” Atwell said. “The defense helped me. We were good defensively.”

White had four of Southern Rowan’s 10 hits, including a homer that rocketed over the left-field fence in a hurry when he led off the third inning. White, who has been clocked at 91 mph on the mound this summer, also anchored Southern Rowan’s defense at shortstop.

“That home run Owen hit — just awesome,” said Atwell. “He put a stroke on that. You can’t square it up any better.”

White hammered four balls hard, although one would’ve been caught in left field had the sun not been beaming in the face of the left fielder in the first inning. White came to the plate in the bottom of the eighth with a chance at at a 5-for-5 night but popped up.

“I got excited, got anxious and popped up a curveball,” White said.

Southern Rowan (8-5, 3-1) scored twice in the first inning with Chandler Corriher crossing the plate on White’s hit. White scored when Bo Corriher, batting with the bases loaded, became the first of six Southern batters to be plunked by a pitch.

White’s solo homer gave Atwell a 3-0 lead to work with.

“I hit a homer off that same pitcher earlier in the season,” White said. “I was just seeing the ball right out of his hand tonight, and I leveled out that swing. We gave Dillon a little cushion and he was pitching great.”

Two errors handed Southern Rowan a run in the seventh for a 6-0 lead. Matt Honeycutt singled home Stowe for a 7-0 lead in the eighth.

“We didn’t swing the bats as well as we need to, but we did manufacture some runs,” Hampton said. “We’re just trying to go one step at a time. Now we’ve got a big game Thursday before we take a break.”