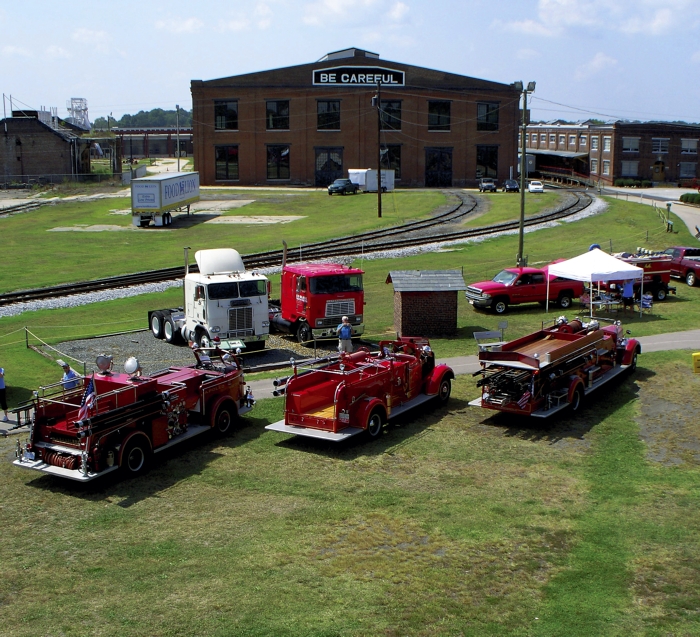 SPENCER — The North Carolina Transportation Museum will put out all the stops — along with a host of fire trucks and turn-out gear — on Saturday. See antique and classic fire trucks dating back to the early 1900s through the late 20th century, turn -out gear used by modern day firefighters, and other emergency response equipment and activities. Regular museum admission applies for exhibits and the on-site train ride. The Transportation Museum is located at 411 S. Salisbury Ave. in Spencer. For details, call 704-636-2889 or visit www.nctrans.org

The 20th Annual Juneteenth celebration is Saturday at Kelsey Park on Old Wilkesboro Road. The fun-filled family day kicksg off at 10 a.m. with local vendors and at 1 p.m., the celebration will officially start with the Apollo talent show for children, teens and adults. There is no charge to perform and a cash prize will be awarded to each category winner. At 5 p.m., the gospel program, emceed by the Doctor of Comedy Cindy Mae-, features local talent. Children’s games, blood pressure checks and football games will be a few of the activities during the day.

Woofstock is a festival of music, dogs, and demonstrations on Sunday, June 14 from 1 to 5 p.m. Entry to the festival is free. It will be held at 315 Martin Luther King Jr. Ave. (near the Civic Center). There will be live entertainment and music. Proceeds go directly to City of Salisbury’s first dog park. Call 704-216-PLAY or visit www.salisburync.gov/Play for more information. Hosted by SPRD in partnership with Dog PAWS taskforce.

Knocking on the door of ‘A Doll’s House’

Sunday, June 14 at 2 p.m.: An introduction to Ibsen’s timeless play by Dr. Bethany Sinnott that will enrich your understanding of the classic play and the controversy it caused with its commentary on marriage and cultural norms in the 19th century. Held at Center for Faith & the Arts. 207 W. Harrison St.; parking and entrance behind Haven Lutheran Church. For more information visit www.faithart.org/events/60-knocking-on-the-door-of-a-doll-s-house

Get ready for H.O.T. : History on Tap

This fun, new event series will take place exclusively during the H.O.T. summer months of June, July and August, where Historic Salisbury Foundation invites the public to cool off by sampling fresh brews while exploring Rowan County’s historic places and spaces. Enjoy a special insider tour and the opportunity to meet new people or a chance to catch up with friends. H.O.T. takes place from 5:30-7:30  p.m. on • June 25: History of The Empire Hotel, with special tour and craft beer pairing • July 23: History of Cars, NC Transportation Museum, with craft beer pairing • Aug. 27: History of The Meroney Theater, with insider tour and wine pairing • RSVP prior to the event on Historic Salisbury Foundation’s Facebook page

Salisbury hosts Movies in the Park

Divided by Four at Nashville Nights

KANNAPOLIS — Held from 3:30 to 9 p.m. on Saturday, this family fun event is free to the public and brings out thousands of show cars and spectators. It is held at the corner of West Avenue and and First Street downtown. The Cruise-In is held second Saturdays from  March through November. Visit http://downtownkannapolis.org/ for more details.

Too Much  Sylvia next Thursday in Concord

CONCORD — Union Street Live hosts its monthly summer concert and block party on June 18. The free concert is on Means Avenue and the Block Party and  outdoor dining and games are on Union Street. The June concert features Too Much Sylvia at 6 p.m. on the Main stage and The Kodiak Brotherhood on the North stage at 7  p.m.  Music and party last until 9 p.m.

CONCORD —  The Carolina Renaissance Festival, a combination of outdoor theater, circus, arts and crafts fair, jousting tournament and feast, will hold open auditions on Saturday, June 20 from 9 a.m. to noon and Saturday, June 27 from from 9 a.m. to noon at the Cannon School located at 5801 Poplar Tent Road. Available opportunities include roles for street performers, role players, musicians, and variety acts. Amateur and professional opportunities are available. Prepared material, head shots, and resumes are appreciated but not required. Auditionees should be age 13 or older. Contact 704-896-5555 or email vreanie@renfestinfo.com to schedule an audition appointment or visit Carolina.RenFestInfo.com

CHARLOTTE —  Charlotte Folk Society’s June 12 Gathering at 7:30 p.m. features The Barefoot Movement, a band of young musicians that was named Momentum Band of the Year in Raleigh last October by the International Bluegrass Music Association. Opening at 7 p.m. is the old-time/bluegrass band The Hashbrown Belly Boys. These concerts are family-friendly and free (donations are appreciated) and held at the Great Aunt Stella Center, 926 Elizabeth Ave. Visit www.folksociety.org for more information.

NORTH WILKESBORO — The fifth season of the outdoor drama “Otto Wood: The Bandit” opens on June 25 at The Record Park at the corner of Fourth and E streets in North Wilkesboro. Nat Padgett returns for the fifth year to play the role of Wood, a Depression-era bandit, known for car thefts, moonshining, womanizing and numerous jail breaks — all this with one hand and a disabled leg. Wood was killed in a shootout with Salisbury police in 1930. For the fifth season, Heather Dean directs the show, with has won multiple awards from the N.C. Society of Historians. Live music by Crabgrass will be performed before the show and between scenes. Show dates for “Otto Wood: The Bandit” are: Thursday, Friday and Saturday, June 25, 26, 27; Wednesday, Thursday and Friday, July 1, 2, 3; and Thursday, Friday and Saturday, June 9, 10, 11. Tickets are $8. Call The Record at 336-667-0134 for more information.

RALEIGH — The N.C. Museum of History in Raleigh is accepting entries for the second annual Longleaf Film Festival to be held on May 13-14, 2016. Submit your film entries online now through Tuesday, March 1, 2016, at LongleafFilmFestival.com. Enter your film by the early-bird deadline on Thursday, Oct. 1, 2015, and save. More entry details and festival information are available at the website or on Facebook at www.facebook.com/LongleafFilmFestival. All submissions will be eligible for the $500 Judges’ Choice award, and all films made in North Carolina are eligible for the $500 Made-in-NC award. Each film entered in the middle and high school student category is eligible for the $500 Best Student-Made Film. Additional prizes will be awarded in the festival’s five main categories: