Thanks to books, learning won’t halt with the end of the school year 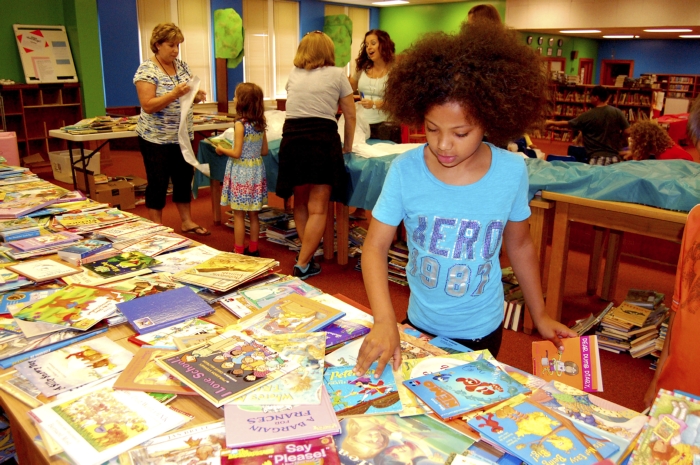 Tuesday marked the last day of school until August for Rowan-Salisbury students.

An air of excitement and anticipation filled the halls of the district’s 35 schools Tuesday as students cleaned out lockers, attended award ceremonies, held parties and participated in fun activities. It was also a bittersweet day, as students and teachers said their goodbyes.

Even though those students won’t darken the doors of their classrooms again for two and a half months, district leaders hope learning won’t stop over the summer.

In line with the district’s renewed focus on literacy, every single Rowan-Salisbury student went home with at least one age appropriate book to read over summer break.

“We did Give 5 Read 5 in the elementary,” said Director of Instructional Programs Kelly Feimster.

Read 5 Give 5 statewide initiative seeks to collect and then send home five gently used or new books with each North Carolina elementary school student over the summer.

“This is something they get to keep,” said Beverly Litke, the school’s media specialist. “They were excited. They were overjoyed.”

Litke said she overheard one student say, “Do I get to keep this book forever and ever?”

“A lot of these kids do not have books in their house,” she said. “My goal is to get the books out there.”

The students were allowed to choose five books, but after an initial pass through, there were still more books to give away.

“I didn’t want to pack them up,” Litke said, so she gave her students the chance to pick out even more books.

“Some of our kids got a lot of books today,” she said.

Sawyer Bassinger, a second grader, said his summer plans include going to the beach and reading his new books.

“I watch both of these TV shows and movies,” he said when he described how he picked out his selections.

“I picked my books by looking at books I’ve wanted but never had enough money to get,” said his brother, fifth grader Ayden Bassinger.

Fifth grader Tyrion Reavis said he picked books he felt he could learn from and that would prepare him for middle school, as he pointed to a book about science.

Haleigh Chapman, also a fifth grader at China Grove Elementary, said she picked books that were related to other books she enjoyed.

“Books can take you places,” she said, adding that reading can be an adventure.

Middle and high school students weren’t left out of the reading excitement.

They were able to choose a novel that was provided through donations to the Impact Summer Reading Fund.

There were nonfiction books, fiction books and even graphic novels, Feimster said. “We tried to have a variety so that something would appeal to everyone.”

Statistically, she said, students who don’t read at home lose ground academically over the summer.

“We don’t want them to slip into the summer slide,” Feimster said.

“Lots of research says that if students have a choice to read what they like, they’ll read more,” she added, saying that it doesn’t matter what students read, as long as they’re reading.

Over the course of the summer, each middle and high school is planning book swaps where students can come, talk about what they read and exchange books so they get to read something different.

Feimster said she hopes the book swaps will “keep them excited” about reading over the summer.