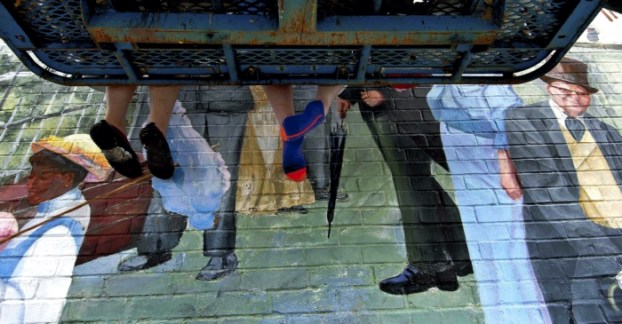 JON C. LAKEY / SALISBURY POST Cynvia Arthur-Rankin and Diane Monday's feet dangle below the lift they were sitting in as they make repairs to the historic mural Crossroad : Past into Present. The mural, which was dedicated in 1980, gets updated by every five years as paint fades and cracks. Tuesday, June 9, 2015, in Salisbury, N.C.

Mural makeover: Original artist says, ‘If I could hug it, I would’

SALISBURY — The legs of artists Cynvia Arthur-Rankin and Diane Monday dangled from their painting platform as though they were girls hanging out in their favorite treehouse.

As they gave fresh colors to one of Salisbury’s treasures — the West Fisher Street mural next to the Wells Fargo bank — the women listened to a book on tape and dealt with the inevitable interruptions of people stopping by, craning their necks and telling them how much they appreciated the mural and their work.

“Looking good,” one man said Tuesday on his way into the bank.

“You did all this?” another guy asked the artists. “You all do beautiful work.”

Traveling from their homes in Maryland, Arthur-Rankin and Monday arrived in Salisbury on Memorial Day and worked tirelessly on the mural since then, often putting in 12-hour days. After retouching many of the 141 people in the mural and some features such as the yellow trolley car and a fountain gate, they are packing up and going back home today.

They hope they can return in late September or early October and rejuvenate the mural even more.

Leaving today is like saying goodbye to an old friend. Arthur-Rankin was the mural’s original artist in 1980 and its constant nurturer since.

Since “Crossroads: Past into Present,” was dedicated Nov. 30, 1980, Arthur-Rankin has returned every five to eight years to perform as much restoration work or adding of people to the giant street-scape scene as time and available funding would allow. Monday, a fellow artist and friend, started making the trips with her in 2001 or 2002 — they can’t remember exactly — and both women appreciate the many people who have told them how much they love the mural.

Visitors constantly offered to take them to lunch or dinner as a way to express their appreciation for the mural.

“We thank everyone who took the time to say ‘Thank you,'” Arthur-Rankin said.

Something the women heard time after time from folks who stopped and talked was how the mural is the first place they bring their out-of-town guests. Again, they enjoyed hearing that.

Janie Allen heads The Mural Preservation Inc., the nonprofit group which tries to maintain the copyrighted mural. She said it takes about $12,000 to pay for each trip the artists make. The artists paid for their own lodging, but they were compensated for their time and expenses such as paint, scaffolding and brushes.

“We have a start on our fall money,” Allen said, but she acknowledged how challenging it is to maintain a mural this old and this big — one of the largest murals in the country.

One way to raise money in the past for its upkeep was to add local people to the mural, but the artists and Allen think it has reached its people limit.

If Arthur-Rankin and Monday are able to return this fall, they will continue to refurbish the mural’s people, buildings and streets. Some of the original people in the mural have not been retouched in 35 years.

Most of the original characters were members of the Rowan Art Guild, the organization which sponsored the mural in 1980.

What the artists really would like to tackle — and something they said would help give the mural more of a three-dimensional feel — is the sky, which has faded badly in recent years. “I would love to redo this sky,” Arthur-Rankin said, looking upward.

The mural measures 127 feet wide and 48.4 feet tall. It depicts Salisbury at the turn of the 20th century, and most of the local people in the mural are dressed in period costumes.

A sidewalk sign along West Fisher Street gives some of the mural’s history, and it also identifies all the people in the mural.

The visiting artists woke up most days about 5 a.m., and were at the mural by 6 a.m, trying to get a head start on the heat. Most days proved to be perfect for painting, Monday said, because they were overcast and not rainy. They generally concentrated on areas from the bank toward the middle and back toward the bank again.

The women said they were not good company at night because at day’s end they were nasty, dirty and tired. Their evening routine, Monday added, was “shower, eat something, go to bed.”

The artists said they were looking forward to returning home and seeing their husbands after their extended time away. Monday is retired, though she now paints full-time. Arthur-Rankin said Monday excels at portraits and has been teaching her some of the finer points.

Arthur-Rankin works four days a week for her attorney husband but tries to devote Fridays to painting.

As usual, Arthur-Rankin and Monday enjoyed their Salisbury stay, and they were impressed with things happening in the town.

If you would like to make a donation toward the mural’s upkeep, send your contribution to The Mural Preservation Inc., 204 E. Innes St., Salisbury, NC 28144-5190