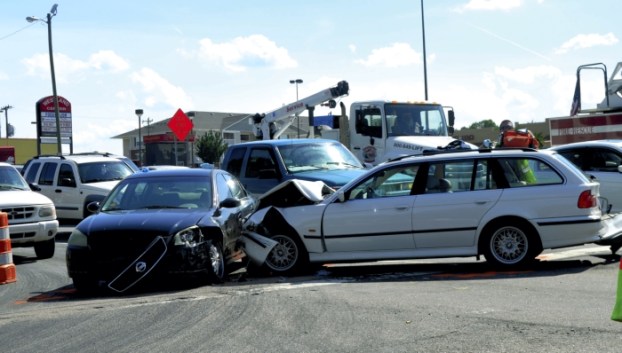 The driver of this white BMW told police his brakes failed sending him into the path of traffic Tuesday at the intersection of West Jake Alexander Boulevard and Mooresville Road. A total of four vehicles were involved in the crash including this Nissan, shown here. Shavonne Walker / Salisbury Post Salisbury Police and fire personnel responded on Tuesday to this three vehicle accident, two other vehicles involved not shown, at the intersection of West Jake Alexander Boulevard and Mooresville Road, located at the corner of Pizza Hut. At least two people were taken to the hospital for treatment. Shavonne Walker/Salisbury Post

Taylor said he got into the far right lane when he realized the brakes weren’t working in order to not rear end anyone, but found himself traveling through the intersection.

The Hyundai, driven by Judith Massey, 62, of Cleveland, was traveling beside the pickup in the other lane. Massey was not injured and able to drive her car from the scene, the officer said.

The BMW rolled into a Nissan driven by Turdell Jones, 35, of Salisbury, who was sitting at the light preparing to continue on Jake Alexander Boulevard toward the Hurley Family YMCA. He was not injured and was seen walking around following the accident.

Officer Benjamin said it’s not clear if the brakes did in fact fail because tests done at the scene were inconclusive. The BMW’s engine was not operating so the officer could not check the power brakes and the extent of damage to the vehicle also prevented him from verifying if the brakes weren’t working properly.

The officer said tests done in a body shop should be able to confirm any brake issues. No charges were filed.

Jones told a Post reporter he wasn’t sure what happened because “all of a sudden I looked up and there were two cars heading towards me.”

Carolyn Mumford, who was driving a school bus, was a witness to the accident and told the Post she was traveling on Mooresville Road and was waiting to turn onto Jake Alexander Boulevard.

Mumford said she saw the BMW “flying through the intersection.”

The N.C. State Veterans Home-Salisbury was awarded last week a deficiency-free rating by the state of North Carolina. The Veterans... read more