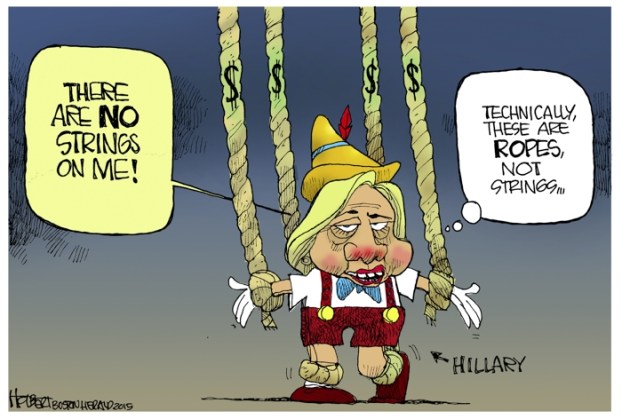 PAWLEYS ISLAND, S.C. — If Hillary Clinton becomes the first woman president, she’ll have to do it with the votes of fellow females, particularly younger white women.

When Clinton ran against Barack Obama for the Democratic nomination in 2008, both were trying to make history: he as the first nonwhite president, she as the first nonmale. Only one could succeed, and a key reason behind Obama’s triumph was his appeal to younger voters, including women.

“The younger woman voter didn’t feel a sense of obligation to vote for the first ‘one of their own,’ but instead felt more passion for Obama’s message of hope and his vision for the future,” writes Democratic strategist Penny Lee in U.S. News and World Report.

How Clinton hopes to enhance that “sense of obligation” was clearly visible during a recent campaign stop here in South Carolina. Speaking to a group of Democratic loyalists in Columbia, she emphasized that women still make 78 cents on the dollar compared to men. Her message was sharp: Gender still matters. Discrimination still exists. Pay attention to your own self-interest.

“I don’t think I’m letting you in on a secret when I say that too many women earn less than men on the job, and women of color even less,” she said. “All this lost money adds up.”

She ticked off a series of proposals to remedy that imbalance, such as a higher minimum wage for the lowest-paying jobs, which are often held by women. Noting that Republicans generally oppose those changes, she asked acidly: “What century are they living in?”

That’s a telling dig from a woman who is often derided by Republicans as a relic from the last century. She cannot deny her age, or the fact that she occupied the White House in the 1990s.

So she is trying to use the persistent problem of gender inequality to look forward, not back. To inject energy and purpose into a campaign that risks feeling tepid and tired. To remind women that the historical mission she started seven years ago remains unfinished.

There’s nothing new about the gender gap in American politics, and Democratic dependence on female voters. Obama trailed Mitt Romney by 7 points among men but ran up an 11-point advantage with women.

Obama’s margin, however, was built entirely on nonwhite votes. He lost white women to Romney by 14 points. And since Clinton cannot hope to duplicate the enthusiasm Obama generated in communities of color, reducing that deficit with white females is critical to her chances.

The Wall Street Journal recently analyzed polling data from 2014 in attempt to identify the most important swing voters for 2016. Their conclusion: “The ability to win over single white women will be key” to the outcome.

GOP pollster Bill McInturff told the Journal that any Republican nominee who wants to win next year would have to build a lead among white women of at least 9 or 10 points. But in the latest Journal poll, Clinton actually runs ahead of leading Republican contenders with this vital demographic.

Clinton’s no shoe-in, of course, and recent polls have also revealed some serious vulnerabilities. The Washington Post/ABC survey pegs her favorable rating at 45 percent — her lowest in seven years. Only 4 in 10 voters call her honest and trustworthy.

But women are 17 points more likely than men to express confidence in her reliability, and that’s partly because Clinton’s potential appeal to women goes beyond her public record. One of the most important qualities in any candidate is empathy: a candidate’s ability to convince voters she understands “the problems of people like you.”

On that question, Clinton is holding her own at 49 percent in the ABC/Post poll. By contrast, only 35 percent feel Jeb Bush understands them.

She’s learned from her husband the importance of talking about family, relating real-life experiences, and using stories to connect with voters on a personal, nonpartisan level. That’s why the most important surrogate for her campaign won’t be her husband, Bill. It will be someone who cannot even talk: her new granddaughter, Charlotte.

“Senator,” “secretary of state,” even “first lady” — they’re all political titles. “Grandmother” is personal and universal. It’s a title that conveys both warmth and wisdom. And it transcends politics.

So yes, issues like income inequality could help convince younger white women to back Clinton. But urging them to elect Charlotte’s grandmother as the first female president might be an even more compelling message.

Y ou’ve heard the speeches many times. The high school years end and another chapter of life begins. That’s why... read more