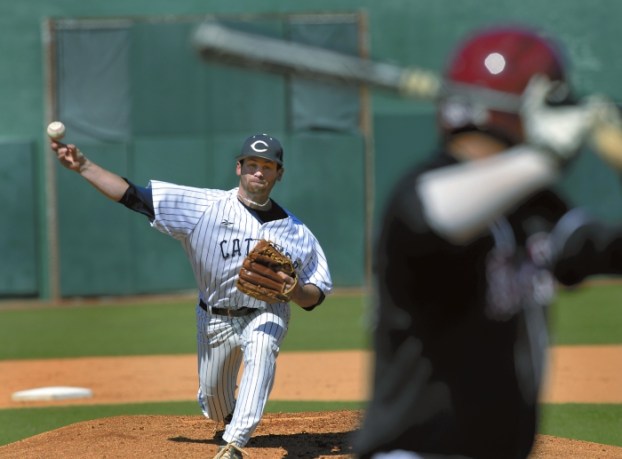 Wayne Hinshaw/for the Salisbury Post/file photo In a file photo from March 7, Catawba pitcher Craig Brooks hurls a pitch to the plate as a Lenoir-Rhyne batter stands in. Brooks was selected on Tuesday in the seventh round of the Major League Baseball draft by the Chicago Cubs.

Catawba College graduate Craig Brooks is a staunch Atlanta Braves fan — or at least he was.

Brooks believed there was a great chance the Braves would draft him on Tuesday when rounds three through 10 of the annual MLB draft were conducted.
If not the Braves, who had expressed the most pre-draft interest in Brooks, he was expecting it to be the Chicago White Sox. They had been next in line as far as showing Brooks pre-draft love.
But curveballs are part of baseball, and it was the Chicago Cubs who picked Brooks in the seventh round on Tuesday. He was the 203rd pick overall and is the first Catawba player ever drafted by the Cubs.
“The Braves were the team that followed Brooks the most, but the Cubs were around some too,” Catawba coach Jim Gantt said. “It didn’t shock me that it was the Cubs.”
Brooks was picked quite high for an NCAA Division II guy, even for a DII player who was a consensus first-team All-American and received a long list of accolades such as Division II Player of the Year, MVP and Pitcher of the Year.
Brooks is the highest draft pick for Catawba since Brian Boltz was taken in the second round, 57th overall, by Atlanta in 1989. Brooks is only the fourth Catawba player in history to be drafted in the first 10 rounds.
“I’m happy he was taken that high, and it’s important,” Gantt said. “It could make a big difference for him as far as opportunities down the road that he was a seventh-rounder and not a 37th-rounder. Some people with the Cubs really like him or they wouldn’t have taken him that high.”
Brooks earned it. He was a fabulous all-round athlete for Catawba, serving as the every day third baseman his senior season in addition to taking his regular starts on the mound. That had to wear him down some, but the 5-foot-10, 180-pound competitor always wanted to be in the lineup and he was Catawba’s best defender at the hot corner — and one of the team’s five best hitters.
He was the closer at the end as Catawba made a historic postseason run that included a Southeast Regional championship and a national runner-up finish to Tampa in the Division II Championships in Cary.
Brooks closed all three games that Catawba won in Cary. He faced 17 batters in the tournament and struck out 11 while allowing one hit and one walk.
Brooks was 9-1 as a senior and was 23-4 in his college career with 12 saves and a 1.94 ERA. He led DII in strikeouts as a senior with 158 in 99 innings. That’s 14.4 strikeouts per nine innings.
Brooks regularly threw 93-94 mph as a starter and was clocked at 97 mph during a relief stint.
While he has four pitches — fastball, curve, cutter, change up — Brooks’ future is virtually certain to be as a relief pitcher.
There may be a negotiating process ahead before Brooks becomes a Cub, although he has made no contract demands other than “he wants to be treated fairly.”
The recommended “slot” value for the pick at which Brooks was taken by the Cubs is $211,300, although it’s certain that the Cubs will be looking to sign not only Brooks, but the other senior pitchers they drafted in rounds 6-9, well below their slot values, as those players have limited negotiating leverage.
The Cubs’ top picks were college players with eligibility remaining or high schoolers and they are likely to have to pay over slot value to get those players signed.
That does not mean the Cubs are good guys or bad guys. That’s just how the baseball draft game is played these days.
In the small-world category, the Cubs picked TCU senior right-hander Preston Morrison in the eighth round. He is from Cuthbertson High in Waxhaw and was an American Legion teammate of Brooks.