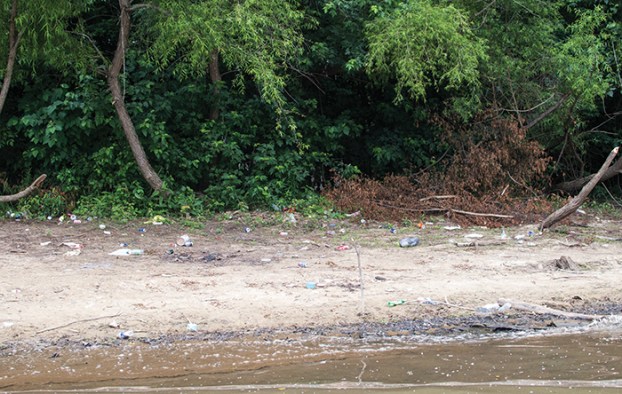 Josh Bergeron / Salisbury Post - Trash litters a strand of shore along the Yadkin River. Trash has been especially present in areas where fisherman can walk to, according to Rena Long, who lives on the river and spend time picking up the trash.

Trash continues to litter shores of the Yadkin Josh Bergeron / Salisbury Post – Gregory Tano, right, Rena Long, middle, and Scarlett Tano, left, ride down the Yadkin River on Monday. All three have spent time cleaning up trash that’s piled up on the banks of the Yadkin.

For some, it’s a source of municipal water, and for others it’s a place for leisurely recreation, but the shore of the Yadkin River is also peppered with pounds of trash.

The waste littering the Yadkin’s shores ranges from plastic bottles to refrigerator doors. The waste is most visible close to Interstate 85 and areas that allow for walking access to the river’s shore, according to Rowan County resident Gregory Tano.

Tano and his wife Scarlett live along the Yadkin, just off of Leonard Road. The problem isn’t new. For years, various groups have organized cleanups along the Yadkin River and High Rock Lake.

Even with the clean-up events, the litter persists. Trash is known to float down the river, often piling up at the High Rock Lake dam. In severe cases, the trash juts out from the dam for several hundred feet.

“The river is a beautiful place, and I’d like it to stay that way,” Gregory Tano said.

He owns a pontoon boat and frequently loads it up with trash when boating along the river.

His sister Rena Long, who lives up the Yadkin, is similarly upset about the plentiful pollution. Like Tano, Long, who kayaks the river, often fills her boat up with debris when on leisurely rides. With a small kayak and endless debris, Long has become discouraged.

“I’ve slowed down because I know it’s just a drop in the bucket,” she said. “I’m not sure whether people really don’t know or whether they don’t care.”

Long has names for particular parts of the river. There a spot she half-jokingly calls “the island that trash built” and another she calls the “Yadkin shopping mall.” At the “Yadkin shopping mall,” Long said, it’s easy to find basketballs and other things commonly found on an average trip to the store. She’s seen a refrigerator door, orange construction barrels and old TV in the river.

She said in one case the shore looked like it was covered in green jewels. In fact, the “jewels” were plastic bottles, she said.

Long and Gregory Tano said some of the trash may float from the Winston-Salem area into the Rowan and Davidson portion of the river, but the pieces of debris are so numerous that it’s hard to believe local fishermen aren’t contributing to the problem.

While traveling north on the Yadkin from the Buck Steam Station, trash becomes increasingly visible on the river’s shores near areas close to I-85.

“You don’t have to go into the woods to find the garbage. It’s just sitting out on the shore in plain sight,” Gregory Tano said.

In one case, fishermen brought a trash bag to the river, hung it in a tree and filled it with empty bait boxes and beer cans, then didn’t take the trash bag with them.

“Knowing that it’s a really nice, important waterway, it could be pristine, but it’s not,” he said.

By David Purtell david.purtell@salisburypost.com Some windows in the house at 127 E. Horah street are covered with plywood. The windows that aren’t... read more