The buzz about the basswood tree 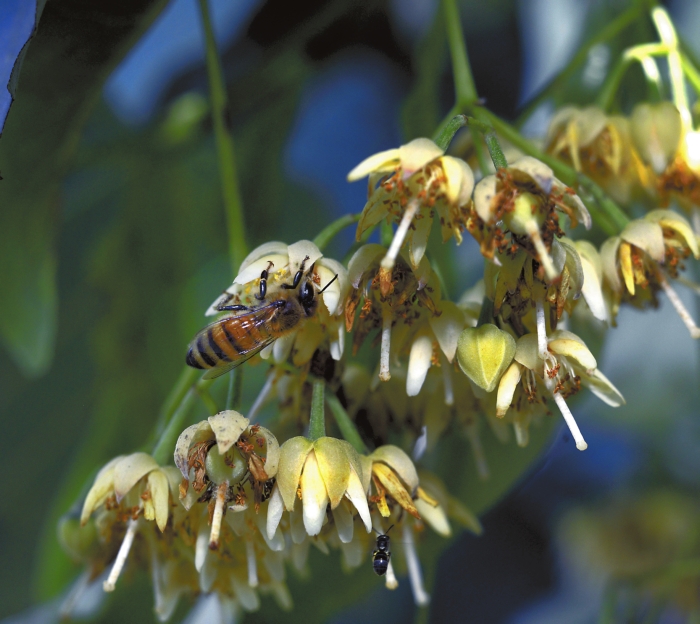 A honeybee at work. The yellowish flowers of the linden/basswood tree grow in clusters that hang below the leaves. Honeybees, bumblebees, butterflies, and other flying insects come to the tree to gather the sweet nectar. This giant linden or basswood tree sits behind Organ Lutheran Church between the sanctuary and the education building. It is in full bloom with its sweet smelling flowers that attract thousands of bees. photo by Wayne Hinshaw, for the Salisbury Post

It was a day of buzzes. 80-year-old Andy Brown, who is a Rowan County beekeeper and member of Organ Lutheran Church, gave me a buzz on the telephone to tell me about the linden basswood tree located between the sanctuary and the education building at Organ Church.

After Brown told me about the tree, a story idea started buzzing in my head. I got excited with the real buzz about the basswood tree.

Approaching the giant tree loaded with yellowish white flowers growing in clusters, I could hear the buzz of the bees at work. There were honeybees, bumblebees, mason bees, butterflies, lightning bugs, and everything flying to the tree to suck the sweet pollen from the blooms. I know the bees could smell the sweet perfume odor in the air for miles. Bees can travel 5 miles or so looking for sweet nectar to take back to their beehives.

“Ain’t that something. Like being in a beehive,” exclaimed Brown, who had the buzz himself. He was excited. “This is the best tree in the U.S. for woodcarving, too. Ben Brown planted this tree in 1960 when the sanctuary was built.”

Brown continued that he has a basswood tree of his own at his home not far in back of the church. “My tree is four years old and hasn’t bloomed yet. This tree usually blooms about Father’s Day, but it is early this year because it has been so dry.”

“When these bees fill up, they will fly back to my hives on the other side of the woods to unload and come back again,” Brown said. “People in the Concord bee clubs came up here to see, and they about died. That’s something. There must be a million bees.”

According to my research, the trees are mentioned in ancient Greek and Roman mythology, calling them lime trees. The trees were considered to be trees of life and health. The flowers can be used to make herbal remedies for cold, coughs, fever, infections, for high blood pressure, headaches, muscle spasms, for the digestive tract and as a diuretic. I don’t prescribe this remedy at all, but historically it has been used to “treat what ails you.”

I have never heard of anyone eating the basswood leaves in a salad, but the new tender, early springtime leaves are supposed to have a sweet taste in a salad. They reportedly get bitter with age. A tea can be made from the flowers, and the flower buds can be eaten raw or cooked.

The basswood tree is the softest wood in the hardwood family. It is not a great firewood. The wood is great for woodcarving since it is white in color with a very fine, almost non-existent grain. The Vikings made shields from the wood. Early Germans used it for sculptures and altar pieces. It can be used in making electric guitars and wind instruments like recorders. It has good acoustic traits.

On this Saturday afternoon, Brown, realizing the time, said, “I’ve got to get home. I’m going to the YMCA tonight to dance. I go every month.”

Brown has the buzz for dancing. He dances all kinds of dances. After watching him buzz around with the bees, I expect he will do some high stepping when he dances.