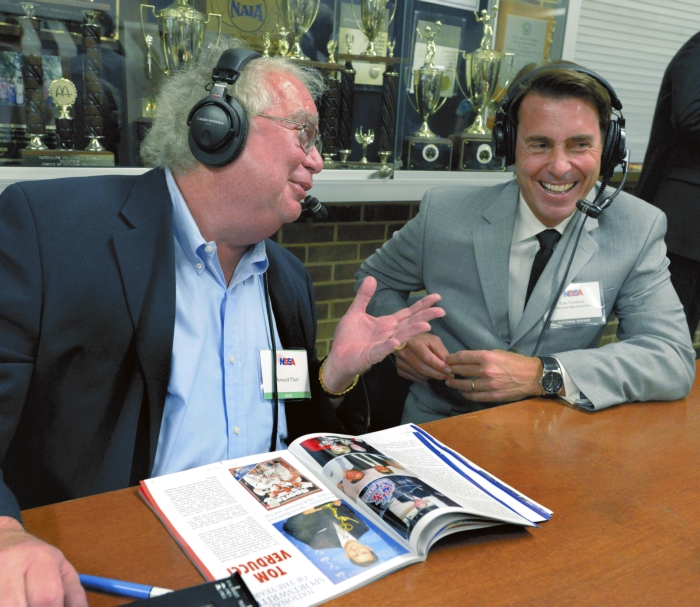 SALISBURY — If Sports Illustrated baseball writer Tom Verducci had his way, you wouldn’t be reading this.

The National Sportswriter of the Year would much rather tell a story than be one.

“I know, I know,” he said with boyish enthusiasm Monday night at Catawba College’s Goodman Gym, moments before the annual NSSA banquet. “I’m much more comfortable asking the questions than giving the answers. It’s something you have to get used to.”

So is enjoying Verducci’s colorful, insightful prose for SI and SI.com — and his thought-provoking television commentary for Fox Sports and the MLB network. The 54-year-old New Jersey native is the fifth straight Sports Illustrated writer to win the national award.

“This came out of the blue,” he admitted. “And it blew me away. This means the best-of-the-best and your peers have voted on it. Even though I do a lot of broadcasting now, writing is still near and dear to my heart. Winning this award is humbling and exciting, but also very important to me, this business of writing. Writing sports is all I ever thought about growing up.”

Verducci grew up with ink on his hands, delivering the Newark Star-Ledger as a pre-teen. Before starting his route, he’d routinely read the entire sports section. “I always watched the games on television,” he said. “But I wanted to know the player’s reactions. I wanted to read their quotes the next day, just to see if there was anything I missed. I wanted to know more. So even at that young age I was plugged in to journalism, even if I didn’t know what journalism was.”

Those innocent moments planted a seed in Verducci, one that has yielded a lifetime harvest. He graduated from Penn State, set out for Florida to cover the Miami Dolphins, then spent a decade at Long Island’s Newsday, where he learned to write with precision, impact and distinction from sports editor Dick Sandler.

“He was probably the most important influence on shaping my career,” Verducci said. “I really didn’t know what it took. I knew I wanted to do it, but not how to do it. So there I was, covering high school football games and out of nowhere, (Sandler) told me I’m going be covering the Yankees in 1985. It was like a week before spring training and he sent me to Fort Lauderdale. I get there and everyone’s following the Yankees because of (George) Steinbrenner. I’m competing with guys like Murray Chass and Moss Klein. That was boot-camp journalism. I was 24, but Dick Sandler had the confidence to throw a young kid into that situation.”

When SI knocked on Verducci’s door in 1993, he couldn’t say no. It’s taken him on a magical history tour of the major leagues, to All-Star games and World Series. Among his more eminent recent pieces were a profile of Derek Jeter’s perfectly scripted farewell to Yankee Stadium last September and SI’s 2014 Sportsman of the Year feature about Madison Bumgarner. He’s also crafted the art of tell-the-truth journalism, fearlessly writing about third-rail topics like Alex Rodriguez and the steroids scandal.

Along the way, Verducci has developed an alliterative style, a descriptive way of portraying language, that charms SI’s 23 million weekly readers. He understands that to get something you have to give something. “Having a great story is a great thrill,” he said. “But even a singular turn of a phrase, a slice that you use within a great story, all of that thrills me.”

People have noticed and now, so has the NSSA.

“Tom is one of those writers who bring the game to life,” gushed ESPN basketball analyst and former Duke standout Jay Bilas. “He was always a fabulous reporter, one who understands every nuance of the game. I’m a tremendous fan of his.”

Now listen to Dayton, Ohio’s Hal McCoy, one of the four newest NSSA Hall of Fame inductees: “He’s a very talented wordsmith. I’m one of those guys who read his stuff and say ‘I know all those words.’ I just can’t put them down like he does. He’s gifted.”

It’s certainly been a pleasant journey for Verducci, a master at balancing time restrictions and deadlines.

“I still kind of get anxious more than nervous when it’s time to do a story,” he explained. “At SI, you’re usually doing a feature story about a place, a person or a thing. It’s not like being a beat writer for a newspaper, where you get to another game the next day. This is a one-time event — and you better nail it. The pressure at SI, it’s everything you do has to be of the highest quality. I kind of like that pressure.”

It’s something Tom Verducci did better than any sportswriter last year — whether he wants to talk about it or not.