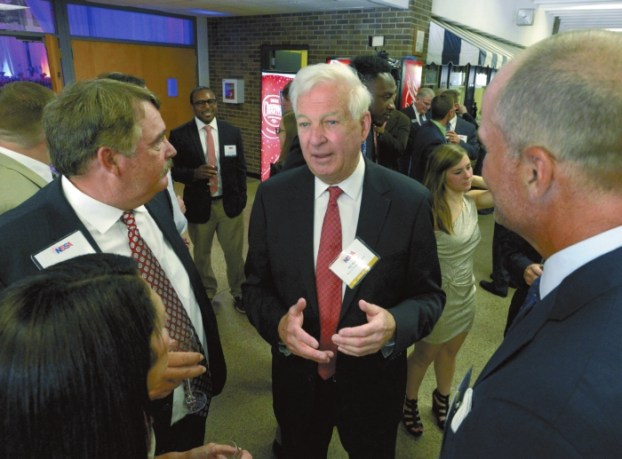 NSSA Hall of Fame inductee Bill Raftery, center, talks with Dave Bilas, left, and Jay Bilas at a past gathering. Raftery, a college basketball sportscaster famous for his “send it in” line on dunks, was inducted into the Hall of Fame along with Leslie Visser, Dick Schaap and Hal McCoy.

SALISBURY — White-haired Bill Raftery is tall, his 6-foot-4 height hinting that the newly inducted NSSA Hall of Famer was a better athlete than most of his fellow sportscasters and sportswriters.

“Oh, my playing days aren’t important,” Raftery said.
But they sort of are. His basketball background helps explain how he became a successful coach. In turn, his coaching success transitioned smoothly to his stellar broadcasting career.
During the 1958-59 season, Raftery scored 827 points as a senior at St. Cecilia’s High School in Kearny, N.J., and broke Tom Heinsohn’s career state scoring record with 2,191 points.
Raftery would hold that record into the 1990s, and he also was one of the top New Jersey school boys in baseball and soccer.
Lots of schools recruited Raftery. He chose La Salle.
“Well, it was close, Philly’s Big 5 was huge, and coach Dudey Moore had a reputation,” Raftery said.
Playing on the La Salle freshman team in 1960, Raftery averaged 26 points and 25 rebounds. By the time he was a sophomore, his combination of grace and grit earned comparisons to La Salle all-time great Tom Gola.
“I was one of about 500 guys billed as the next Gola,” Raftery said. “No one was.”
Raftery averaged a team-leading 17.8 points as a sophomore. But he hurt his back twice as a junior — crashing into the stands once, and taking a blow from an opponent’s knee once. He missed all but four games and was in such pain he had to sleep on the floor rather than a bed.
He returned as a senior co-captain and led La Salle’s charge to the NIT.
The New York Knicks drafted 15 players prior to the 1963-64 season — Duke’s Art Heyman was first; Raftery was pick No. 14.
He competed in the Knicks’ camp at New York Military Academy. He played well but was one of the last cuts.
“The coach was Eddie Donovan and his scout/assistant was Red Holzman,” Raftery said. “I had my dreams shattered by two guys who became my close friends. Sometimes life works out like that.”
He had a history degree and landed on his feet.
“I got back from camp and got a call from Fairleigh Dickinson,” Raftery said.
He coached basketball and golf at the New Jersey school. He went 63-47 in hoops. The opportunity to move up to Seton Hall came in 1970.
He coached Seton Hall 11 seasons, went 154-141, and took the Pirates to three NITs.
“And then I got really lucky,” said Raftery, a master of self-deprecation.
He’d often thought he would like to try broadcasting after basketball, but the move came earlier than he imagined and came after one of Seton Hall’s best seasons.
It was 1979. That’s the year both ESPN and the Big East Conference were born. ESPN’s “Big Monday,” featuring the new conference, changed the landscape of college basketball on TV.
“Dave Gavitt (first commissioner of the Big East) called me and wanted me on the broadcasts for Big East games,” Raftery said. “He called on October 28 and said he needed an answer by October 30. I told him yes. My first TV game was Providence at Seton Hall. Seton Hall won it late and Dan Callandrillo (a player Raftery recruited) ran by and kissed me right on the air.”
A star was born.
Raftery has filled the broadcast air with “Rafisms” ever since. Bank shots are made “with a kiss.” The rim is “the tin” and touch fouls are “nickel-dimers.” Defenders need to move “their puppies” to get in position. Dunks are made by “big fellas” and they often “send it in — with authority!”

One of his first, well-known calls was “Send it in, Jerome!” when Pittsburgh’s Jerome Lane had a fast-break dunk that shattered the backboard.
Clinching shots were “daggers” for Raftery, and they were made by clutch guys who possess “onions.”
“Onions just kind of popped out one night when Kevin Edwards made a big shot for the Nets,” Raftery explained. “None of those things were pre-conceived. They just happened.”
When Siena’s Ronald Moore beat Ohio State in the 2009 NCAA tournament with back-to-back 3-pointers, Raftery blurted out “Onions! Double Order!” in one of his more famous calls.
A Raftery trademark became his shout of “Man to man!” shortly after the opening tip of each broadcast.
“I was just trying to say something quickly and get out of the way of the play-by-play man,” Raftery said. “I had no idea I was saying it like that until people started yelling ‘man-to-man’ at me in airports.”
He formed a partnership for countless years with Verne Lundquist.
“We went together like old shoes,” Raftery said. “Comfortable.”
For decades, Raftery was a familiar — and welcomed — voice during March Madness. He was both entertaining and informed due to hours of meticulous preparation. He saw games through a coach’s eyes.
After all those years on NCAA tournament radio, Raftery joined Jim Nantz and Grant Hill for his first televised Final Four in April. It was an unexpected moment in the spotlight for a wordsmith in his 70s.
“My first thought was maybe they had a left-over blazer that would fit me,” Raftery said. “But I’d worked with Jim on his very first basketball broadcast back in 1986, so it was a thrill.”
Raftery, who has four children and five grandchildren, is already a member of several halls of fame, but he graciously accepted the NSSA’s highest honor on Monday.
“Maybe they’re just running out of people to put in,” he said with a smile.