Food in the news: Blueberries should be great 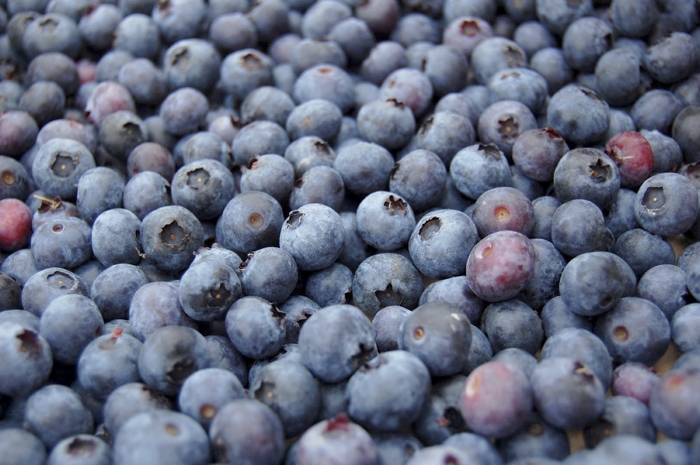 This should be a good season for blueberries in North Carolina.

Blueberry growers across North Carolina are expecting a record crop as they start harvesting for the season, thanks to recent dry weather.

“Too much rain at harvest can damage blueberries and ruin a crop,” said Agriculture Commissioner Steve Troxler. “Fortunately, the weather is cooperating and we are seeing some of the highest yields and best-tasting berries we’ve had in years.”

North Carolina is the seventh-largest producer of blueberries in the nation. In 2012, the state grew 41 million pounds of blueberries. About 75 percent of the state’s crop is sold to fresh markets such as grocery stores, farmers markets and roadside stands.

Bill Cline, a plant pathologist at the Horticultural Crops Research Station in Castle Hayne, works with blueberry growers throughout the year. He said consumers should have no trouble finding N.C. blueberries during the next few weeks. Shoppers are encouraged to check labels to see if blueberries were grown in North Carolina, but Cline said that even national brands should be using N.C. blueberries right now because of availability.

One of the best ways for consumers to know they are getting locally grown blueberries is to buy berries directly from growers at farmers markets, roadside stands or pick-your-own farms. Many of these growers expect to have crops that last until Labor Day. The N.C. Department of Agriculture and Consumer Services offers an online directory of farmers markets, roadside stands and pick-your-own farms at www.ncfarmfresh.com.

Here’s a blueberry recipe that uses the other big ingredient of the day:

The Produce Box, a company that delivers local farm produce and artisan foods to member doorsteps each week, is introducing a direct delivery service to allow residents statewide to join The Produce Box http://www.theproducebox.com.

Through the direct delivery service, residents across the state including Hickory, Jacksonville, Fayetteville, Salisbury, Greenville, Gastonia, Goldsboro, Wilson, Lumberton, Lake Norman can have local, fresh foods and produce delivered via overnight shipping to their homes and businesses.

This is not associated with Salisbury’s Bread Riot or the Salisbury-Rowan Farmers Market.

Members have no contracts or long-term commitments and can choose from a wide variety of produce options and North Carolina specialty foods each week. Box prices range from $25 to $35 and include the direct delivery fee.

The Produce Box works with more than 50 North Carolina farmers and 90 local artisans to purchase more than 2 million pounds of local produce each year. Of the produce purchased, the company donates 700 pounds each week to community organizations across the state.