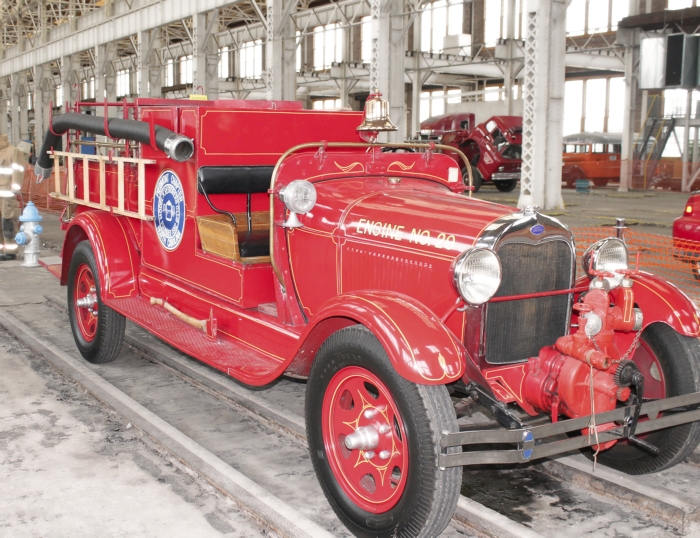 A 1929 Model A fire truck at the N.C. Transportation Museum in Spencer

The N.C. Transportation Museum will host more than a dozen firefighting groups, showing off fire trucks and rescue vehicles during the museum’s Fire Truck Show Saturday. Firefighting apparatus will cover the museum’s Barber Junction field, while visitors can also enjoy the museum’s Back Shop Fire Trucks exhibit. Extra displays from the attending departments and a museum full of transportation history will round out the day.

Last February, the N.C. Transportation Museum opened the Back Shop Fire Trucks display, featuring the museum’s collection of fire trucks from the 1910s through the 1960s. Fire trucks displayed include a 1917 Brockway, a 1922 American La France, a 1929 Ford Model AA, a 1948 Mack, a 1955 American LaFrance, and the museum’s newest addition to its fire truck collection, a 1966 Ford fire truck.  The exhibit also includes hose reels, fire hydrants and donations of turnout gear from area fire departments that are used each weekend to allow kids to learn how firefighters do their job. With a great response from visitors, a summer Fire Truck Show was planned to coincide with the exhibit.

A great turnout is expected this Saturday, with many area fire departments involved.  The cities of Salisbury, Concord and Kannapolis will be represented, along with the towns of Spencer, East Spencer, Cleveland, Granite Quarry and Faith, along with the Locke, Millers Ferry, Cold Water, Woodleaf, and Ellis Fire Departments. The Rowan Rescue Squad and the Forestry Service will also be on hand, along with the Society for the Preservation and Appreciation of Antique Motor Fire Apparatus of America with fire trucks from collectors. The city of Salisbury is also bringing the department’s Smoke House, to teach fire prevention and safety.

Votes for People’s Choice favorites will be taken throughout with awards presented at 1:30 p.m. During the day, trucks will be photographed using the museum’s historic Bob Julian Roundhouse as a backdrop. Participating departments will then join in on the 2 p.m. firetruck parade to close out the event.

Concessions will be provided by the Spencer Eastern Star, while popcorn and drinks will be available in the museum’s Gift Station.