Food Lion volunteers have a Charmin’ time at Trinity Oaks 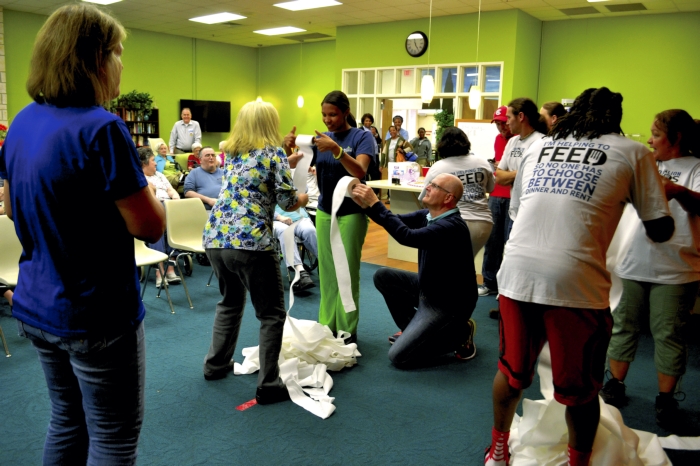 At Trinity Oaks health and rehab, residents enjoyed watching staff members competing against volunteers from the Food Lion distribution center in a rousing game of “Minute to Win It.”

Residents of Trinity Oaks health and rehab got a kick recently out of watching a team of staff members, including Executive Director Bill Johnson, compete against a team from Food Lion to see who could unroll the most toilet paper in 60 seconds.

Every month or so, volunteers from the Food Lion distribution center in Salisbury — who are called The Lion’s Roar — come to Trinity Oaks to share a fun activity with residents, whether it’s playing “Minute to Win it,” dyeing Easter eggs, or carving pumpkins.

Ashley Page has been in charge of the Community and Charitable Events committee at the Food Lion distribution center for six or seven years now. When her grandfather got sick a few years ago, Page decided that a nursing home would be a good place to focus her committee’s efforts.

She talked to Brenda Zimmerman, life enrichment coordinator at Trinity Oaks, about bringing a team of volunteers regularly, and that was the start of a beautiful partnership. This year, the Food Lion team has committed to visiting at least once a month, Page says.

“Everybody has a really good time when we go,” Page said. “Some (volunteers) are kind of skeptical at first, but after they go, everybody wants to go back again. They walk out of there laughing and smiling. It’s a good time.”

The Lion’s Roar has organized ice cream socials, an outdoor beach party, and a duck carnival at Trinity Oaks. They’ve helped serve food at a block party and handed out carnations on Mother’s Day. They’ve put together gift bags and visited on Christmas day to distribute them.

Food Lion associates raise the money for most of the programs themselves. Sometimes vendors help by donating supplies.

Page says she’s gotten a lot of joy and new friendships at Trinity Oaks. She’s also connected with a lot of the residents, many of whom call her by name when she visits now.

Scott Simpson, who works in quality assurance at the Food Lion distribution center, served as emcee for the “Minute to Win It” game.

“I just enjoy getting out and sharing with folks who can’t get out and do and go,” he said.

Simpson particularly looks forward to seeing Trinity Oaks resident Margaret Clark, whom he met during a pumpkin-carving party. The two bonded over their love of dogs. Now, when Simpson comes to Trinity Oaks he makes sure to visit Clark.

“It’s great that we have a corporate group like Food Lion that is willing to come and volunteer so faithfully,” said Trinity Oaks Executive Director Bill Johnson, who says he’s noticed that the Food Lion volunteers have developed personal relationships with the residents. “They really go above and beyond.”