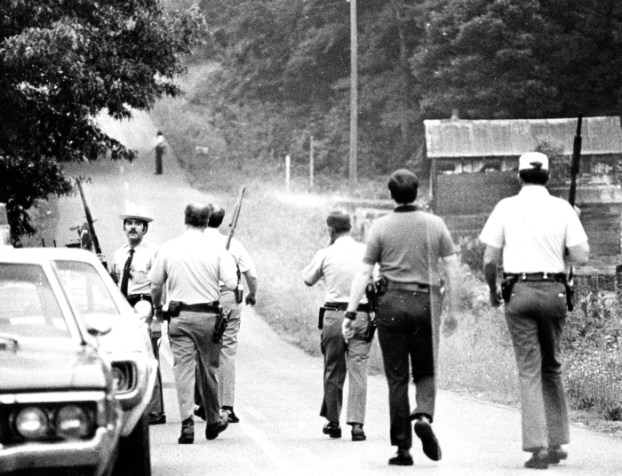 salisbury post archives Davie and Forsyth officers search for Morrey Joe Campbell after he shot and killed two deputies on Friday, May 30, 1975.

Tracking an outlaw: Davie County hunted Campbell after he killed 2 officers in 1975

Wayne Gaither had just been assigned as a plain clothes narcotics officer with the Davie County Sheriff’s Department. He had completed a two-year police science course at Forsyth Tech, hoping to become a member of the SBI.
Then, at age 29,  he was shot to death by Morrey Joe Campbell.
A native of the Sheffield community of Davie County, he was a 1964 graduate of Davie High, served in the U.S. Army in Vietnam, and worked in the private sector before joining the sheriff’s department in 1971, then for the Mocksville Police Department.
The day of his death, Gaither had gone about his business as usual, co-workers said. About 9 p.m., another officer said that calls came in that Campbell  was “raising hell.” Gaither stopped a car operated by Campbell just before 11 p.m.
“He was a good officer — good in working with narcotics,” said then Mocksville police officer R.W. Groce. “He was doing a job in this county that no one else has done.”
“There wasn’t anyone any better,” said then Mocksville Officer Gary Edwards, who worked with Gaither on narcotics cases. “He was a fine fellow to work with and would do anything you asked him to. He was well thought of throughout the department.”
“He knew what he was going,” said Deputy Steve Stanley, who also worked undercover. “He knew the law but he was quiet with it. He didn’t push anybody around.”
“He was an excellent officer,” said then Sheriff R.O. Kiger. “Wayne was dedicated to his job and liked what he was doing.”
At his funeral at New Union United Methodist Church, the Rev. Kermit Shoaf said: “We all know Wayne loved what he was doing. Wayne chose this way to show his love for his friends.”
You Might Like

By David Purtell david.purtell@salisburypost.com The Spencer Board of Aldermen will hold a public hearing on the proposed budget for fiscal... read more