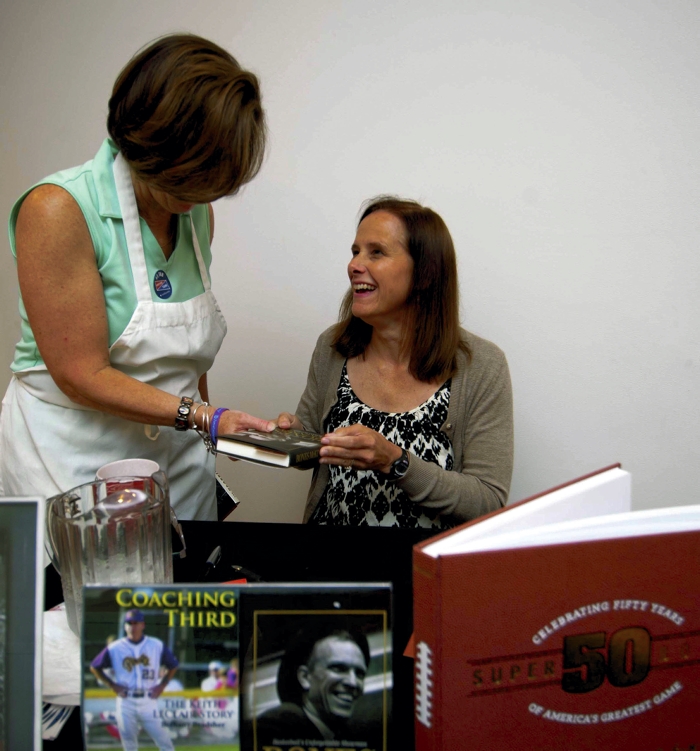 SALISBURY — Bethany Bradsher, a 46-year-old mother of four who grew up in Texas, seems an unlikely candidate to be the author of the definitive story of the Dixie Classic, a Raleigh-based holiday tournament that was the center of the North Carolina basketball universe from 1949-60.

The Dixie Classic was gone, wrecked by a point-shaving scandal, years before Bradsher was born, but she knows the Dixie Classic backwards, forwards and sideways.
Her book, “The Classic: How Everett Case and His Tournament Brought Big-Time Basketball to the South” was published on Nov. 11, 2011 — 11/11/11 an easy date for her to remember.
Bradsher was in Salisbury on Sunday as a featured writer at the National Sportscasters and Sportwriters Association’s Sports Books Signing Festival at Waterworks Center.
Bradsher went to UNC, which explains her interest in ACC basketball.
After graduation, she worked at newspapers in Monroe, Shelby and Rock Hill, with her time in Rock Hill in the mid-1990s fortuitously coinciding with the arrival of the NFL’s Carolina Panthers.
Family-raising came next. At one point, Bradsher had three children, ages 4 and under.
“My work as a journalist has been interrupted, but my timeline was a very slim thread for a few years,” she said.
She lives in Greenville, N.C. That led to her first book effort — “Coaching Third: The Keith LeClair Story.” LeClair, baseball coach of the ECU Pirates, led his program to unimagined heights before stepping down because of and later succumbing to ALS (Lou Gehrig’s disease).
“The whole Greenville community followed that story and lived it,” Bradsher said.
The LeClair book was published in 2010.
She wasn’t sure about her next project, but she knew she wanted it be a true sports story. A friend suggested the Dixie Classic.
“Family ties to the Dixie Classic were very strong,” Bradsher said. “For years, tickets to the Dixie Classic were the Christmas gift of choice for kids growing up in North Carolina. Eyes light up when you ask someone about the Dixie Classic.”
The book took her a year and half to write. There were hours of research through microfilm to get all the details right. Providing the colorful backdrop were interviews with players, assistant coaches and fans. She talked to a Dixie Classic queen and she tracked down the folks who provided the barbecue at the concession stand.
The Dixie Classic was a spectacle staged at N.C. State’s Reynolds Coliseum in the nights between Christmas and New Year’s Day. It was attended by throngs of men wearing suits and hats and women wearing Sunday dresses. The three-day format was simple: Wake Forest, Duke, UNC and N.C. State against four national teams, usually powers, in the first round, with the winners advancing.
“The Dixie Classic wasn’t on TV, and that’s part of what made it special,” Bradsher said. “There was radio, but basically if you wanted to know what happened, you had to be in the building.”
In the 12 Dixie Classics played, N.C. State won seven on its home floor. UNC won three, while Duke and Wake Forest took one apiece.
“Wake Forest finally got one in 1959,” Bradsher said. “That was the first time anyone had heard of Billy Packer, a sophomore guard with a big mouth. He was MVP.”
Outside teams never won. That led to bitter complaints that not only did the tournament and arena belong to N.C. State — so did the officials.
The first black player in the Dixie Classic was an average Seton Hall athlete named Seth Hicks in 1957.
But the 1958 Dixie Classic attracted nationwide attention because of two black All-Americans participating in a marquee tournament in the segregated South — Cincinnati’s Oscar Robertson, national player of the year, and Michigan State’s Jumpin’ Johnny Green. Louisville and Yale also were in the field for a dynamic event that featured four of the nation’s top six teams.
Green could touch the top of the backboard. When UNC beat Michigan State in three overtimes in the 1957 NCAA tournament, Green blocked seven shot attempts by UNC All-American Lenny Rosenbluth.
Unable to stay at the Sir Walter Raleigh Hotel, which usually housed Dixie Classic teams, the Michigan State and Cincinnati teams stayed at a fraternity house at N.C. State.
The games lived up to the commotion. Robertson — 29 points three straight nights — and Green were as good as advertised, but N.C. State beat Michigan State for the championship and UNC beat Cincinnati in a raucous, third-place game played with championship fire.
“Interviewing Johnny Green, he said there was a little bit of home cooking,” Bradsher said.
N.C. State coach Everett Case lost his voice, but on the court, at least, it was one of Tobacco Road’s most memorable triumphs and it came in front of sellout crowds.
“In the first six years of Dixie Classic, one of the outside teams always made the championship game,” Bradsher said. “But in those last six years, it was two North Carolina teams playing each other for the championship five times. Every school was getting better, and the intense rivalries between the North Carolina schools grew.”
It won’t be easy for Bradsher to top her Dixie Classic book, but that’s the plan.
Her third book: “Bones McKinney: Basketball’s Unforgettable Showman” was a natural spinoff from the Dixie Classic, as McKinney coached Wake Forest in the event before he became coach of the ABA’s Carolina Cougars.
Bradsher’s latest effort: “Super Bowl 50: Celebrating Fifty Years of America’s Greatest Game” is finished and is in the pre-order stage. It will be on store shelves Sept. 1.
Bradsher is excited to be in Salisbury this week because Leslie Visser is being inducted into the NSSA Hall of Fame on Monday.
“When I was coming along as a female journalist in 1990, she was the trailblazer,” Bradsher said.