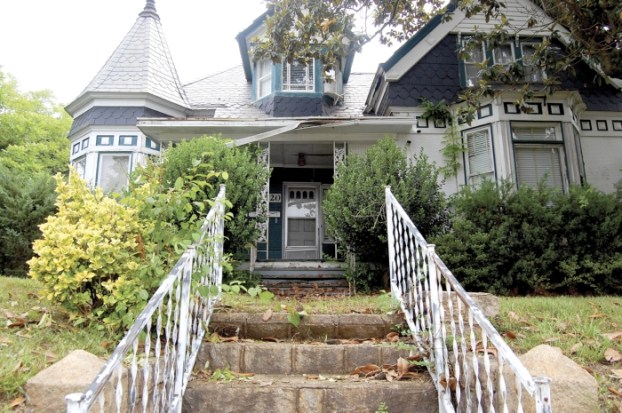 Houses like this one, old, empty and in need of repair, are a common sight across Salisbury. The city is trying to reverse the problem and find good homeowners for vacant homes. David Purtell/Salisbury Post

Salisbury’s Housing Advocacy Commission, along with staff, has updated the city’s code regarding vacant, abandoned and neglected housing, all of which are defined separately and have associated penalties:

Vacant — A residential structure on a parcel which lacks the habitual presence of human beings who have a legal right to be on the premises or at which substantially all residential occupancy has ceased.

Neglected — A vacant residential structure that has been issued one or more violations of the city nuisance and/or zoning codes within the past 12 months.

Abandoned —  A residential structure on a parcel which is (1) vacant for 30 days, (2) in violation of one or more minimum housing standards of the city code, (3) and the issues that are in violation have not been corrected within 30 days of being noticed.

A property that is determined to be vacant but is not in violation of other housing codes is not subject to any penalties, fees or fines.

The property must be brought into compliance with all minimum housing codes within 90 days. After 90 days, the city will abate all issues and bill the property owner.

The property can be occupied until all violations have been brought into compliance.

Some windows in the house at 127 E. Horah street are covered with plywood. The windows that aren’t covered are broken.

The porch is old and creaky. The yard is mostly dirt and weeds.

Peering through the broken glass reveals the inside of the house is empty except for a couple of raggedy blankets on the dusty wood floor. No furniture, no paintings on the wall, no books on the shelf below a window across the room.

The home is vacant. But worse, it’s neglected and slowly deteriorating.

There are vacant, abandoned and neglected homes across Salisbury. Some sit empty and are for sale. But many are left alone, slowly succumbing to the ravages of time — absentee owners or landlords doing little, if anything, to maintain them. Some are used to house dogs and cats; others become temporary housing for squatters; and a small number are used for illegal activity such as drug use, or worse.

The city’s proposed budget for next fiscal year includes funding for a plan to try and alleviate the problem for a small number of houses. The goal is to find new owners for vacant, neglected and abandoned houses — owners who will invest in the houses.

The city’s plan involves a couple of pathways. One way is to persuade absentee owners to donate homes to one of the city’s housing organizations, such as the Historic Salisbury Foundation or the Salisbury Housing Authority. The organizations could then find dedicated homeowners for the houses.

Another way is for the city to pursue tax-lien foreclosures on abandoned properties it has liens against. The city could then buy a foreclosed home at auction — if another bidder doesn’t take it — fix it up a bit and sell it. The proposed budget sets aside $150,000 for this effort. The money comes from the city’s fund balance.

Chris Branham was the manager of the city’s Code Enforcement Division before he left his job with the city last month for one in the private sector. The city has three code enforcement officers, currently down to two until a replacement for Branham is found, who have the tough job of dealing with property owners whose houses aren’t up to code.

Sometimes, Branham said in a interview before he left the city, it can be hard enough just tracking down the owners. Code Enforcement currently has over 100 active housing cases — everything from lawns not being mowed to houses that are simply unlivable.

Often, the city has to abate the issue, especially with unmowed lawns, because the owner refuses or can’t be found. The city pays the cost and bills the property owner. If the property owner doesn’t pay, a lien is put on the property. As a last resort, the city will demolish condemned homes.

In most cases, the city is not reimbursed by property owners after it abates an issue.

Putting homes into foreclosure can be messy too, Branham said, as several other parties, such as a bank or family heirs, might get involved.

Janet Gapen, the city’s planning director, said the pattern of vacant homes in the city forms a ring, with a radius of  a mile to a mile and a half, around downtown. The houses are found in the older, more urban, and poorer parts the city, she said.

For many properties, the original owners have died but left the house to their children or other relatives who, in many cases, don’t live in Salisbury.

“Out of sight, out of mind,” Gapen said about the problem.

The city has not done an extensive study to map and record all the empty homes, but a simple eyeball test in 2011 estimated that over 700 homes in the city did not have anyone living in them.

Not surprisingly, property taxes for many of the vacant homes aren’t being paid.

Around the corner from the house on Monroe Street are four empty houses in the 400 block of South Lee Street. One has a foreclosure notice taped to the front door and a for sale sign in the yard.

The house next to the foreclosed home is empty too and in sad shape. Two large dogs poke their head out of a window in the home next-door, one of them barking incessantly. Their names are Hokie and Baybay, and they belong to Pennie Jones and her husband.

Pennie’s house sits between two vacant homes. The owners of one, which has a small “for sale” sign taped next to the door, live in Florida, Jones said. The porch feels unstable and the paint on the side of the house is peeling. A window is open, and inside the house appears to be in decent shape. A small TV sits against the wall in an otherwise empty room.

The owner of the house on the other side of Pennie’s home doesn’t do anything with it, she said. His parents lived there before they died, she said, adding that she thinks it’s in bad shape and should be torn down.

The biggest complaint Barbara Perry said she hears from homeowners in neighborhoods around the city is the issue of abandoned and neglected homes. Perry is the chairwoman of the city’s Housing Advocacy Commission, a group of residents who work on housing issues with city staff.

The underlying issue is safety, she said. People shouldn’t be worried about sitting on their porch or letting their children play outside at a certain time of day because of what may be going on inside the abandoned home across the street or down the road.

The HAC has also worked to update the city’s ordinance for vacant, neglected and abandon homes, which hadn’t been revised since the late 1970s. The updated ordinance should come to City Council in the coming months.

“it’s just a hard thing for neighborhoods to survive when you have neglected housing,” Perry said.

By Josh Bergeron josh.bergeron@salisburypost.com Sweet sounds of the symphony echoed between buildings in downtown Salisbury Saturday during the 11th annual... read more