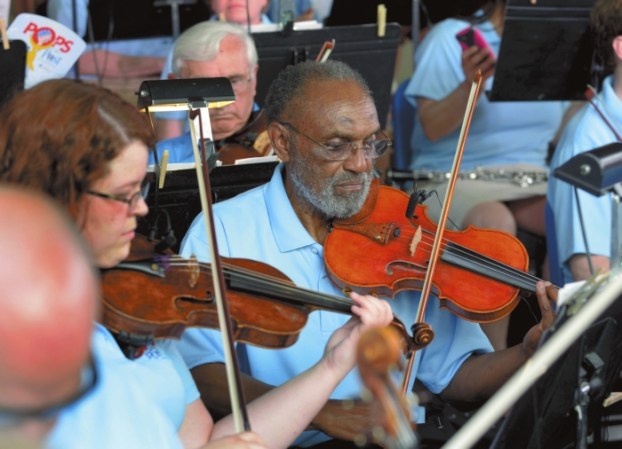 Leroy Sellers plays the violin with the Salisbury Symphony and has since the Pops at the Post started. Photo by Wayne Hinshaw, for the Salisbury Post

Sellers’ history with Salisbury Orchestra dates back to its start

Music began flowing thorough Leroy Sellers’ veins in his childhood, and it hasn’t stopped since.

Sellers, born in High Point, is a veteran of the Salisbury-Rowan Symphony Orchestra. He joined the orchestra in 1967 — one year after its inception — and continues to stroke the strings of his violin, making him the longest serving member of the Salisbury Orchestra. He’s played during all of the Pops at the Posts.

Sellers has also played the trumpet and the french horn, but he stuck with the violin because of its sound.

“I’ll keep playing until they fold my arms across my chest,” Sellers said. “Once you hear the concertos, there’s just something about the orchestra sound.”

He joked that his role in the Salisbury-Rowan Symphony Orchestra is the old grandfather.

Contemplating his musical beginnings, he said it may have its roots in the abundance of music in his neighborhood as a child.

“On the street there were trumpets and drums — music was everywhere in my neighborhood,” he said. “Although it was segregated.”

As a child, Sellers’ grandmother would pay for private lessons by cooking Southern-style food for a violin teacher.

After graduating from high school, Sellers received his bachelor’s degree from Tennessee State — a historically black college in Nashville, Tenn. He went on to the University of Connecticut for his master’s degree.

He joined the Charlotte Symphony Orchestra in 1963, before desegregation, but said discrimination never seemed to be a significant issue among musicians.

“It’s a different ballgame with musicians,” he said. “You leave all the garbage out in the streets and are part of the family.”

Sellers’ request to join the Charlotte Orchestra required approval of the symphony board. Sellers recalled that the board voted by a large margin to allow him to play in the orchestra.

“All of the board members said yes except for this one old fellow who said he would never play beside a black person,” Sellers said.

Salisbury’s orchestra started in the spring of 1966, when Dr. Samuel E. Duncan, fifth president of Livingstone College, collaborated with Dr. Donald C. Dearborn, then president of Catawba College, to establish a symphony. Catawba, Livingstone and the Salisbury City School System hired Albert Chaffoo to organize the first orchestra and teach.

The first concert was presented on Nov. 6, 1967, in Catawba’s Keppel Auditorium.

After years of playing, Sellers says it’s easier to learn patterns in music. Practice, however, is still required. Sellers says he practices about four times per week.

When it’s concert time, Sellers says he doesn’t have any special habits or warm-up routines. One example of a warm-up routine Sellers said he’s seen is musicians putting their fingers in water before a show.

On Saturday, the warm-up excercises for Sellers and the Salisbury-Rowan Symphony Orchestra started at Trinity Oaks on Klumac Road. The orchestra rehearsed at the retirement community before traveling to downtown Salisbury for the 11th annual Pops at the Post, a concert event that Sellers said is more laid back and relaxed.

“It’s fun for everybody,” Sellers said. “It’s like a great big festival.”

By Shavonne Walker shavonne.walker@salisburypost.com Lauren Lusk says its uncharacteristic of her mother, Carrie Bradshaw-Crowther, to just disappear. But her family... read more