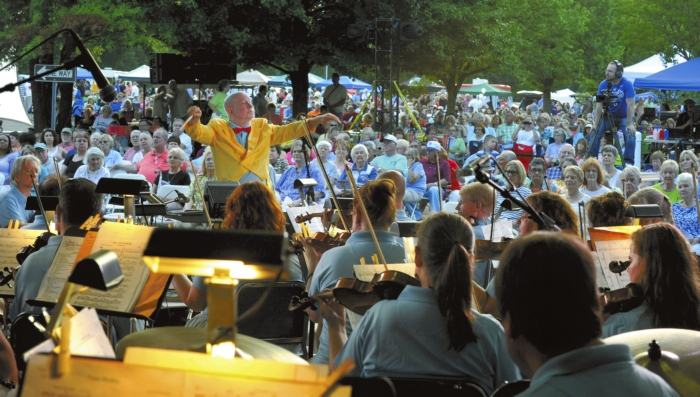 Conductor David Hagy leads the music at the Salisbury Symphony's Pops at the Post. Photo by Wayne Hinshaw, for the Salisbury Post

Sweet sounds of the symphony echoed between buildings in downtown Salisbury Saturday during the 11th annual Pops at the Post.

From dusk until stars shone overhead, the Salisbury-Rowan Symphony serenaded a crowd of thousands. This year’s Pops at the Post was themed “Rowan Life.” Songs came from movies, TV shows and popular culture.

Saturday’s events began in the afternoon, as cars began to fill downtown and tents popped up in parking lots adjacent to the Salisbury Post. The first to play was the Salisbury Swing Band, which started around 5 p.m. and drew a large gathering. The swing band’s selections included several songs from popular culture such as “Over the Rainbow,” “Come Fly With Me” and “What a Wonderful World.”

Laura Millspaugh, a singer in the swing band, said Pops at the Post is a highlight of the swing band’s performances throughout the year.

“It’s here in downtown Salisbury, and we are the Salisbury Swing Band,” Millspaugh said. “To be here in our hometown with such a great crowd, celebrating the community, it’s just wonderful.”

She said it’s important to appreciate swing music because many forms of popular music draw inspiration from classic swing artists.

Rain clouds briefly gathered and dumped a slight sprinkle of rain, threatening the Salisbury Symphony’s concert. However, the rain subsided quickly and clouds cleared in time for a concert that would mesmerize an expansive crowd.

“Nothing beats a full orchestra, and it’s not something you get to hear every day,” Millspaugh said. “There are cities around the country that would kill to have an orchestra in their town. We live in a town in America that’s rich in history, and I’m so glad that we have something as wonderful in the arts like this that we can offer.”

As the symphony began playing, Salisbury Orchestra Musical Director David Hagy introduced each song with a bit of comedy or, as the theme might suggest, the song’s Rowan County relevance. Introducing an early song, Hagy said Rowan County residents might get out of their work clothes soon after getting home. Hagy took off his yellow coat, folded it and quipped that the coat was as far as he’d go.

One particularly popular selection included four female Rowan County singers in addition to the Salisbury Symphony. The singers were Wendy Weant, Rosemary Kinard, Rebecca Stinson and Teresa Moore-Mitchell. The four ladies performed four songs, with one being a duet. Then, at the end of the songs, they sang an arrangement that meshed all four.

The combination of all four ladies singing during Pops at the Post required significant planning, and was conceived specifically for Saturday’s concert, Hagy said. He initially invited the four singers nine months ago.

An arrangement of “Uptown Funk” by Bruno Mars was also planned specifically for Saturday’s Pops at the Post, and just for the string section. It was arranged by a trumpet player in the Salisbury Orchestra.

The ladies drew cheers and a lengthy standing ovation. It would be one of several the symphony received throughout the night.

The final songs were a series of patriotic tunes — “1812 Overture,” “The Salisbury Post March,” and “Stars and Stripes Forever March” — that boomed past the boundaries of downtown Salisbury and drew the lengthiest ovations of the night.