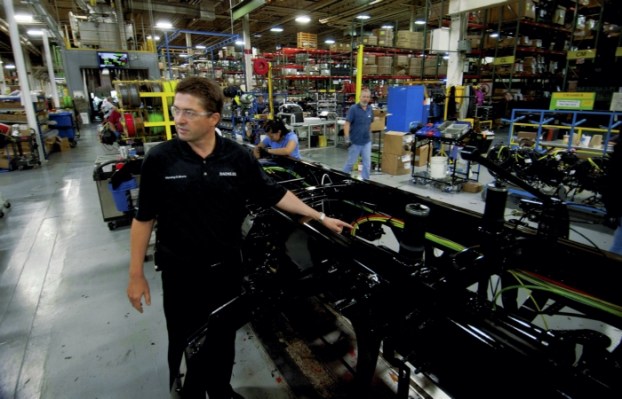 CLEVELAND — There is an incredible amount of activity happening inside the Freightliner plant.

It’s a thousand things happening at once, but in a way that allows the entire truck-manufacturing plant to work as a single unit. There’s assembly lines for the truck cabs, for the dash, and two for the chassis — where everything comes together and the finished trucks literally roll out the door.

Workers fill the lines. They move quickly and efficiently as they install parts, lay brake lines, or put a tire on. Other people zip around the factory on little motorized carts with flashing lights. There are workers staying busy by bringing more parts to each line — the goal is that when a worker on the line turns to grab the necessary part, it’s always there.

Every truck is numbered, and supplies and parts are organized so that there is a specific set for each truck.

Outside, the loading dock is lined with tractor-trailers. Supplies for the factory, part of Daimler Trucks North America, come from around the world.

The main assembly lines, A and B, move slowly across the 1 million-square-foot facility. Large monitors above each line display the number of trucks finished so far and the goal for the shift.

There is a lot of noise, but it’s not a cacophony. People don’t have to yell in order to hear each other.

Walking the floor early Friday afternoon was the plant’s new general manager, Henning O. Bruns, who came on in April. He compared the facility to a huge machine with all these little gears that need constant monitoring in order for everything to run smoothly.

“It’s a big setup, network, which needs to be well observed and guided,” he said.

Having good people is crucial to the process, he said, from the guys on the line to the management team.

The plant’s former manager, Mike McCurry, left in November to pursue other opportunities after 27 years with Daimler.

As he walked through the plant, Bruns, wearing black pants and a black, collared shirt with “Daimler” on the chest and a Nike logo on one sleeve, stopped every now and then to pick up a piece of cardboard or plastic. Lead by example, he said about keeping the plant clean.

Bruns, 50, has been with Daimler for almost 25 years. He grew up in northwest Germany and interned with the company when he was young. For the past three years, he was in charge of global product planning and strategy for Daimler Trucks. But in the past he worked in plant operations in places such as Germany, Brazil and Tuscaloosa, Alabama.

Bruns’ wife, Micah, who is a high school teacher, and their, daughter, Anna, are still in Stuttgart, Germany, where Daimler is based, but the two will come to America later this summer. Bruns is currently staying in an apartment in Mooresville while he house hunts.

Bruns, who has a master’s degree in industrial engineering from Texas Tech, said he returned to plant operations because it fits his personality.

“For me, it’s a very attractive field,” he said, adding plant operations involve motivating and leading people toward a common goal.

As general manager, Bruns said, he must have a clear vision of what he wants and be able to see the big picture. And he can’t be afraid to handle little details too — like spending a day or two on the factory floor to sort out an issue with the quality of the cab interiors.

“It’s not always easy, it’s fast paced … but it gives you a lot of personal, positive feedback,” he said.

Currently, the plant is making approximately 140 to 150 trucks a day, Bruns said. A hiring spree that began early last year has added 1,100 workers, mostly for the second shift, and the plant’s total workforce is now 2,900.

Bruns said new workers get most of their training on the job.

When asked how supply and demand affects the size of the plant’s workforce, Bruns said it governs the whole production network.

“We have a total annual demand of trucks,” he said, which is split up among different plants.

Bruns has started an intern program at the plant to attract young people to the industry. He said he considers it the company’s responsibility to help young people find their way in the world.

The program is for college students studying or thinking about going into the manufacturing sector. Bruns said interning gives the students a practical application of what they’re studying and can help them decide if it’s what they want to do for a career.

The trucking landscape in America is changing, Bruns said. Before, American truckers had always stuck to manual transmissions even while European haulers began using trucks with automated transmissions, which are more fuel efficient.

Now, a new generation of American truckers is moving to automated, Bruns said. He said his plant can’t build enough trucks with the DT12 transmission, which is a combination of automated and manual, to keep up with demand.

The Cleveland plant, known for making Freightliner’s Cascadia model and the new Western Star 5700, also assembles trucks that run on natural gas. Agility Fuel Systems, which makes natural-gas fuel systems and is building a facility in the Summit Corporate Center off Julian Road, is one of Daimler Trucks’ suppliers.

Efficiency and quality are a big deal at the plant. On one wall in Bruns’ office are dozens of printed charts and graphs. On another wall is a large monitor like the ones above the factory floor. Besides the number of trucks assembled, the monitor shows the amount of downtime for the two main assembly lines.

Line B has had 6 minutes, 24 seconds, of accumulated downtime so far during the day’s first shift, which starts at 6:30 a.m. and goes until 3 p.m. Downtime is the amount of time the line isn’t moving because of a problem.

Mostly it’s pretty minor stuff, lasting only a few seconds, Bruns said about what causes downtime. On the screen, little boxes with numbers light up to identity the station where the problem is.

After he started at the Cleveland plant, Bruns had a monitor installed in his office. “I typically want to see what’s going on,” he said.

The downtime for line B is colored green, meaning it’s doing well. But line A isn’t having its best day. It’s downtime is a little over 20 minutes and is colored yellow. If the downtime passes 30 minutes, Bruns said, it will probably impact the day’s total output.

Suddenly, Line B has a problem and the clock starts ticking. Bruns leans forward in his chair.

“We have an issue,” he says with a hint of excitement in his voice.

After a few seconds the problem is fixed, the clock stops and things move on down the line.

Never-too-late tap dancers rise to top of the heap

MOCKSVILLE — To the strains of Frank Sinatra’s “New York, New York,” the little town blues melted away this week as... read more