Southernmost Portugal: the most unspoiled stretch of coastline in Southern Europe 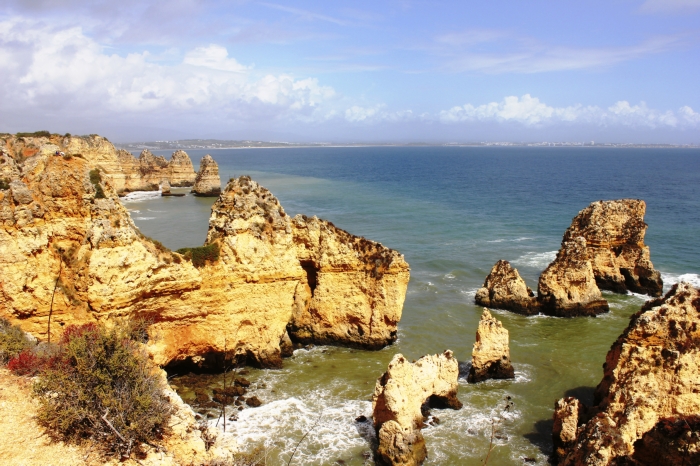 Note the contrasting colors of the Atlantic: white foamy turbulent water along the cliffs, light brown water from the sandstone washed off by the waves, and the dark blue of the deeps farther out.

If you have a strong desire for beaches and coastal hikes, get acquainted with Portugal’s southernmost region of Algarve. Here you will find many trails that meander in or around cliffs, coves, canyons and hills hugging the most unspoiled stretch of coastline in Southern Europe.

By far the highlight for me in visiting this southernmost region of Portugal was the stunning sandstone caves and grottos of the Algarve, arguably some of the most striking and breathtaking coastline you will ever witness. The caves and grottos are a beautiful mix of cliffs and sandstone rocks overlooking the sea.

These amazing land forms have and are being formed by erosion, compliments of the constant pounding of waves from the tireless Atlantic Ocean.

The grottos are truly a gift from Mother Nature as she has created a masterpiece that will stop you in your tracks.

Perhaps the most beautiful natural feature of the Algarve region is the Ponta da Piedade near Lagos, Portugal. The shoreline is formed of heavily weathered cliffs that have carved into rock pillars, natural tunnels and hidden grottos. The sandstone cliffs of irregular angles stand at stark contrast to the deep turquoises and greens of the unpredictable seas. I stood in awe marveling at the 65 foot high cliffs that shined of vivid golden hues in the afternoon sun.

Another impressive feature of the Ponta da Piedade, were the thousands of man-made steps that are carved into the contorted cliffs. Climbing them in the Lagos heat was intense but rewarding as the surrounding views from atop was breathtaking.

If you want a more close-up view of the grottos and cave formations you can purchase a boat tour. Tours cost about 10 – 15 Euros per person for a shared tour and 20 – 25 Euros for a private tour. Boat tours last about 30 – 40 minutes from Ponta da Piedade or one to one and a half hours from Lagos. For a more adventurous and ambitious method to explore the area, you can rent a kayak for 25 Euros per person.

Many visitors visit the Ponta da Piedade for the amazing cliffs and rock formations, but there is a diverse selection of wildlife in the region. During the spring months, the cliffs are alive with nesting herons, various raptors, and flowers blossom (especially orchids) from January until late spring with an abundance of wild figs.

The many beaches in the region are surrounded by a great network of paths that take you along the edges of the spectacular cliffs. I truly enjoyed this unique opportunity to feast my eyes over some of the most dramatic vistas overlooking the Atlantic Ocean.

One of the beaches that I visited was Praia (beach in Portuguese) do Camilo. This charming little beach was tucked away in a beautiful cove adjacent to some of the most colorful cliffs I’ve ever seen.

The eroded rock created a protected and isolated cove with just enough sand for a beach and stunning views. Be forewarned though, as there are over 200 wooden steps to gain access to this wonderful beach. After climbing back up the same 200 steps you walked down, you will want to reward yourself with some great seafood at O Camilos restaurant at the top of the stairs.

Do yourself a huge favor and visit this Portugal paradise. After visiting this rugged yet charming Portugal coastline don’t be surprised if you tell yourself, I don’t want to leave. I know I did.