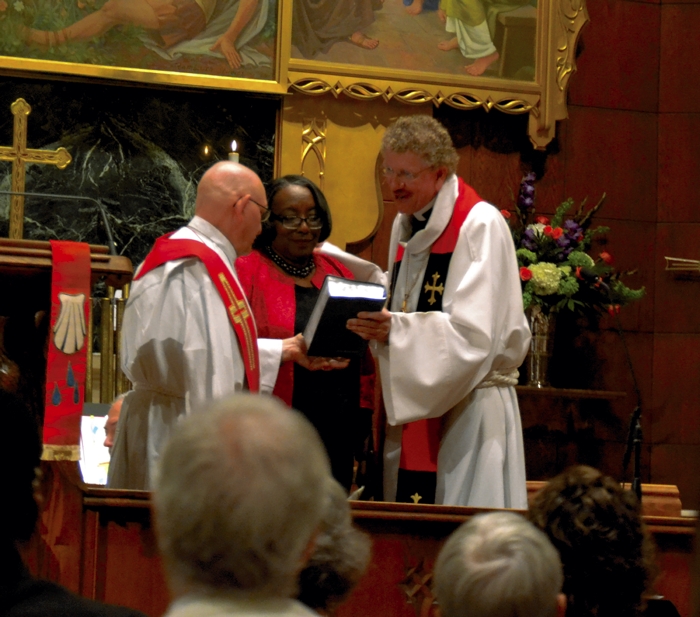 During his very first Sunday as a pastor more than 40 years ago, the Rev. Dr. Leonard Bolick got an early taste of the challenges he would face as bishop of the North Carolina Synod of the Evangelical Lutheran Church in America (ELCA).

“Edith walked out of the church and said, ‘It was too hot.’ Iris came out and said, ‘I thought I was going to freeze to death.’”

Disagreement among people of faith is inevitable, Bolick learned, whether it’s about the temperature in the sanctuary or who may lead a church.

“The challenge has always been for us to think about where we do agree,” says Bolick, who will be retiring this summer after more than 18 years as bishop of the North Carolina Synod-ELCA upon completion of his third term. A new bishop will be elected at the NC Synod Assembly at the end of May.

ELCA synodical bishops do not typically serve as long as Bolick, who is currently the longest-serving bishop in the ELCA.

According to many who know him, Bolick handled the resulting painful discord among his Lutheran family with wisdom and grace, honoring all positions and continuing to care for people even as some members and congregations chose to separate from the ELCA. He also let those disaffiliating congregations know they would be welcomed should they decide to return to the ELCA.

“I think people of good conscience, people of strong faith, can be in different places,” Bolick says.

When the dust settled, Bolick contemplated not being available for election to a third term. Some serious soul-searching, however, prompted him to change his mind, and he was re-elected in 2011.

At the 2013 Synod Assembly, Bolick unveiled an initiative called “Forward Together. In Christ. In Community.” Congregations were asked to pray, participate in Bible studies, and engage constructively with their communities.

“It’s the most exciting and joyful time that I’ve had in the North Carolina Synod,” Bolick says. “Congregations are anticipating the future, are asking what we should be doing for the future.”

During his many years as bishop, Bolick has been an important mentor and spiritual guide for many.

“I probably leaned from my door into his office at least three times a day for him to patiently explain some mystery,” said the Rev. Beth Kearney, who began to work at the synod office in Salisbury 23 years ago. Bolick, she says, is “the rare extrovert who can also be quiet and listen,” and who takes care to “include everybody who needs to be included” in decisions.

Bolick’s inclusive nature led him to develop a relationship with the African Methodist Episcopal Zion church. In 2011, the AME Zion Church and the Evangelical Lutheran Church in American gathered for a covenant worship service at St. John’s Lutheran Church in Salisbury and sponsored a summit at Hood Theological Seminary, which is next door to the synod office. The relationship with AME Zion is now rooted in a national covenant.

The Rev. Dr. Ron Rinn, senior pastor at Augsburg Lutheran Church, has known Bolick for years. When they were in seminary together, Rinn says that Bolick, who is sometimes said to resemble NASCAR driver Richard Petty, was known for tooling around in his car – fast enough for the seminary president to have a little chat with him about slowing down.

Bolick’s ability to negotiate winding roads quickly was honed in Blowing Rock, N.C., where he grew up in a family that was deeply connected to the small Lutheran church his ancestors had helped build. At the age of 12, his mother became the church organist and continued in that role for the next 73 years. His father was a Sunday school superintendent for more than half a century.

Bolick didn’t travel far for college, pursuing an undergraduate degree in history from Appalachian State University. When he graduated in 1968, he couldn’t ignore his sense that God was calling him toward a ministry. He entered Lutheran Theological Southern Seminary in Columbia, S.C., earning a master of divinity degree in 1972. He would later earn two doctorates of ministry, from McCormick Theological Seminary and the Graduate Theological Foundation in South Bend, Ind. He has also received an honorary doctorate from Lenoir-Rhyne University in Hickory, N.C.

While he enjoyed his seminary studies, Bolick still wasn’t sure he wanted to be a pastor. If he didn’t receive a call, he figured he could go into sales work – he’d sold cookware while he was in college and found sales very rewarding. But the call came, from Calvary Lutheran in Concord, where he served for 12 years. That service was followed by a call to St. James Lutheran in Fayetteville, his last job as a pastor before joining the North Carolina Synod staff in Salisbury in 1986 to be an assistant to the bishop. He served with two different bishops before being called and elected to be bishop in 1996.

While he never got to pursue that sales career, he says that his sales experience in college actually prepared him well for ministry. “I learned how to meet people, carry on a conversation, and how to listen,” he says.

Rinn would agree with that. Bolick, he says, asks “wonderful invitational questions” of people and is an astute listener who doesn’t formulate a response without fully hearing from the other person.

Bolick’s humility has made him equally comfortable sitting around a campfire with the native people of Papua, New Guinea, connecting with youth members, or starting a conversation with the leaders of the AME Zion Church, says Donna Prunkl, who worked with Bolick as the synod communications coordinator for 11 years.

Bolick has worked not only with the church but with Lutheran institutions and organizations like Lenoir-Rhyne University and Lutheran Services Carolinas.

“It has been my privilege to have worked with him for all these years, and both the NC Synod and Lenoir-Rhyne are stronger for his leadership,” says Lenoir-Rhyne University President Dr. Wayne B. Powell.

Ted Goins, president and CEO of Lutheran Services Carolinas, has been grateful that Bolick has embraced the social services ministry as an important part of the church.

“I have always felt comfortable calling Bishop Bolick to keep him informed and to seek his counsel,” Goins says. “Every time, he has been supportive, shared wisdom and common sense, and revealed at least one nuance or issue I had not considered.”

One of Bolick’s priorities has been caring for pastors. The Rev. Carl R. Sachtleben, former senior pastor at St. John’s Lutheran Church in Salisbury, speaks for many when he says that Bolick has a “genuine pastor’s heart.”

Kearney shares that view. “His passion is proclaiming the gospel with care for both leaders and the church itself,” she says.

“He takes his role as pastor to pastors seriously, and I’ve seen him agonize over their trials and rejoice with enthusiasm in their triumphs,” Prunkl says.

Bolick says he couldn’t have managed his role as bishop if not for the unwavering support of his wife, Rita, whom he met while he was an intern at Holy Trinity Lutheran in Hickory. In June the couple will mark their 41st anniversary. Their son, Joseph, is a pastor in Richmond, Va., and daughter Sarah is living in Chicago and pursing master’s degrees in both theology and social work.

Bolick says that when his term as bishop is over, he and Rita will move to Blowing Rock.

His down-to-earth approach will be missed.

“He speaks people’s language,” Rinn says.” He likes being with people, and he’s just got a way of putting people at ease. He laughs readily, and it’s a good hearty laugh. I think he just celebrates life.”

Thanks to Katie Scarvey, Lutheran Services Carolinas communications specialist, for this article and to Jon Lakey, Salisbury Post photographer for photograph.