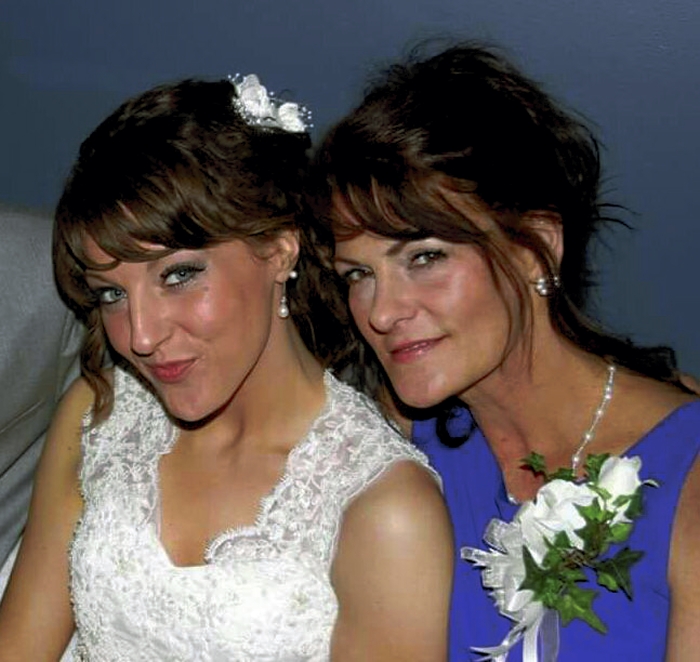 Carrie Bradshaw-Crowther, right, has been missing since Tuesday and her daughter, Lauren Lusk, shown here, says her mother was due to have a C-section for her high risk pregnancy, but she disappeared. Bradshaw-Crowther was last seen at a Statesville gas station and is likely to be headed to Linville Gorge. Submitted photo

Lauren Lusk says its uncharacteristic of her mother, Carrie Bradshaw-Crowther, to just disappear. But her family believe that’s exactly what happened.

Bradshaw-Crowther, 49, a native of Salisbury, has been missing since Tuesday morning. She is nine months pregnant.

Lusk said she drove into town on Saturday with her wife, Shelbi, to prepare the house for the baby.

They “hung out” and helped her mother get ready before for Tuesday appointment, when she was scheduled to have a C-section at a Charlotte hospital.

Lusk said she needed gas early Tuesday before heading to the hospital.
“We were gone about seven or eight minutes. When we got back, she was gone,” she said.

She said the lights were off and the door was unlocked to the house. Her mother’s suitcase and clothes along with her purse were still in the home, but her wallet and cellphone were missing.

“Nothing was missing. She was just gone,” Lusk said.
Initially she thought her mother had gone to the store and decided to give her some time to return. But when 6 a.m. came around, which was the time they were supposed to be at the hospital, Lusk began to worry.

She said her mother was happy and being her “goofy” self, making up songs about having a baby.
“It was a shock to us because she was so excited about it,” Lusk said
They’ve had no contact with Bradshaw-Crowther since they last saw her Tuesday.

Lusk said her mother has had anxiety about the pregnancy, but on the day of her scheduled C-section, she was happy.

Lusk said her mother is “a well-likable person” who is friendly to everyone. She called her mother “personable” and loved by everyone.

Bradshaw-Crowther was diagnosed with vascular Ehlers-Danlos Syndrome, putting her at risk of rupturing major blood vessels and possibly rupturing her uterus and intestines, making it difficult for her to have a natural birth. A preterm cesarean was necessary in Bradshaw-Crowther’s case.

Lusk said this situation is hard because she has no idea what happened to her mother. Her mother has never disappeared for no reason before. She prays her mother makes a safe return home.

The family drove around looking at hotels. Bradshaw-Crowther was spotted at a Statesville gas station, but hasn’t been spotted since. She would be driving a champagne colored 2001 Mazda MVP minivan with Kansas plates that Lusk said are expired.

Salisbury Police officials have said Bradshaw-Crowther is likely to be headed to Linville Gorge.

As to Linville Gorge, Lusk said the place is sentimental to her mother because they did a lot of hiking and traveling there when she was younger.

Crowther’s baby, a girl, is to be named Olivia Grace, Lusk said because her mother wanted to “live by grace.”

Investigators ask anyone with information on the  whereabouts of  Bradshaw-Crowther to contact the Salisbury Police Department at 704-638-5333 or Crime Stoppers at 1-866-639-5245.