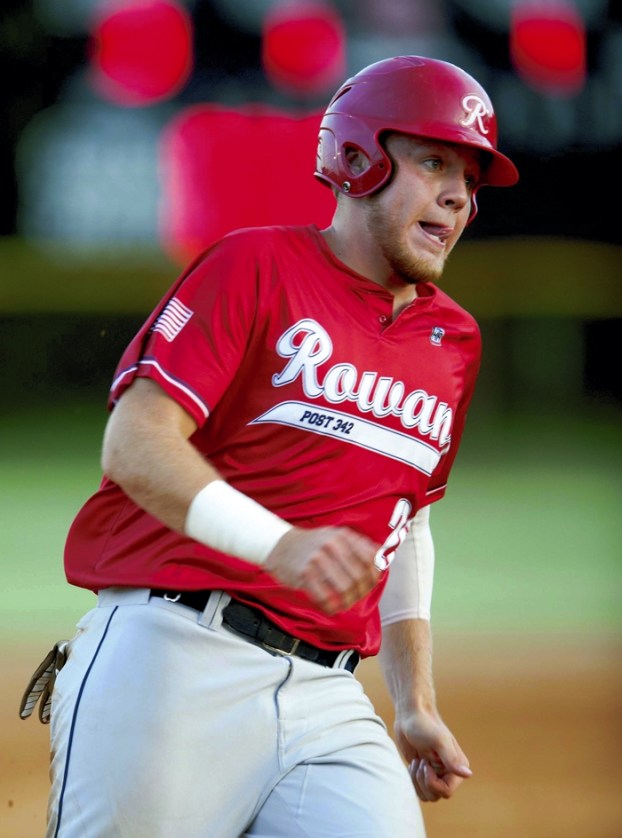 JON C. LAKEY / SALISBURY POST Rowan's Heath Mitchum was the winning pitcher and had the walk-off hit in his team's 6-5 victory over Southern Rowan on Saturday night in American Legion baseball action.

SALISBURY — It was if Rowan County’s Heath Mitchem had been granted three wishes by a genie for his 18th birthday.

Mitchem’s team won in dramatic fashion at Newman Park on Saturday. Mitchem had the walk-off hit. Mitchem also was the winning pitcher.
“I’ve got high expectations now for the rest of the birthday,” Mitchem quipped.
Mitchem provided stirring drama at the end, but it was mostly ugly. Embarrassed by Rowan County, 14-1, on Friday, Southern Rowan (6-5) came to play in the rematch, fought on every pitch, took advantage of frequent Rowan County mistakes and came within two outs of an unexpected victory.
“It was exactly like Coach (Jim) Gantt told us it would be,” Mitchem said. “It didn’t matter how badly we beat them Friday, this was a new game, a new day, and they were going to fight for it.”
Gantt has seen interesting things happen in baseball. The Catawba College team he coaches bludgeoned Belmont Abbey, 27-7, this season, then lost to the same team the following day.
“Baseball is crazy, but that’s why it’s so fun,” Gantt said. “Every game is a challenge.”
Well-stroked doubles by Chase Labbe (off the left-field wall) and Jake Pritchard (to the center-field wall) gave Southern Rowan a 1-0 edge in the second. Harrison Baucom’s double down the left-field line keyed a two-run third inning that put Rowan County up 2-1.
Kacey Otto’s RBI-single pushed Rowan County (4-4) in front, 3-1, in the fourth inning, but Rowan made two errors in the fifth and three in the sixth, as Southern Rowan came back.
Matt Honeycutt’s two-run single that bounced up the middle gave Southern Rowan a 4-3 lead.
Jeremy Simpson’s RBI-single made it 4-4 in the bottom of the fifth frame, but Rowan County had two runners thrown out at the plate in that inning.
Ryan Bearden’s run-scoring single put Southern Rowan ahead again, 5-4, in the top of the sixth inning. That’s how it stayed until the bottom of the ninth.
“They got key hits and they got hits right after we made mistakes,” Gantt said. “We screwed up a lot, and it looked like we panicked a few times.”
Pitchers Tyler Scruggs and John Owen got Rowan County through seven innings. Alec Hamilton worked the eighth, while Mitchem pitched a 1-2-3 ninth inning. Two of the players Mitchem got out were his teammates at Carson High School.
“When you’re pitching against friends, you throw a little harder,” Mitchem said.
Besides gunning down two Rowan runners at the plate, coach Ben Hampton’s Southern Rowan squad turned three double plays.
“We pitched it pretty well and we made some good plays defensively,” Hampton said. “But we’re still struggling at the plate. When you’re hitting the ball in the air 70 percent of the time like we are, you won’t get many hits.”
Bo Corriher pitched five innings for Southern Rowan. Matt Brown relieved him and was stout in the sixth, seventh and eighth.
When Brown retired Baucom on a routine fly ball to start the bottom of the ninth, it appeared Southern Rowan was headed for only its fourth victory at Newman Park in the 20-year series.
But then Michael Caldwell slapped a solid single and Juan Garcia picked up an infield hit and Rowan had the tying and winning runs on base.
Then Riley Myers lifted a towering drove down the right-field line.
“I hit that ball so high I had no idea what would happen,” Myers said. “I thought he (Bearden) might catch it, but I also thought it might hit the wall or go out.”
Carrying the tying run at second, Caldwell thought Bearden would catch it. He had retreated to second base to tag up, so when the ball fell safely in fair territory, Rowan County fans roared, but Caldwell still had nearly 180 feet to travel to tie the game. Bearden’s throw was strong and accurate, and Caldwell was ruled safe at home on a close play — for a 5-5 tie.
“Michael had enough speed that he was still able to score,” Myers said.
Garcia reached third base, while Myers played it safe and stayed at first. Mitchem was next, and Hampton called on Bearden, another Carson kid, to pitch to him.
Bearden rarely pitches, but he came in winging bullets.
“I’d only seen Ryan throw bullpens at Carson, but he’s a throw-the-crap-out-of-it guy, all fastballs,” Mitchem said. “He was in there for a strikeout, and I was swinging later against him than on anyone I’d seen all season. I was way behind on two balls I fouled off and almost took my mom out on one of them. She wasn’t too happy with me.”
After fighting off a series of pitches, Mitchem got jammed, but he was strong enough to fist the ball over Bearden’s head and toward the middle of the diamond. It was enough for Garcia to score the winning run.
“Southern played a lot better tonight and we made a lot of mistakes,” Myers said. “The good thing was we still found a way to win.”
Rowan out-hit the visitors, 15-4. Southern Rowan hosts Eastern Randolph tonight in a league game. Rowan County is at Randolph County for its first league contest.