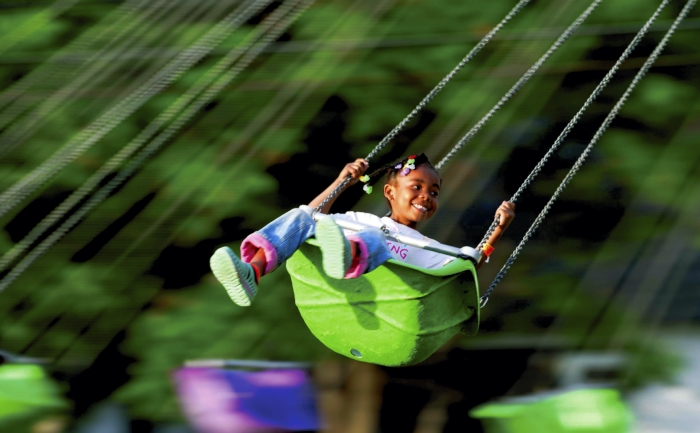 Children, parents, family and friends enjoyed the mild temperatures as the sun set over the carnival, which runs Friday and Saturday nights too.

A DJ played music as people filled their stomachs with food — hot dogs, fried and barbecued chicken especially — and children played and went on the rides, which included a ferris wheel, train, fun house and a giant slide among others.

Dan Haddock, a legion member who retired from the Army and was a paratrooper, said he’s been coming to the carnival for 23 years.

“The kids look forward to it,” Haddock said.

Local disc jockey Aaron Sewell was walking around with handfuls of CDs. Sewell said he is selling the CDs, which have his songs on them, for $5 each — and plans to donate the money to J.C. Price.

The J.C. Price Post was established June 2, 1920, on Monroe Street and later moved to its current location at 1433 Old Wilkesboro Road. It is celebrating its 95th anniversary this month.

Post Commander Mae Carroll said she had hoped there would be a larger crowd, which grew as the night went on. In recent years, the poor economy has been blamed for low turnouts at the carnival.

The event used to be the post’s major fundraiser, but there was doubt as to whether the carnival would happen this year after revenues dwindled the last few years. After an outcry from people who wanted the show to go on, organizers decided to have the carnival this year.

This year’s carnival is dedicated to the memory of Roy R. Leazer, a Army veteran of World War II who was a member of the Legion post for 63 years.

As the sun disappeared below the horizon and twilight took hold, candy apples and cotton candy filled the mouths of young and old alike. Sally Janel Garcia and Rahsear Burke won shiny bicycles in a raffle.

Grills stayed hot and conversations carried on, sure to last late into the night.