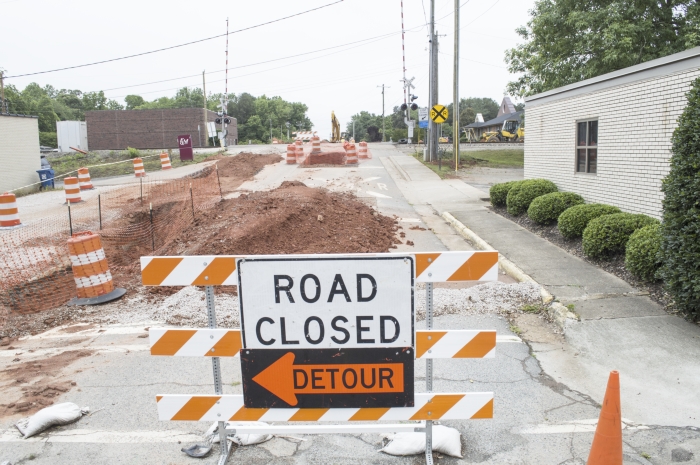 A railroad crossing near the intersection of Centerview and Main streets in China Grove has been closed for several months and frustrated residents and public officials alike. As a way to prevent damage to roads from the construction work, China Grove has proposed limiting weight on town roads. Josh Bergeron / Salisbury Post

CHINA GROVE — Frustrations with the pace of railroad construction continue to fester in China Grove, where the town board could soon consider implementing a weight limit on trucks and other vehicles.

At its next meeting — July 7 — the China Grove town board could consider an ordinance that would restrict the weight allowed on town-controlled streets to 6.5 tons. An ordinance is currently being drafted and researched by China Grove Town Attorney Tom Brooke.

Brooke said he was told to draft the ordinance by Town Manager Ken Deal. Though it hasn’t yet been finalized, the ordinance would restrict the total weight of all vehicles to less than 6.5 tons. If a truck is carrying a load that’s 5.6 tons and the vehicle is 1 ton, it would be overweight.

During Tuesday’s meeting, Deal publicly announced the town was drafting a resolution.

“Blythe (Construction) is absolutely destroying our roads,” Deal said during the meeting. “We haven’t even seen the worst yet. The worst is coming when they start hauling rocks.”

Mayor Don Bringle said the N.C. Department of Transportation denies responsibility for any road damage that has already occurred, forcing the town to pay for any repairs. However, Deal said the state agency has agreed to begin rerouting construction trucks off of China Grove’s streets.

“We don’t know how long that will last,” Deal said during the meeting. “We just feel like we need a resolution to keep the weight limit to 6.5 tons.”

It’s the second straight meeting where the town board has publicly criticized the pace of work and its effect on China Grove.

During the previous board meeting, the town invited state Department of Transportation staff to the meeting, issuing sharp criticisms of work progress and seeking answers about when streets would reopen.

Bringle and other town officials have concerns about a second closing that’s scheduled to occur in China Grove. Currently, the intersection of East Centerview and Main streets is closed. It has been for months. Initially, the work there was projected to wrap up in two months.

Its closing has affected downtown business, traffic and some emergency response times, Bringle said during Tuesday’s meeting. He said the crossing also isn’t projected to open before the town’s annual Farmers Day celebration, which draws large crowds of people to the small, South Rowan town.

Farmers Day is currently scheduled for July 18, according to China Grove’s website.

The Department of Transportation in the future is also scheduled to close a railroad crossing near the intersection of Church Street — N.C. Highway 152 — and North Main Street. N.C. 152 is one of the only current routes to get directly from U.S. 29 to downtown China Grove.

“We haven’t seen the worst yet,” Bringle said.