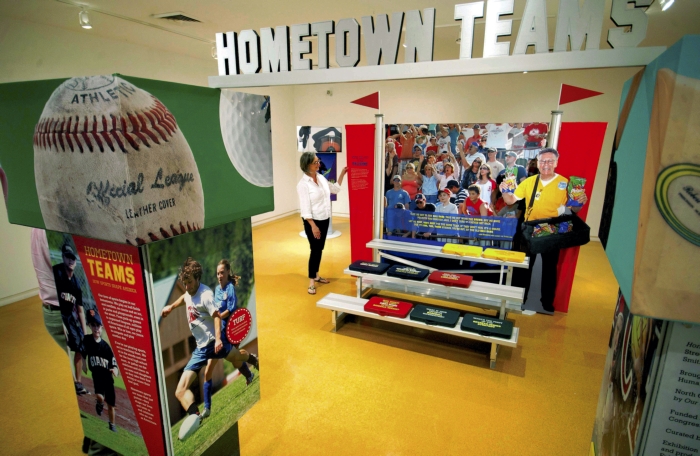 The Museum on Main Street traveling exhibition opens today at Waterworks, located at 123 E. Liberty St., and will be in the Norvell and YPG Galleries through July 18.

But the center’s focus on sports doesn’t stop with the Smithsonian. In the Stanback Gallery Hall, award-winning local photographer Wayne Hinshaw will offer a close-up look at hometown sports through 36 pictures taken between 1972 and present day.

Also, in the Osborne and Woodson galleries, the National Sportscasters and Sportswriters Association and Rowan Museum Inc. have provided photographs, art and artifacts fitting the sports theme.

The weekend serves as a perfect kickoff for the Waterworks sports theme because the NSSA state and national winners will be in town for their annual meeting.

A Sunday afternoon sports festival full of activities will be held outside Waterworks, complete with a live broadcast from WSAT and five NSSA members who will be inside the museum signing their books.

“Hometown Teams” normally is set up in history museums or public libraries, but Waterworks represents the first art gallery serving as a host. It’s also the first time Waterworks has housed a sports-related exhibit.

Anne Scott Clement, executive director of Waterworks, said the center started applying for the traveling exhibition two years ago, and she knew then it should connect to the NSSA weekend.

Salisbury is one of six communities in North Carolina chosen to have this Smithsonian exhibition between February and December of this year. It already has been in Mount Airy and Wake Forest.

Likewise, “Hometown Teams” is on display in four other states at present.

The whole exhibition arrived in a Mayflower moving van Tuesday, packed in 21 black trunks on wheels. Prior to its srrival, Waterworks had received templates for the gallery floors to outline where each section of the exhibition would go.

“It came with a nice big handbook,” Clement added of the instructions for putting it all together. “It’s probably easier for us, because this is what we do all the time.”

“Hometown Teams” seems to take in all sports, not just the major ones such as football, basketball and baseball. It’s also highly interactive and allows visitors to use all five senses. Amid backdrops such as bleachers and lockers, patrons can view monitors, push buttons, look through stereoscopes, squeeze mustard bottles and learn why sports play such an important role in society.

The bleacher cushions have questions such as “Why is the Star-Spangled Banner often played at athletic events?” and “What’s the point of the seventh-inning stretch?” You have to lift up the cushions for the answers.

Museum on Main Street also invites the public to share their local sports stories on its “Stories from Main Street” website — www.storiesfrommainstreet.org, or through a free mobile application available from the Mac App Store or Google Play Store.

Both of those platforms record and map the location reflected in the submission and will accept written and audio stories, in addition to videos and photographs. At Waterworks, visitors can listen to recordings and make their own recordings.

Hinshaw also will be at Waterworks Sunday afternoon. Clement is thrilled with the diversity of sports and play his photographs represent.

There are images from golf matches and basketball and baseball games, too, but all the photos are moments in time that could be showcased in any exhibition, not just one on sports.

“In covering local sports,” Hinshaw says, “the people you are photographing are ordinary, everyday people just playing sports in their own environment. With the click of the shutter, you are capturing memories for them.”

Hinshaw remembers as a young photographer attending a Southern Short Course in news photography and being influenced by a lecture given by the Washington Post’s Dick Darcey.

“He said to go to a sporting event and treat it as a news event,” Hinshaw recalls. “Cover it like a political rally, a protest, or maybe a concert.”

Darcey recommended always getting photos of the star players, and anyone demonstrating they were leaders of the team. He stressed the importance of capturing a game’s key play and a game’s best peak action.

“If you covered these three elements, you would have whatever the writers would be writing about in the next day’s newspaper,” Hinshaw says.

But Hinshaw has added his own things to Darcey’s sports prescription over the years.

“Look for details in the players’ games,” he says. “Different socks, newly taped wrists, special protective gear, or raindrops on the football helmets. Look for the ‘characters’ of the game.

“Some players will clown around. Some fans will wear weird clothes or hats. … Anything and everyone at the game should be part of the photo coverage, if they make themselves part of the games.”

Hinshaw says with sports photography there are always an action and reaction, and the reaction often makes the better image. “With sports,” he says, “… you want to pack as much information and emotion into that split moment as possible to tell a story.”

Hinshaw’s exhibit also represents a stroll through how equipment and processes have changed for photographers through the years. They include black-and-white images from 33mm Tri-X film, transparency film, color negative film and digital photos.

“Although I have used digital color equipment solely during the last 10 years or so, I still believe the older black-and-white photos are special,” Hinshaw says.