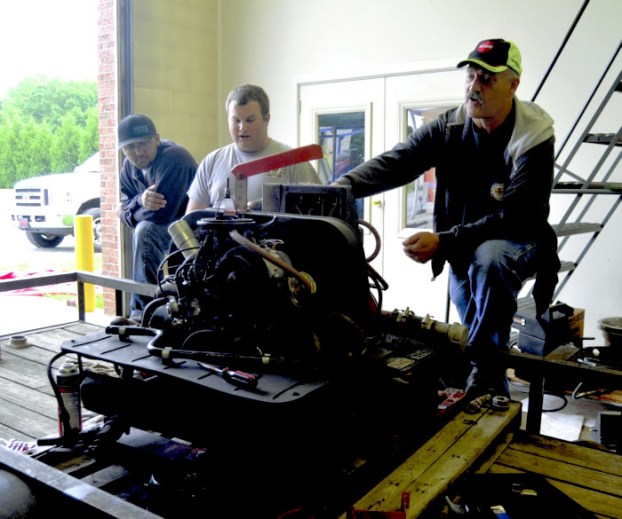 Millers Ferry Fire Chief Bobby Fox, right, and two other Millers Ferry firefighters look over an engine that will eventually be placed on a fire boat for the department. Some minor repairs need to be made to the "second-hand" engine before it can be placed in the boat. The need for a boat has drawn some contention among some residents. Shavonne Walker/Salisbury Post

Millers Fire Chief Bobby Fox revs an all black engine sitting on the back of a trailer as other firefighters stand to admire the piece of equipment. The engine, which the department got second-hand from Montana, will be installed in a soon-to-arrive fire boat.

The boat has been at the center of some contention amongst some people in the community, but Fox says it is a needed tool to help with fire response on High Rock Lake. The discussion about getting a fire boat began almost 10 years ago.

The boat cost the department $45,576.41, according to a purchase agreement between Millers Ferry Fire Department and Wateree Marina in Camden, S.C. The engine cost the department another estimated $5,800. The price of the boat and engine is just above half of the $100,000 that was quoted at a recent county commissioners meeting.

On Wednesday, Millers Ferry Fire Capt. Chet Hedrick and a few others were working to get the engine in tip-top shape before the boat, a 2015 Yamaha Sea Ark, arrives.

Those in opposition to the purchase of the boat and accompanying equipment say the boat only serves those in gated communities including Anchor Downs, which is surrounded by High Rock Lake. Others have argued the boat is an unnecessary cost to the fire department.

Fox argues the need for the boat boils down to being able to provide adequate fire service to residents within the Millers Ferry fire district, many of whom live near and around High Rock Lake.

He said there just isn’t any sufficient fire coverage in those areas because of lack of access to the lake, which is a water source for the fire department. Millers Ferry fire stations are unique in that they aren’t closely located near any fire hydrants. The closest hydrant is near Interstate 85, making the department vulnerable.

The fire boat will allow fire crews to pump water from the lake directly onto a structure or from the lake to the boat and then to a truck. The boat will be able to pump 650 gallons of water a minute and takes just two people to man it.

A fire destroyed a home in the Anchor Downs subdivision about three years ago, which Fox blames on a lack of water sources. The firefighters were essentially unable to get water quick enough to the fire because it had to be pumped from another source when the lake could’ve been a source and was within 30 feet of the structure, Fox said.

“We had water all around us with no real way to access it,” he said.

Fox said the boat is no different from other equipment they’ve purchased in the past to help with special response including a ladder truck for industrial sites and a brush truck for the farming communities.

“The lake community is one-third of our fire district,” Fox said.

The fire department has also recently requested a 1 cent tax increase for the department. Fox said that tax will bring an estimated $58,000 into the department’s budget.

A fire tax would alleviate some of the costs associated with adding a second fire station and additional staff. The department had to increase the budget in order to cover the operating costs of two stations.

Fox said money was put aside from the previous budget year, but there are some unknown costs as the money put aside was just an estimate of what the new station would cost to run. Fox said electrical and natural gas for the new station added $4,000 and $3,000, respectively, to the fire department’s budget.

“It was a revaluation year,” Fox said as the reason his department and others have made recent requests for a fire tax increase.

The fire department lost $16,000 from its budget this year because of revaluations along with the added cost of a second station and the department’s audit service fee increasing by $1,500.  Fox also said worker’s compensation and liability insurance almost doubled, increasing by $5,000.

“We have no control over these costs,” Fox said.

He doesn’t expect to add another firefighter until July 1, during the new budget year. He said because most people who volunteer don’t work in the area, and they saw the need about 10 years ago to add paid personnel during the day shifts.

Fox believes the last fire tax increase the department requested was about four years ago, and before that about 10 years ago.

The fire department is but one line item among the many in the county budget, which has not been approved. The county commissioners are expected to further discuss the budget at their June 15 meeting.