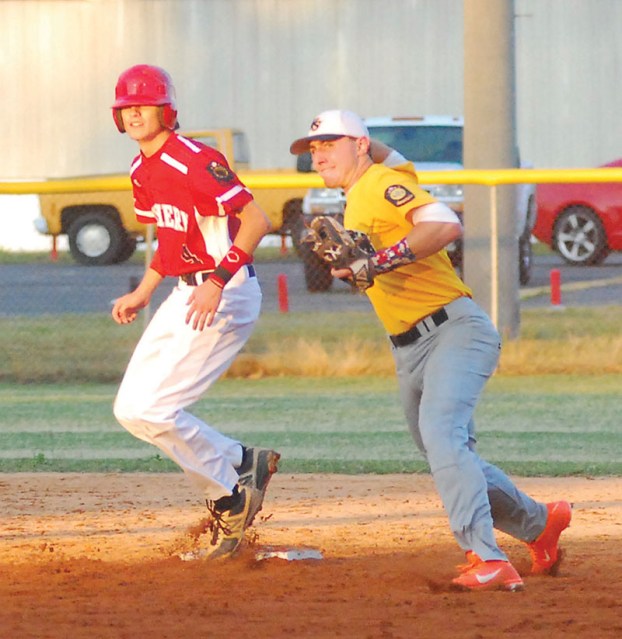 ADAM HOUSTON / SALISBURY POST Southern Rowan's Chandler Corriher (4) is out at second base as Winston-Salem's Junior Snow tries to turn a double play on Thursday during an American Legion baseball game at South Rowan High.

LANDIS — Matt Honeycutt’s 380-foot flyball in the bottom of the ninth had walkoff homer written all over it when it screamed off his bat, but it was an unseasonably cool night.

“Any other night and any other park, that’s a walk-off,” Southern Rowan coach Ben Hampton said with a sigh.

It wasn’t Southern Rowan’s night in a 6-5, 10-inning loss Thursday to a Winston-Salem club that was shorthanded due to graduation activities. Talented Winston-Salem (8-1, 2-0) had opened league play Wednesday by pounding previously unbeaten High Point.

“We were five players short, so we’re happy we found a way to get out of a tough place to play with an extra-inning win,” Winston-Salem coach Mike Lovelace said.

Winston-Salem scored the decisive run in the 10th when Cole Weiss singled to left-center to drive in Shane Sullivan from second base.

Weiss, Winston-Salem’s No. 2 hitter, had already beaten out two bunts and appeared likely to bunt again, but Lovelace had him swing away. It paid off.

“We had 19 hits against High Point, and we’re averaging 17 hits per game,” Lovelace said. “So why bunt? We had confidence Cole could drive a run in. He came through with a big hit.”

Post 55 scored four runs in the first inning against Southern Rowan right-hander Dillon Atwell and had the bases loaded in the second, looking for an early knockout.

“I just didn’t have it early,” Atwell said. “But I definitely had defense behind me and we fought our way back into the game.”

“Dillon locked in after the second inning,” Hampton said. “He was working out of jams, getting outs on flyballs and groundballs.”

Southern Rowan got on the scoreboard in the third inning when Matt Honeycutt singled home Eric Stowe.

“Our approaches were the best they’ve been all season,” Hampton said.

Atwell put zeroes on the scoreboard in the fifth, sixth, seventh and eighth.

“Hats off to Atwell because his pitch count had to be getting up there, but he battled and he gave his team a chance to win,” Lovelace said.

It was still 5-5 after Southern Rowan reliever Dylan Snider pitched around a leadoff walk in the top of the ninth. Honeycutt’s long drive got fans excited, but it was just a loud out.

Then Winston-Salem finally broke through in the 10th against reliever Matt Brown to make a winner of Bryson Thomas, Post 55’s third pitcher. Thomas pitched a 1-2-3 10th.

“That was really our first tight game,” Hampton said. “Now we’ve tasted what that’s like, and hopefully losing a tough one like this will leave a bitter taste.”

SALISBURY — If the Rowan County has you confused this season, you’re not alone. Even coach Jim Gantt was scratching... read more