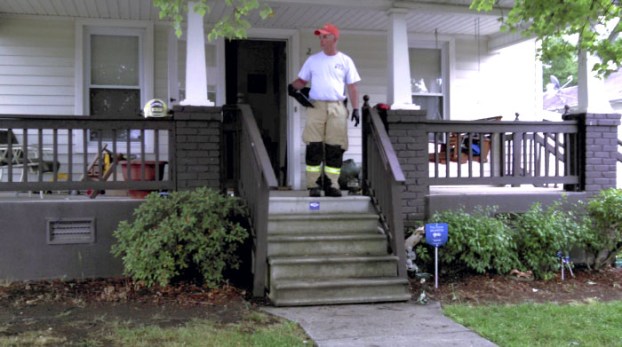 Bobby Burleyson, an investigator with the Rowan County Fire Marshal's Office steps off the front porch of this East Church Street home in China Grove where food left on the stove started a kitchen fire in the back portion of the house. The fire was partially extinguished by China Grove Police and local firefighters. Allana Ansbro/Salisbury Post

Food on stove the cause of China Grove house fire

CHINA GROVE — Fire officials say food left on the stove caused a Wednesday morning fire at an East Church Street home. No one was home at the time of the fire and no injuries were reported.

Someone either passing by or a neighbor called the fire in to authorities sometime after 9 a.m. said China Grove Interim Fire Chief Mike Zimmerman.

Someone entered the house through the front door to determine if occupants were inside, and China Grove Police were right behind the person. A police officer began extinguishing the fire, which started in the kitchen, located in the back portion of the home.

Firefighters were able to completely put out the fire using water foam cans.

The home is a rental property, Zimmerman said.

Man robbed at gunpoint just after being paid

A Salisbury man was robbed Monday morning at gunpoint by a man he recognized and who he says knew he’d... read more