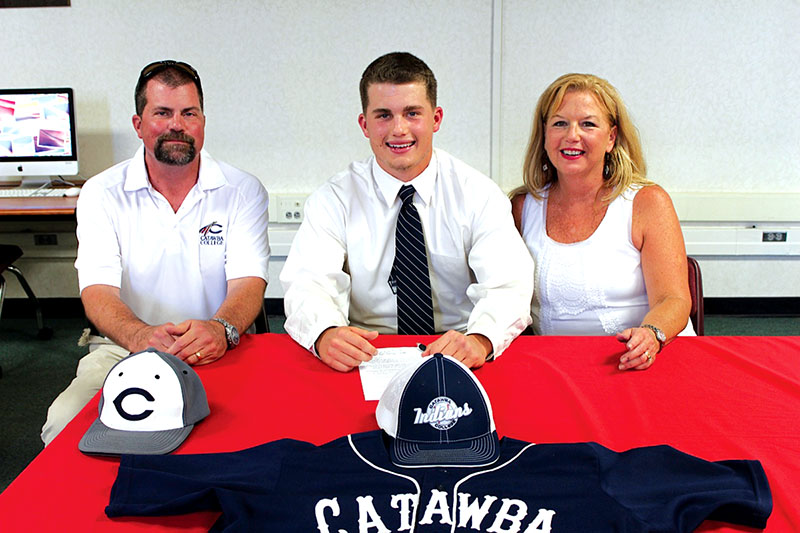 SALISBURY — Riley Myers is one of the 33 quarterbacks in Rowan County football history to throw for more than 2,000 yards in his career, but he figured out early baseball was his game and his future.
“I fell in love with the game,” the Salisbury High senior said. “I guess if I find a wife someday I love as much as baseball, I’ll have a pretty good marriage.”
Myers signed recently with Catawba’s baseball program.
“I like getting those quarterbacks who play baseball because they’re not afraid and they’ll take charge on the field,” Catawba coach Jim Gantt said. “I can see Riley as a closer for us at some point and he’s always been able to swing the bat very well. His defense has to improve for him to play third base for us, but he’s got a chance to be a two-way player.”
Gantt also coaches Rowan County American Legion and is now in his third summer of coaching Myers in Legion baseball. Obviously, he’s liked what he’s seen.
Former Salisbury coach Scott Maddox said Myers worked as hard at baseball as anyone he coached in his 15 seasons.
“Even in football season, he’d find a teammate after practice and keep working on baseball,” Maddox said. “We’ve had really talented kids in recent years (including Appalachian State’s Brian Bauk and Catawba’s Chance Bowden), and they’ve also been some of our hardest-working kids.”
Myers adds talent to his work ethic. His best attribute is a strong throwing arm.
He survived growing pains on the varsity squad as a freshman and sophomore. He had to overcome injuries to his back and elbow to become a tremendous player his last two prep seasons.
As a senior he batted .452 and went 5-3 on the mound with a 1.88 ERA and 65 strikeouts.
“Everyone wants to win a ring and we weren’t able to do that,” Myers said. “But we played hard and played together. We had a strong season (17-9), but we lost some tough 1-0 and 2-1 games.”
Myers allowed only four runs — total — in the three games he lost as a senior. He was voted Central Carolina Conference Pitcher of the Year.
“He’s grown as a player and part of that is because he’s grown so much as a person,” Maddox said. “Offensively, defensively and on the mound he was great as a senior, and he was also a leader. He’ll be really good for Catawba.”
Myers knows he’ll have his opportunity to compete for championships and rings at Catawba. He made trips to watch the Indians during a recent run that took them to a national runner-up finish in Cary.
“Catawba’s doing great things and I’m excited to be joining one of the top D-II programs in the nation,” Myers said. “Playing college baseball has been my dream for a long time.”