Overnight storm takes down 44-year-old tree, the week ahead 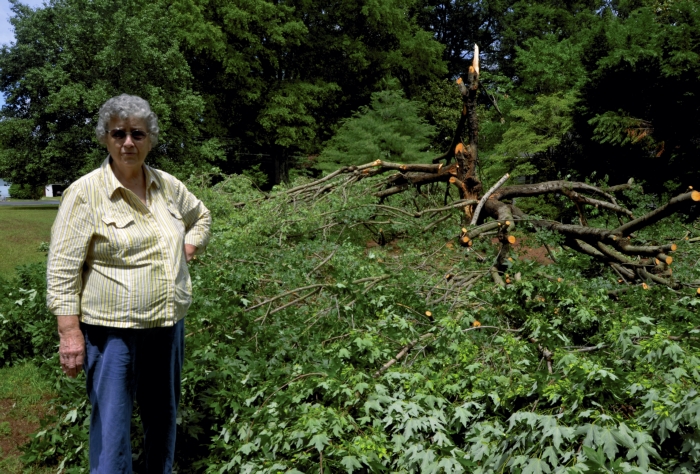 Joann Bostian stands near what is left of a 44-year-old maple tree that she planted when she and her husband moved into their Dukeville Road home. The tree snapped Monday night during a storm. Her son has since began cutting away bigger limbs since the tree is situated close to her home. Officials say the rain will continue into the rest of the week. Shavonne Walker/Salisbury Post

Shortly after Joann Bostian and her husband moved into their Dukeville Road home, she gathered some small trees from Oakdale Church in Spencer and placed the young maple trees throughout the property.

After 44 years, one of the trees, located beside her brick home, snapped Monday during an overnight storm. The tree fell mostly away from her home, which she shares with her son, but several limbs fell closer to her home. The tree was the only damage in her yard.

“I heard a crackling noise,” she said.

Bostian said she spends a lot of time outdoors tending to her yard and flowers so her son has already gotten to work cutting away some of the debris.

Neighbors asked for some of the wood for bonfires, but her son will use the remainder of the wood on a project. He’s done woodworking for much of his life and has already carved a bed out of an old tree from deep in the woods.

The storm made Bostian wary of the other large trees in her yard and she has plans to have another maple tree in her front yard cut down.

Emergency officials reported some damage in other areas of the county including South Fulton Street near Thomas Street and Lincolnton Road for a damaged utility pole.

“We had a few trees down, but we haven’t been advised of any significant damages,” said Frank Thomason, chief of emergency management.

Thomason said Monday was the result of a storm front moving across the east coast. He added the highest probability of rain will be in the mid-afternoon or evening with potentially scattered showers and thunderstorms through Friday.

Flooding isn’t expected, Thomason said, but there could be low lying or standing water.

“In these types of thunderstorms, there’s a potential risk for a significant amount of rainfall to fall in a short amount of time, which could cause flash floods in low lying areas,” he said.

He cautioned drivers against proceeding through the water and urged them to drive safely.

“There’s a good chance of showers over the next several days and they won’t go away anytime soon,” said Meteorologist Jeffrey Taylor said.

He did say the rain will drop off Friday and Saturday and called the weather a “typical summer pattern.”

Those looking to attend the annual Pops at the Post, which will be held Saturday, at the Salisbury Post dock can expect the show to go on as planned, but caution attendees to be prepared for rain, if it occurs. The event features a performance by the Salisbury-Rowan Symphony, led by Maestro David Hagy.

Salisbury Post Publisher Greg Anderson has said the Post has not had to use a rain location in years past.

The event is free to the public and has historically drawn a large crowd and plenty of tailgaters. The kickoff to the event begins at 5 p.m. with the Salisbury Swing Band. The Salisbury Symphony begins its performance at 8 p.m.