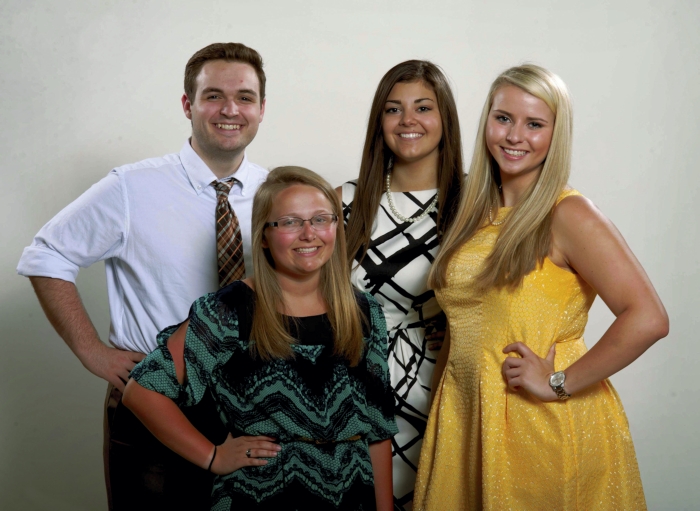 Other extra-curricular activities, honors: Drama Club, International Thespian Society, and being a part of the Fine Arts Program at Carson.

Advice to freshmen: Go and participate in as many things as possible. Use every opportunity to build and develop new relationships.

If I had $10 million dollars, I would: Use it to travel the world. I would want to take in as many places and different cultures as I could.

Advice to freshmen: Would be to not consume yourself with trying to establish an image. The rise of social media, specifically, has distorted the way people have come to perceive others and their selves. It has come to be more about likes, re-tweets, and taking the perfect selfie than enjoying this beautiful gift of life. I would advise those entering high school to have substance behind who they are so that they may be authentic. Instead of trying to just get the good grades, actually take the time to learn so that you may expand your knowledge. Instead of trying to capture every moment with a picture, drop the phone or camera, and just live in the moment so that you can remember the experience, not just taking the picture. Instead of trying to appease everyone by acting a certain way, stay true to your convictions that you may develop character. You are going to try to find who you are in a million different labels, given by yourself or others, but you will never be content until you find your identity in God and in Him alone. It may be difficult to be genuine, but it is by far the most admirable quality to uphold.

Favorite high school memory: I feel that the best memories are merely a collaboration of my “every-days.” Having laughs with my friends during lunch, sharing nerdy jokes during class about the topic of discussion, dressing out for spirit week, meeting someone that I did not know before I was sitting next to them in one of my classes, listening to anecdotes by our teachers so that we can better understand the material, analyzing a poem or passage, painting the spirit rock for one of my friend’s birthdays, going to the baseball games, because it is the best sport to watch, saying the pledge out of breath in the morning because I ran to make it to first block on time…all of these “little things” are what I have come to value the most, and will be what I remember when I look back on the good times of my high school years.

Proudest high school moment: Was also my most humbling one. After being nominated on homecoming court for 2014, God began to lay a scripture on my heart, 1 Peter 5:6. “Humble yourself therefore under the mighty hand of God, that at the right time He may exalt you.” It was the most incredible thing to see this promise fulfilled in such a short vicinity of time. I did not expect to make it on the court in the first place, and yet, when they announced the 2014 Homecoming Queen I heard my own name called. To see so many people, including the other girls on the court, so excited for this news made my heart overflow with joy because, in that moment, I was able to see people drawn explicitly to The Light. That was the time where I felt closest with God, and where I was able to publicly proclaim His name for those who desired to listen, on a platform that He had so graciously allowed me to have.

If I had $10 million, I would: First tithe my ten percent, because God gave me that money and I need to trust enough to give back to Him; then I would pray about how to disperse it from there. If it was within pure intent, I think it would be amazing to go cross-country stopping at different restaurants or public locations and providing financially for people anonymously, so that they would know that God will take care of them. Another dream of mine is to travel to Argentina. I would like to spend a few months immersed in the culture, learning about the people there, and sharing the Gospel with them that they may be given the opportunity to accept Jesus as their Lord and Savior. However the love of God may be shared to the fullest, however God would be brought glory and honor, that is how I would like to spend the money.

High school clubs/ sports: The only spectator sport I can stomach is politics, and to be quite frank I didn’t know we had clubs.

Other extra-curricular activities, honors: Theatre. Tons of it.

Advice to freshman: There’s nothing to be said for High School academics, you’ve done the exact same thing since Kindergarten, they’re just more pretentious about it now. What you need to know is about people, and its not my advice, it’s Ernest Hemingway’s. “The best way to find out if you can trust somebody is to trust them.” Make friends. Care about them.

Favorite high school memory: Through the course of my junior year, I was bounced from Central Davidson (which should be in contention for the worst place on Earth. Somewhere on the list between an unclean Port-a-Potty or North Korea) to NCSSM (fascist wonderland) before being left in the nebulous place between “here” and “over there”. Then Carson called on a Friday and I started on a Monday. That first Monday here is my favorite high school memory.

If I had $10 million, I would: Is this a bad time for a Barenaked Ladies reference? In all actuality, that’s far too much money for one man. Wisely invested into mutual funds and stocks with consistent projected growth, dividends would be large enough to funnel into charities in perpetuity. On a more ridiculous note: I’d head West to see if there was a spot for me in Hollywood. Much easier to be a starving artist if you’re not actually starving.

Advice to freshmen: Friendships will get you through high school, but education will get you through the rest of your life.
Favorite high school memory: My favorite high school memory would be organizing a massive present for my most influential teacher on Teacher Appreciation Week. Mrs. Kelly Reynolds, Carson High School’s Teacher of the Year, inspired me from the first moment I entered her class room freshman year. From that class, I decided what I wanted to do for the rest of my life, which is becoming a high school history teacher. The gift that my friend Austin Pinion (a fellow historian) and I put together, included her favorite drinks (Diet Mountain Dew), her favorite candies (Reese’s cups), Debbie Cakes with an inside joke about the French Revolution, souvenirs from London and Paris and a heartfelt letter that we hope she cherishes for a long time to come.
Proudest high school moment: The proudest moment of my high school career was moving from fifteenth in class rank my freshman year, to valedictorian my senior year.
If I had $10 million, I would: start a reinvigoration program of the state’s salary for teachers. There are nearly 100,000 teachers in North Carolina, and the state is ranked 46th in average teacher salary. My mother is a teacher, and is very underrated in reference to the money she makes. Whenever I become a teacher in the future, I hope that this state begins to value teachers, students, and education, more than it does now.