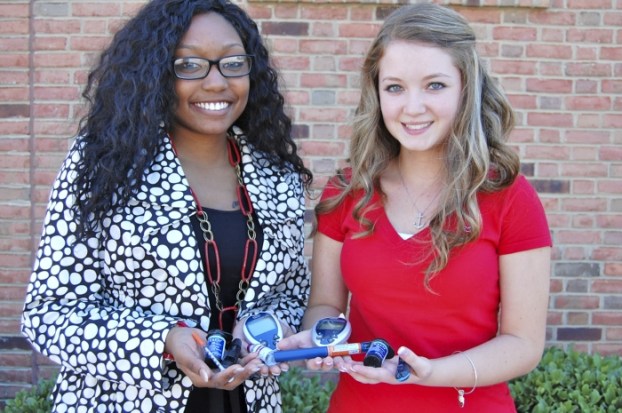 Tameka Nock and Lindsay Veros display the many devices and medications they use to keep their diabetes under control. Megan Braun/Salisbury Post

Salisbury High School seniors Tameiya Nock and Lindsay Veros have struggled with their health throughout their high school years.

Nock, 18, was diagnosed with type 1 diabetes when she was 11. Type 1 diabetes is a condition in which the pancreas cannot produce adequate insulin.

Having a family history of diabetes, her mother decided it was a good idea to get her checked when she was at the doctor for a separate illness. After being diagnosed, Nock said, she tried to hide it from everyone at school because she was shy and embarrassed. In high school, she started being more open to her condition.

Veros was diagnosed with type 1 diabetes in October 2013 when she was in the hospital for a virus that doctors say attacked her pancreas, therefor damaging the pancreatic cells and causing her to stop producing insulin.

“Having diabetes has made me healthier because I am always looking at nutrition facts and watching what I am eating,” Veros said. “My mom always comes home with new drinks and stuff that have ‘zero carbs’ and wants me to try them,” she added, laughing.

Before each meal, the girls have to go through a strenuous process in order to prepare themselves. The girls are “carbohydrate sensitive,” meaning that their intake of carbs must be limited in order for their body to properly break them down. First, they must take their blood sugar, and if it is too high, they must take enough insulin to correct it. Then, after counting the carbs in the foods they plan to eat, take enough insulin to cover their carbs.

“It’s hard not being able to eat everything you want to when you want to. You have to think about the effects that food has before you eat it,” Nock said.

Going out to eat is especially difficult. With the help of mobile apps and books, they can usually figure out the carbohydrate counts in food.

“At restaurants, you don’t know everything that is in the food, so it is a little more challenging to count the carbs,” Nock said.

In the fall, Nock will be at the Art Institute of Charlotte majoring in fashion design with hopes of eventually owning her own clothing line. Veros is headed to North Carolina State University as a psychology major and will eventually earn her doctorate to become a psychiatrist.

GRANITE QUARRY — It was brief, but the Granite Quarry Board of Aldermen continued a personnel-related closed session Tuesday afternoon.... read more