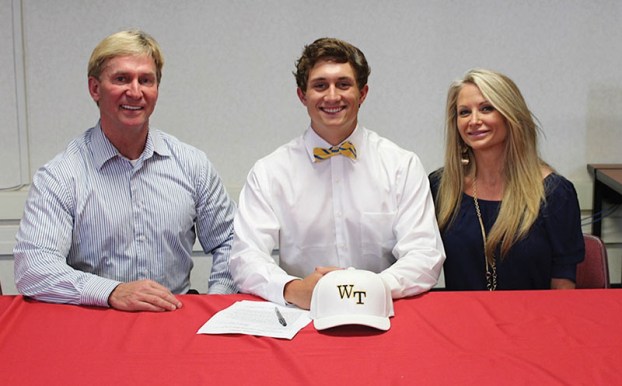 SUBMITTED PHOTO J.T. Austin (center) is going to play baseball at Wake Technical Community College in Raleigh. Present at a celebration for Austin were his parents John (left) and Angie Austin (right).

“I really didn’t know who he was,” said Scott Maddox, who recently resigned as Salisbury’s head coach. “But he helped us. I wish we’d had him more than his senior year.”

Maddox contacted several schools about Austin, who has good speed and a strong throwing arm, and he’ll continue his education and baseball career at Wake Technical Community College in Raleigh.

That’s the same school former North Rowan outfielder Matt Mauldin played for this season. Wake Tech has a rising program and made the national rankings for the first time in 2015.

The Eagles play some home games at the USA Training Center in Cary where Catawba competed in the recent Division II National Championships.

Austin explained that he grew up playing with some of Rowan County’s talented seniors — Salisbury’s Riley Myers, Carson’s Heath Mitchem and East Rowan’s Joseph Peeler — before moving to Cabarrus County.

He played for Jay M. Robinson and was enrolled at Cox Mill for a semester before coming back to Rowan County.

“My dad is from here and my grandparents were here,” Austin said. “I was coming back to play with some old friends, and I liked that.”

“Anytime a new guy comes in, that means he took someone’s spot and that can cause difficulties,” Maddox said. “But J.T. is such a good guy there was never a problem. He was accepted right away.”

Acceptance was easy because Austin was a good player and was willing to play anywhere.

“He’s an infielder by trade, and I believe second base may be his best position.” Maddox said. “He played some shortstop for us when Riley Myers pitched, but mostly he played the outfield because that’s where we needed him most.”

Austin made the most of learning a new position.

“The outfield was definitely a change, but it helped me,” Austin said. “I got faster. I stole bases like I’d never done before.”

Austin made a memorable debut for the Hornets when he joined Myers and Ryan Jones for back-to-back-to-back homers in a victory against North Forsyth on opening day.

Austin finished with three homers, batted .377 and was among the team leaders with 32 runs scored, 22 RBIs and 17 steals.

When Salisbury beat West Davidson 2-1 — the only Central Carolina Conference loss for the Green Dragons — Austin’s run-scoring triple was the key blow.

In recent days, Austin has made his debut with the Rowan County American Legion team.

Once again he’s playing where he’s needed most — in the outfield.