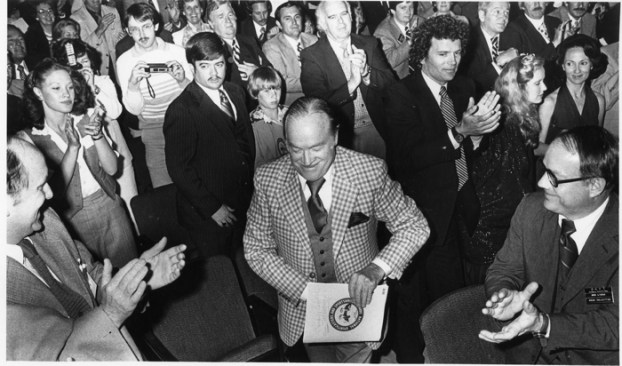 Yes, that’s legendary entertainer Bob Hope making his way to the Keppel Auditorium stage at Catawba College in 1979 to induct friend and actor John Wayne into the National Sportscasters and Sportswriters Hall of Fame April 15, 1979. Hope was 75 at the time. He actually was in Salisbury at least three times. In 1940, Hope and Jerry Colonna were driving through and had called ahead to Francis Luther at the Capitol Theater, saying they wanted to stop for supper, Hope had a steak at the Red Swan Cafe on West Innes Street and spent a couple of hours in town. After coming here in 1979 for the NSSA, Hope returned to Salisbury June 3, 1989, for “An Evening with Bob Hope,” a fundraiser for Rowan Memorial Hospital’s foundation. The night featured Hope’s comedy and songs with the Salisbury Symphony. The event barely broke even after paying Hope’s $60,000 fee to entertain. He later sent back a check for $5,000 as his own contribution to the hospital foundation. Hope died in 2003 at the age of 100. The NSSA’s annual gathering is coming up this weekend.