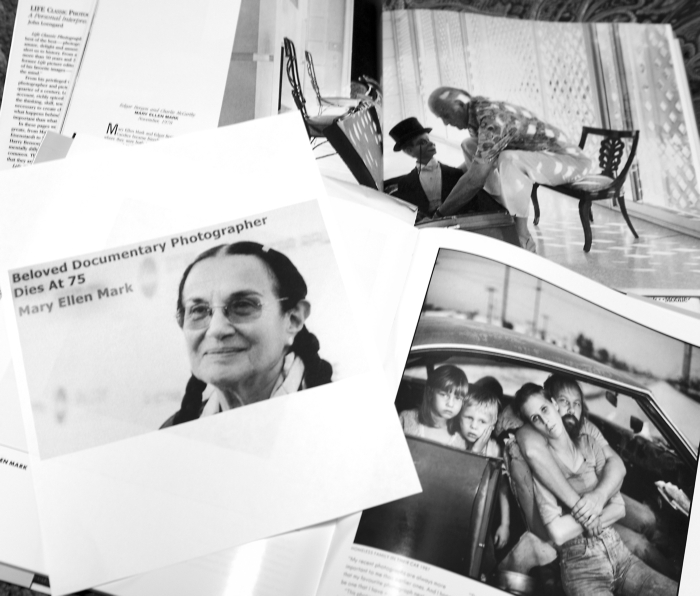 Documentary photographer Mary Ellen Mark who died on May 25 at 75 years old made the two famous photos in this photo. The top photo is ventriloquist Edgar bergen and Charlie McCarthy photographed in Nov. 1978. The bottom photo is a Homeless Family in their car photographed in 1987. It was made for Life Magazine of the family that was living in their car.

Documentary photographer Mary Ellen Mark died one week ago, on May 25, at the age of 75.

Why write a column about Mary Ellen in the Salisbury Post? She doesn’t live here. She is not from Salisbury. Most likely, she has never been to Salisbury. Most of us have looked at and admired her photography for years in Life and Look magazines but didn’t know who she was. She has published 19 books of her works. She has been a participant in some of the “Day In the Life” series of books. She has remained in the top 100 photographers in the world.

I had the privilege of hearing her speak several years ago at the Atlanta Seminar on Photojournalism. The hotel ballroom had some 300 photographers and students gathered to hear her talk about her approach to photography. She began her career in documentary photojournalism at the age of 22 after getting her degree in painting at the University of Pennsylvania. She called herself a “street photographer.” She felt that if you could make it as a street photographer, you could cover any assignment.

When Mary Ellen speaks, most of us who honor the profession of photojournalism listen to her words of wisdom.

Lyle Reter, a critic at the School of Visual Arts, said her photos “combine  artistry with photojournalism.” In this age, when everyone is a citizen photojournalist, running around with cameras, cellphones, and video cameras, some feel that we no longer need professional photographers. There are plenty of folks taking photos. Reter points out that we do need professional photojournalists for their experience, their eyes on the world, for their communication skills and for their understanding of their subjects. These communicators are special. Mary Ellen Mark was such a person.

Mark never stopped using her Leica cameras and shooting black and white film. She even bragged that her old cameras were 25 years old and still worked perfectly, after an occasional cleaning. Some called her “a tough cookie.”

Her good friend Kelly Cutrone, who announced Mark’s death last Monday, said, “Mary Ellen had the unique ability to see inside. She was like a snake charmer of the soul.”

Speaking at the seminar, Mary Ellen told us that her photos are emotional. She looked for humor, irony, but also intensity. This is what we strive for in our work, she added. She wanted to touch people and make them feel the emotions she felt.

Going on with her talk, she told us that she never thought that being a photographer was easy. Instead, it is difficult and always has been. Her words: “To be great at anything, it is hard. It is easy to be just OK at something, but it is hard to be great.”

Today it is most difficult for a photojournalist to make a living and find work.  Mark tells us to expect it to be tough today. However, if you love it, you must stick to it and do it. You will never forgive yourself if you don’t do it.

Creative folks communicate their human experience through their works. We need to look beyond ourselves when looking at these creative folks’ work. Today’s catch phase would be “looking beyond or outside the box.”

Magazines used to look for documentary photographers, but now they only want photos of celebrities. Most photojournalists’ assignments today have taken on the role of being more commercial and less documentary, more entertaining and less thought provoking.

The world will miss Mark Ellen Mark’s wisdom, but her photos remain with us.