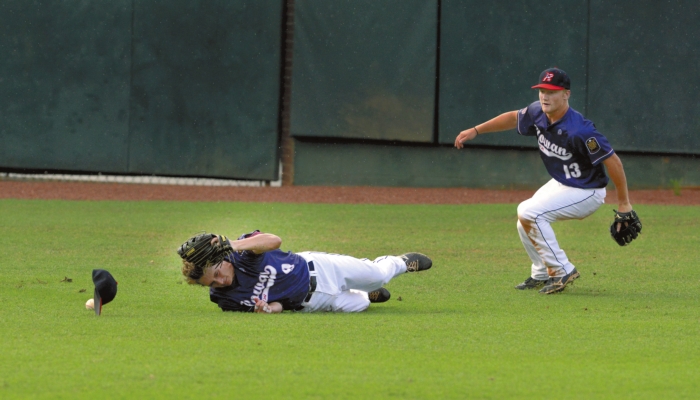 SALISBURY — Lee Poteat had the most critical at-bat of the game in the eighth inning, and he took a 3-2 pitch with the bases loaded for a walk that put Rowan County on the road to an 8-4 victory against Mooresville here Monday night.

“I was just trying to stay calm and I was getting a lot of encouragement from the dugout,” Poteat said. “That 3-2 pitch was close, but it was little bit outside.”
The first loss for highly regarded Mooresville (5-1) and the first win for still-coming-together Rowan County (1-2) intersected at soggy Newman Park. There was a heavy rain just before the game.
“The guys are still in school and we’ve got a whole lot we need to work on,” Rowan County coach Jim Gantt said. “But we’ll hit better and we’ll get a lot better than we are now.”

The game was Gantt’s first since returning from Cary and Catawba College’s run at the NCAA II National Championship tournament. Gantt coached the Indians to a school-best national runner-up finish, losing in the title game on Saturday to Tampa, 3-1.

Rowan used starter Riley Myers for five innings. Bryan Ketchie was in command in the sixth and seventh, but Rowan needed Ketchie, Cory Fries and Alex Hamilton to survive the eighth frame.
Down 4-2 heading to the bottom of the eighth, Rowan’s offense, silent since the first inning, came alive with a six-run outburst that decided the game.
Juan Garcia’s second double of the night — a booming shot off the center-field wall — began the eighth. Heath Mitchem’s walk and Hunter Shepherd’s lined single filled the bases. Jeremy Simpson lashed a single up the middle to cut Rowan’s deficit to 4-3, and Dalton Lankford drew a walk to force home a run to tie the game.
“We didn’t play very well, but guys did some battling at the end,” Gantt said.
After Poteat’s walk put Rowan ahead, leadoff man Harrison Baucom drilled a shot to the left-center gap to break it open.
“I got a high fastball and saw it well out of his hand,” Baucom said. “But it was really the walks in front of that hit that were key. Guys realized we weren’t going to win this game with one swing. They just went up there to compete and one after another they did their jobs.”
Hamilton, a submariner, was the winning pitcher. He finished off Mooresville in the ninth with a snappy 4-6-3 double play.
“Hamilton is going to get ground balls,” Gantt said. “With a four-run lead, he was just about sure to get a ground ball at an infielder for a double play before Mooresville could come back.”
Rowan scored twice in the first inning with Baucom, Dustin Ritchie, Garcia and Mitchem delivering hits.
Myers protected that lead through steady raindrops in the fourth, but the visitors suddenly got to him with two men out in fifth. Four straight hits from the top of the lineup gave Mooresville a 3-2 lead.
“They hit fastballs,” Myers said. “The location on them wasn’t terrible, but I needed to be able to throw something besides the fastball for strikes.”
Held in check by Mooresville hurlers Gabe Kascenga and Garrett Ward most of the game, Rowan was in trouble. But then seven straight batters reached with hits or walks in the eighth inning to pull it out.
“When they got the bases loaded with no outs in the eighth, you knew they were going to get some runs,” Mooresville coach Robert Little said. “But we swung the bats and we played very good baseball for seven innings. Hopefully, the next time we come here, we’ll be playing for something important.”
NOTES: Rowan’s Caleb Link sprained an ankle while running from first to second on his hit down the right-field line. … Mooresville starts Area III league play Tuesday against Greensboro. Rowan is making up Sunday’s rainout at Davidson County on Tuesday. Rowan won’t play a league game until June 7  … Rowan won’t have the West Rowan players Tuesday due to the school’s athletic banquet.