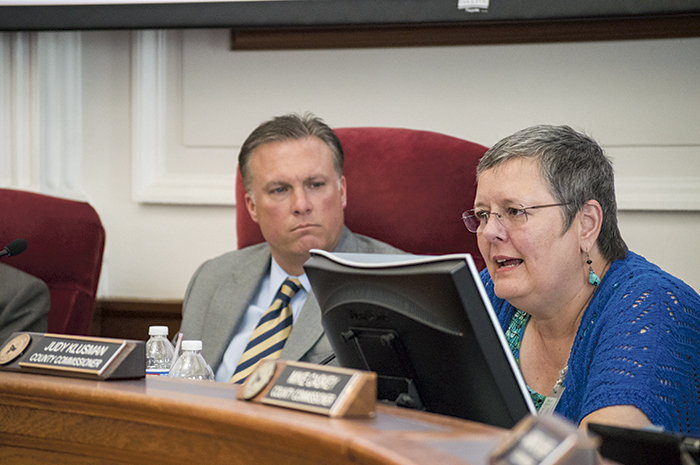 Rowan County Commissioners on Monday unanimously voted to appeal a federal judge’s ruling over prayer practices from 2007 to 2013.

Before the vote, each commissioner gave an impassioned speech explaining his or her vote. County Commissioners Chairman Greg Edds spoke first in a lengthy soliloquy that detailed previous and related lawsuits to Rowan’s case. He used the legal arguments in related lawsuits as reasoning for his vote to support an appeal.

All commissioners voted in favor of an appeal.

Commissioner Judy Klusman who spoke fourth out of the five commissioners said the appeal wasn’t just for practicing Christians, but for all faith traditions around the world.

“What’s really at risk is our right to free speech,” Klusman said. “If we don’t have that right, what will come next?”

The vote came after a large group of speakers addressed the commissioners during a public comment period. A small majority of speakers spoke in favor of an appeal.

The Rowan County Commission chambers were packed to capacity.

Before the meeting, several attendees also displayed signs outside of the building supporting an appeal.

The vote comes after a month after a federal judge’s ruling declaring prayer practices from 2007 to 2013 unconstitutional. Commissioners adopted an alternate prayer policy and held a three-hour closed session prior in April before coming to a decision.

Federal Judge James Beaty, a judge for North Carolina’s Middle District, on May 4 declared commissioners’ prayer practices from 2007 to 2013 unconstitutional and included a permanent injunction. In his decision, Beaty mentioned commissioners’ practice of asking attendees to stand before prayers without mentioning options to leave the room and took issue with the practice of prayers exclusively being given by commissioners.

Shortly after the judge’s decision, commissioners invoked an alternate prayer policy, which appointed Sheriff’s Office Chaplain Michael Taylor, a christian, to give opening invocations instead of commissioners. The alternate prayer policy was drafted in 2013, shortly after the American Civil Liberties Union filed a lawsuit on behalf of plaintiffs Nan Lund, Liesa Montag-Siegel and Robert Voelker.

Taylor gave Monday’s opening invocation . His prayers have been similar to those offered by commissioners after the initial lawsuit was filed. Taylor has, however, used specifically Christian works in his prayers. His prayer on Monday specifically ended with “in Jesus name.”

This story will be updated as more information becomes available.