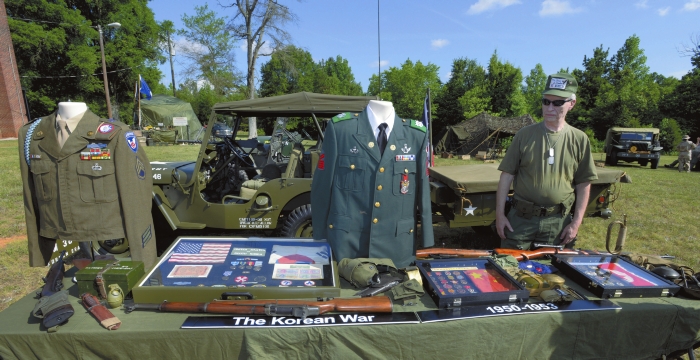 Wayne Hinshaw / for the Salisbury Post This exhibit is all from the Korean War 1950-1953 period at the Price of Freedom Museum’s D-Day event. The items belong to Sonny Karriker (on the right) who is the president of the Piedmont Military Vehicle Preservationist Association. The uniform on the left has a glider patch on the left shoulder which is rare. The uniform on the right is a South Korean uniform.

CHINA GROVE — Artist John Hartley had a lot of interruptions Saturday while fleshing out his acrylic painting, a scene depicting the U.S. charge on the beaches of Normandy.

But he wasn’t complaining. Working on the painting at the Price of Freedom’s “D-Day Remembrance” reminded him of the time in 1999 when he accompanied his late father, U.S. Army veteran Robert “Bobby” Hartley, to watch the movie “Saving Private Ryan,” whose opening scene showed how brutal that D-Day landing was.

It was as though Bobby Hartley was looking over his son’s shoulder Saturday. In the corner, John had placed a portrait he had painted of his father, dressed in his Army gear during World War II.

Bobby Hartley tricked the Army and joined up in 1944 when he was only 15. As a sergeant for the 11th Airborne, he was a paratrooper and glider pilot. Toward the war’s end, Hartley island-hopped through the Pacific, and after the war, he guarded the prisoners at Sugamo Prison in Japan, where 27 Class A war criminals were hung, including Heideki Tojo.

It seemed more than coincidence to John Hartley that his father collapsed on Veterans Day last November and never regained consciousness before dying Nov. 15.

All kinds of memories of his father came flooding back for the artist as he kept painting and kept being interrupted Saturday. Close to 100 of the paintings hanging in the halls and rooms of Price of Freedom Museum were done by Hartley, and founder Bobby Mault loved that visitors could see him at work Saturday.

“All of them are for sale, I guess,” Hartley said of the paintings, “but I don’t do it for the money.”

Other than Hartley, the real stars of Saturday’s D-Day Remembrance, which honored veterans of all American wars, were the military vehicles on display, thanks to the Piedmont Military Vehicle Preservation Association, a cosponsor of the event.

Restorations don’t get much sweeter than Sonny Karriker’s Korean War-era 1952 Willys M38 and its M100 trailer.

He located the Willys seven years ago in the upper reaches of North Carolina and totally restored it. Finding parts was difficult, Karriker said, because this particular model was only in production about a year-and-a-half, from 1951 to June of 1952.

Karriker, although he’s not a veteran himself, has made it his mission over recent years to focus on the Korean War and display all the artifacts he has collected in connection to it.

“It’s the forgotten war,” he said, noting his was the only Korean War display at Saturday’s event and how that’s often the case. “These guys deserve to be honored and remembered.”

Korean War veterans naturally gravitate to Karriker’s vehicle first, then his display table. “They’ll come in, and they just want to sit in the Jeep,” Karriker said, “and they’ll look at some of the stuff and say, ‘I remember this.'”

Some of Karriker’s rarer artifacts relate to the North Korea side, including a North Korean flag and a complete pack taken from the body of a dead soldier. It included the soldier’s identification, a picture of his girlfriend, ammunition pouch, knife, razor, comb, metal chopsticks, sake cup, rice bowls and silk scarves that were probably gifts from the girlfriend.

“These were a soldier’s personal possessions,” Karriker said. “To me, they are priceless because of the story. That is so special because of that.”

An American friend who travels to China was able to secure this rare find for Karriker.

“Of course, I had to pay dearly for it,” he added.

Immediately next to Karriker, Bill Craddock, president of the Rowan County Veterans Council, had parked his restored 1953 M38-A1 from the Korean War era. He salvaged it from a junkyard in Tennessee.

In the back of the Jeep, Craddock had set up a 30-caliber machine gun that was firing blanks through a mixture of propane and oxygen, connected to a 12-volt battery.

Craddock remembers this setup being used during mock warfare at night when flames would come out of the machine gun barrel. “It’s very impressive,” he said.

“I’m more of a SWAT team person,” he said when the shooting was over.

During the day Saturday, Terry Oglethorpe, a regular volunteer at the Price of Freedom Museum, led interactive, simulated military drills for children that including the firing of blanks.

“You don’t have to duck, unless you want to,” Karriker said.

Collecting and restoring military vehicles has become a family affair for Roger Sellers and his sons, Matt and Chip.

Roger’s pride and joy is a 1951 M37 Dodge Power Wagon used in Korea and Vietnam. The three-quarter-ton truck had multiple uses, such as troop transport, as a command vehicle and for hauling communications equipment.

The Sellers clan purchased a trailer to go with it.

“When we got it, it was in rough, rough, rough shape,” Matt Sellers said. They bought another truck just to help furnish the parts they needed.

Roger Sellers said a lot of these same Dodge Power Wagons found their way to volunteer fire departments, which used them as brush trucks and for off-road chores.

The family also brought a 1997 M1078, 2.5-ton LMTV, which had been used in the Middle East. “This is the newest vehicle we’ve gotten, so we haven’t done a whole lot with it,” Matt Sellers said of the giant truck.

They purchased it from a man in Lincolnton who had bought it at a military auction.

Roger, Chip and Matt Sellers also had their M274 mechanical mule, sort of a John Deere Gator on steroids, which operates on a two-cylinder Hercules engine. The mechanical mules were used into the 1980s.

Matt Sellers said it could go anywhere with its four-wheel drive and steering. It only weighs about 975 pounds, and its magnesium bed helped in keeping it lightweight.

Phil Leonard, retired from the Salisbury Police Department since 2000, has gotten deeply into collecting military artifacts from World War I to modern day. He picks up things at estate sales, military auctions and flea markets.

“If I can afford it, I buy it,” Leonard said from behind display tables filled with all manner of military gear. If he hadn’t had the help of his wife, Pat, Phil said, “I’d probably still be putting stuff out.”

Pat Leonard said she enjoys coming to events such as the D-Day Remembrance, a place with plenty of local veterans and pretty good stories.

One of Phil’s favorite items on display was a laser transmitter gun — “the God gun,” he called it, remembering its use in training when he was with the Air Force.

Another of his prized possession is a 1966 M151 Air Force security Jeep, which he has fully restored but kept at home Saturday.

It’s also a piece of art, meaning it would have fit right in at the D-Day Remembrance.