Wayne Hinshaw: A visit to the Georgia Aquarium 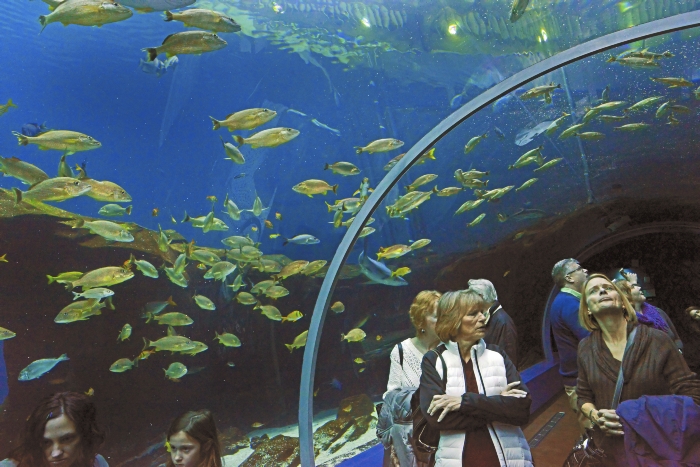 No doubt the most amazing thing about the Georgia Aquarium is walking in the glass tunnel with the fish. You share the space with the fish, both looking at and examaining each other. Wayne Hinshaw, for the Salisbury Post

“Just look at the world around you,

Right here on the ocean floor,

Such wonderful things surround you,

What more is you looking for?”

Atlanta — What more could anyone want, other than going to the Georgia Aquarium in mid-town Atlanta’s Olympic Park? Walking around in the aquarium is an underwater experience. “What more is you looking for?”

Walking into the Ocean Voyager section, it is all darkness as you enter the underwater tunnel. Wow! Here I am walking under 6 million gallons of salt water filled with thousands of sea creatures. Walking through the darkness of the tunnel, with water on both sides and on top of me, emotionally, it is like every creature reaches out for me, pulling me to this and that, back and forth. With camera at my eye, it seems every fish, every jelly fish, every piece of coral, every whale shark, everything is calling for me to photograph it.

I am trying to pour every bit of the magic and beauty that I see around me into that Nikon camera at my eye. Am I photographing dreams or is it the real world? Fish with big, wide mouths and fish with little, sad mouths are looking down on me. Are they thinking, what is this man doing in my world? There are yellow fish with black markings. Fish with blue stripes. Gray fish float past me. Schools of fish, numbering in the hundreds, swim overhead. The giant whale shark, with its orangey color and spots, is scary. He makes the other fish and the people look microscopic. There are four of them in the tank.

There are other sections of the aquarium to see. The African penguins look like miniature penguins in the Cold Water Quest area. They can travel 25 mph in the wild. One chooses to come up to the glass where a little girl sits. She reaches out to him and he puts his nose to the glass where she rests her hand. Maybe he wants his head rubbed?

It is special to be able to touch and rub living hard and soft coral reefs in the Tropical Diver section. All the colors in the color spectrum are represented in the touch tank of coral and star fish. There are other colorful things, and I don’t know what they are. They are beautiful.

The moon jellyfish sure are weird. You can see through their bodies as they float in the water. The Atlantic sea nettle looks like floating silk, but be warned that their long tentacles can sting. The little red piranha comes up to the glass. I’m sure the fish curled up his lips and showed his sharp teeth to me. Maybe he didn’t, but I was afraid that he would.

The little striped eel catfish are the size of sardines. I shouldn’t say that. Sardines might be a relative to the eel catfish who have been canned. There are hundreds of the eel catfish with striped bodies and catlike faces. I’m told they have venomous sting that can be serious. I’m thankful for the glass tank with those little fellows.

There is a dolphin show where the bottlenose dolphins swim around the pool with humans riding on their backs. The dolphins stand on their tail fins and walk on the water. I kid you not. The 6-foot-long dolphins scurry across the pool out of the water, walking on their tails. I can’t show a photo of that spectacle since the employees said taking photos of the act would get you removed from the show. I can tell you that when those big dolphins got off their tails and hit the water again, they splattered water all the way to the fifth row of spectators.

It is a good place to sing along with Ringo Starr of the Beatles and the song “Octopus’s Garden.”

“We would sing and dance around,

Because we know we can’t be found,

In an octopus’ garden in the shade.

“We would be so happy you and me,

No one there to tell us what to do,

In an octopus’s garden with you.”